The Motor City’s startup scene is, well, in its earliest startup phase. There’s no need to rehash the history of fleeing businesses, corruption, and ensuing poverty and crime that have plagued Detroit for decades. Let’s just say it’s a metro area that has seen better days.

But just ’cause Detroit’s been down doesn’t mean it’s out for the count. Last week, Chase-backed Startup Week, in the form of Detroit Startup Week, brought its special brand of “entrepreneurial celebration” to the city once made grand by the automotive industry, that sweet soul sound, and of course, the Coney Dog (or at least some version of it).

Overall, there was more conversation than revelation. Detroit is pretty low on local startups, so speeches, panel discussions, and “fireside chats” with experts that had already run and won the entrepreneurial race ruled the day. Attendees received plenty of advice and networking opportunities, and there were several notable insights into Motown’s potential as a new startup mecca…plus a few other things worth paying attention to.

Brief introductory remarks from Mayor Mike Duggan and his Head of Innovation and Entrepreneurship, Jill Ford, gave way to a somewhat tepid opening keynote from Bill Ford, Jr. (no relation to Jill), executive chairman of a little manufacturing/finance concern that goes by the name of Ford Motor Company. His business experience is indisputable, but given the family business (we’re looking at a 4th-generation Ford leader here) startups are about as foreign to Bill as flying coach and attending state schools. Ford is also technically headquartered in Dearborn now, just outside Detroit proper, so…

The basic message? The “way people move” is changing. Detroit could and should be a leader in that area. He pointed out that Detroit still has more engineers living there than any other state, and talked a fair amount about Ford’s efforts to reclaim its prowess in the mobility space with the help of local startups. Advice for the many attendees who did not already have a contract with Ford was slim, consisting primarily of “innovation good, Detroit good, business good, Ford good,” but as far as opening remarks go for these kinds of things, it seems to have gone…good. 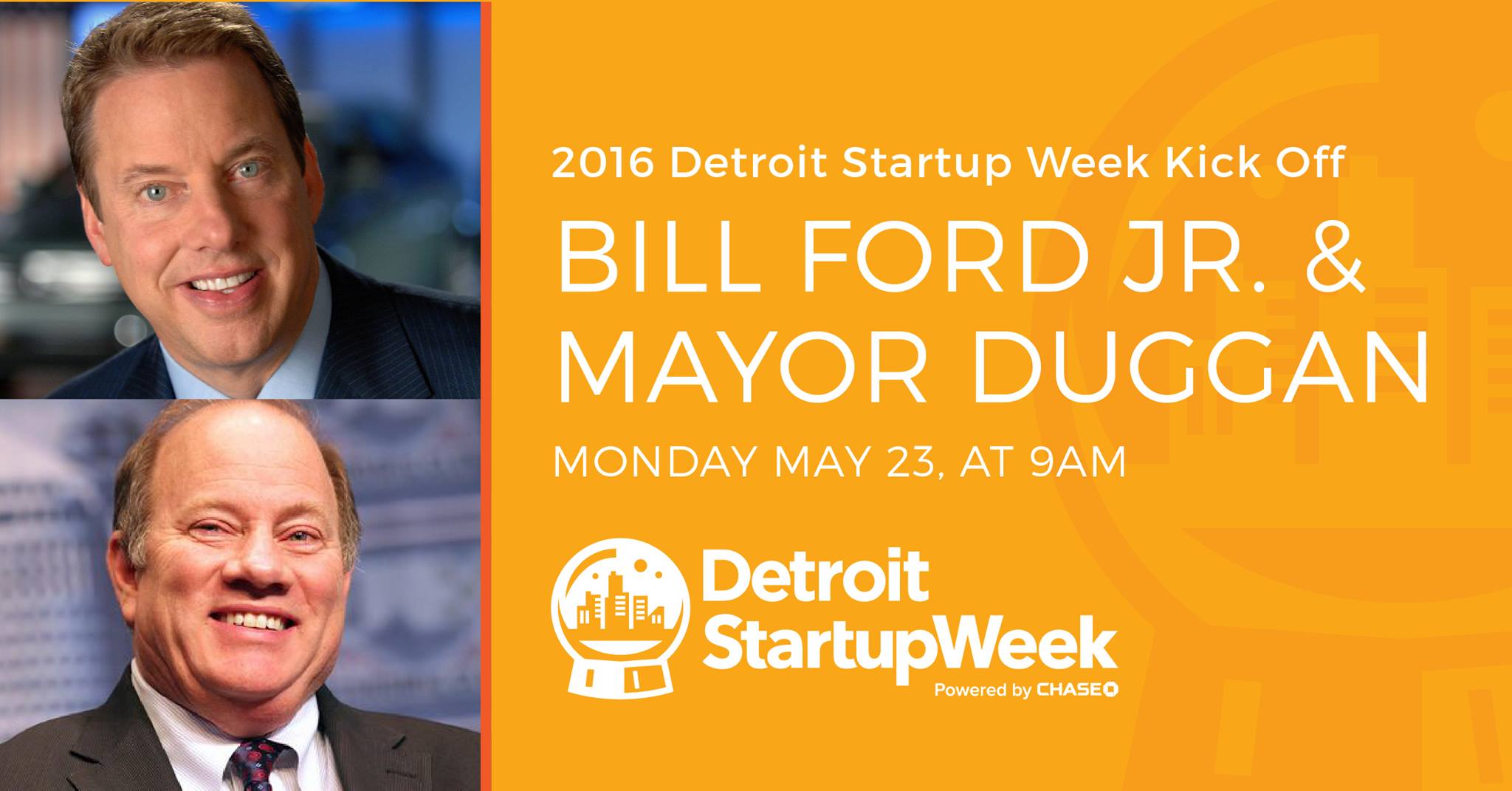 A series of workshops, architecture tours, and other smaller events filled out the first day of Detroit Startup Week. There was also a “fireside chat” from Bob Borchelt of GE Digital, the only other notable event of the day.

(Let me interject here: we need to quit with the fucking “Fireside Chats.” Roosevelt wasn’t even in front of a fireplace when he gave the original fireside chats 500 years ago…over the radio. Today they’re nothing but speeches/lectures, frequently followed by a Q&A session where the speaker is sitting down the whole time. If they need a special name, we should call them “Lazy Lectures”, as I plan to do for the remainder of this piece.)

And what did Bob have to say? Basically that the Internet of Things is helping them achieve more automation, better quality control, greater efficiency, yadda yadda yadda. Fun stuff to hear from a company on the cutting edge, but nothing groundbreaking with regards to new technologies or capabilities unveiled.

At 1pm the week’s keynote address was delivered by Pamela Lewis, director of the New Economy Initiative, a project of the Community Foundation for Southeast Michigan. The group funds local businesses and other economic development initiatives, and has played a major role in revitalizing the Detroit-area economy—which does appear to be having a rally at the moment. The list of talking points for Lewis’s address was wide and ranging; from demographic diversity in potential investors to the need to balance innovation and commerce to commenting on the region’s growth in entrepreneurship. Generally, her central theme was similar to Ford’s: Detroit good, business good, New Economic Initiative good, diversity good. 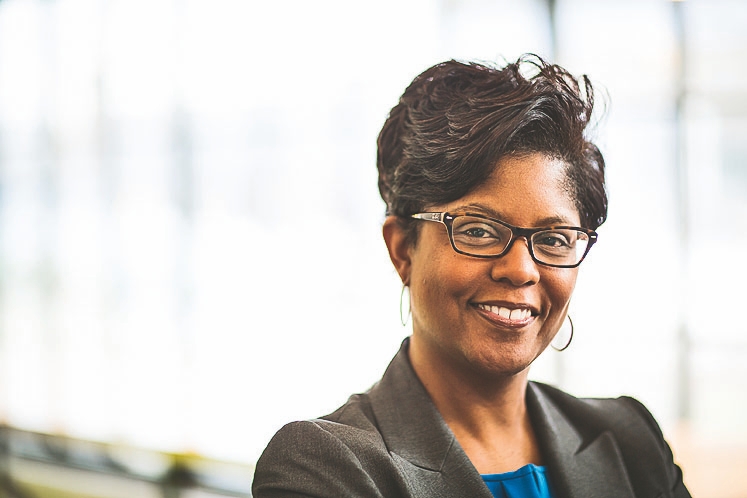 The Lazy Lecture with Mayor Mike Duggan and Chase Chair and CEO Jamie Dimon caused a bit more of a stir. Chase entered a five year, $100 million investment/donation plan with Detroit a few years back, and it has had no small impact on the city’s revitalization. The company has stuck around, too, involving itself in a variety of programs meant to boost educational, networking, and resource opportunities for burgeoning businesses. One audience member said the amount of the cash investment amounted to a “rounding error” to a bank the size of Chase, to which Dimon took exception:

“That’s dead wrong. Every dollar I spend is as important to me as every dollar you spend. We are the biggest bank in Michigan and we’ve always believed that you have to be a good citizen.”

His other thoughts on citizenship? Well, that it should be easier to get here in the US, and that we should be more welcoming of the many immigrants who want to work within our borders. He also called for a negative income tax for lower-wage workers and insisted that federal spending on infrastructure needed to happen, like, yesterday. Unsurprisingly, these sentiments were met with resounding agreement. Whether the hungry startup hopefuls who were cheering left with any concrete advice is hard to say.

On Day 3, there was a Lazy Lecture from Brian Rudolph, founder of chickpea pasta maker Banza, and a peer-to-peer support group for “mompreneurs” (the whole “___preneurs” fad has got to go, too, but that’s a rant for another day). There was another Lazy Lecture from the founders of successful subscription newsletter service theSkimm…plenty of “here’s how I built my business” talk and the usual questions and answers that follow. Not a whole lot happened on Day 3 that’s worthy of notable digital ink or significant headspace.

If you were there for the Happy Hour Mob Pitch sponsored by BRUT Detroit you probably had a blast, but no news on any sudden funding from this alcohol-fueled frenzy.

One major highlight (though that’s maybe not the right word) from Day 4 of Detroit Startup Week was a Google Street View-look at just how badly Detroit was hit by the “economic hurricane” circa 2008 (also the year Detroit’s then-mayor pled guilty to a few of the crimes he committed, most of which were related to his pilfering of the city’s coffers). Another highlight was an Internet of Things lecture from Nicole Johnson Scheffler of CISCO (her LinkedIn URL is just /nicole—how badass is that???), and a look at the old and new approaches to diversity via an open forum discussion preceded by a talk from Google’s Head of Diversity Markets, Chris Genteel.

The event everyone’s talking about though, is Dan Gilbert’s discussion of fintech in Detroit. Chairman of Detroit-based Quicken Loans, Gilbert has been newsworthy of late due to his involvement with TPG Capital, one of several companies, including AT&T and Verizon, reportedly in a bit of a bidding war over Yahoo!. Gilbert said he “wished he could comment” when asked directly about his attempt/desire to buy the company, then steered the conversation back toward making Detroit the fintech capital of the world (Detroit good, business good, fintech good, Quicken good).

Bike rides, a showcase of Internet of Things devices from big companies, and of course a big bash to close everything out. The final day of the week had everything you could have asked for, and was about as educational as the final day of school always was. They didn’t even have any Lazy Lectures—this was all about hands-on field trips and drink-in-hand farewells.

So, was it all worth it in the end? Is an Engine-Revving Renaissance in store for the Motor City? Let’s just say there are plenty of minds with big ideas and plenty of hands a-tinkering, and that’s certainly not a bad thing for the city and its business prospects. Whether Detroit can continue to capitalize on its current advantages—which are essentially borne from the failures of its past—remains to be seen. The potential – and the desire – is definitely there.