One major issue for me has always been the price; I have never been able to justify +$600 on something that I would use as a toy. Recently though, I had the chance to test out the MOTA Jetjat Ultra Drone—it’s being released on September 24, it only costs $129.99, it’s less than 4 inches wide, it’s supposed to take high res photos and videos, and it’s something my kids could hopefully use as a toy. So I took it for a little spin (literally)…

A Lot Of Power In A Tiny Package

What struck me first was the size of the drone; it’s a nano drone. Even with its “nano” reputation preceding it, it is still remarkable how tiny this thing is. To put it in perspective, it’s smaller than Donald Trump’s hands—at 3.5 x 3.1 inches, it might actually fit in his palms. The drone itself can be stored within the remote control unit; it’s safe, easy cargo, and a breeze for transportation. If you want a drone that you can just toss in a backpack, or a lunchbox for that matter, the JETJAT ULTRA is perfect. 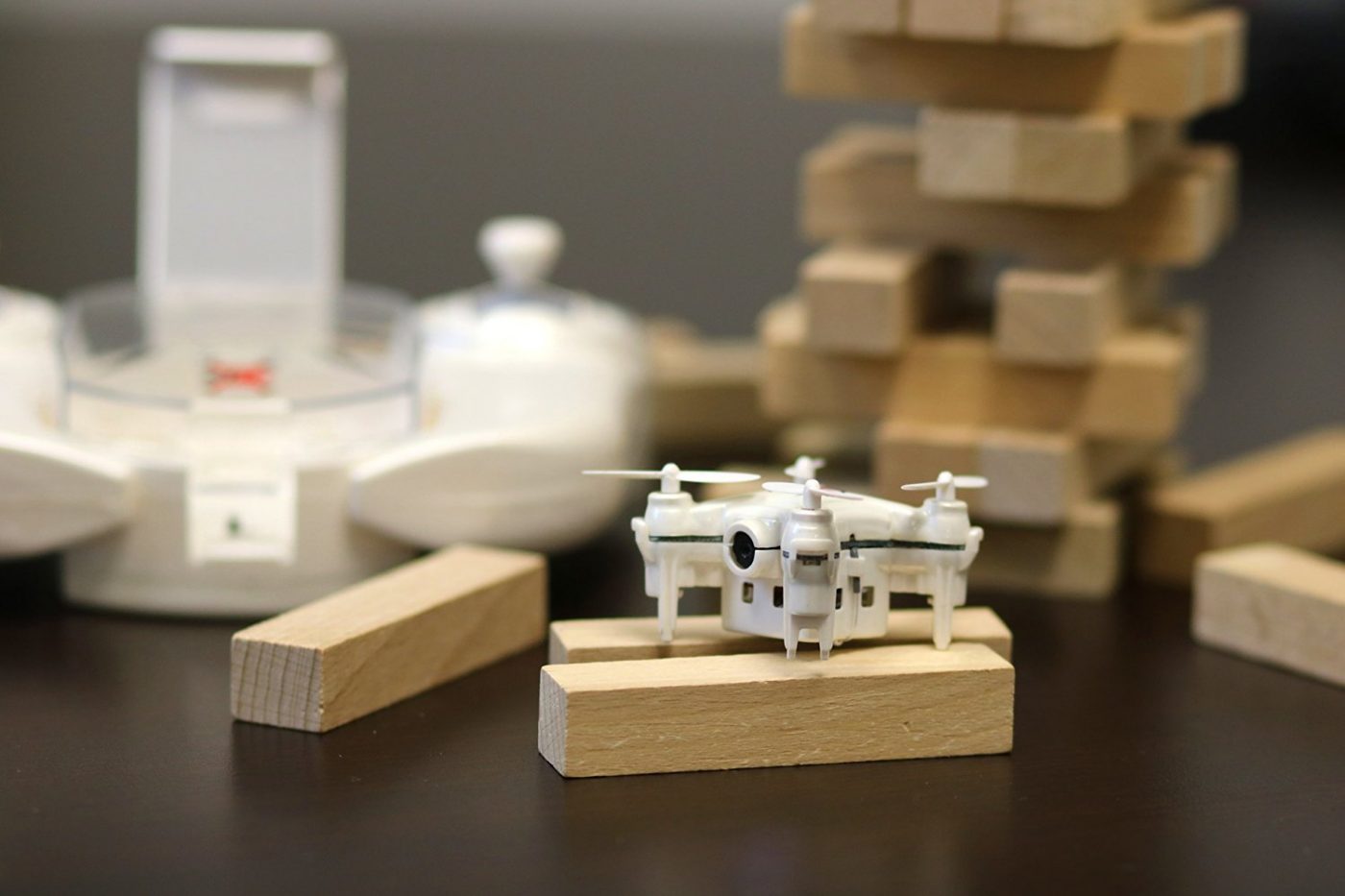 What the drone lacks in size, it more than makes up for in power. When the drone is in the air, it moves really fast. I don’t know the velocity specifics, but what I can say is that it is fast—like, keep-up-with-a-car-going-at-a-decent-clip-and-definitely-faster-than-me fast. The JETJAT can also rise straight up about 75-ish feet, which is certainly enough height for some pretty sweet photo angles.

For being so small, the drone is also surprisingly durable. I crashed it numerous times and only once did one of the blades get slightly bent. The drone also comes with a number of replacement blades in case I did happen to break one (which is a legitimate possibility in the near future).

Getting the drone in the air was very straight forward. Once I had paired the drone with the remote, a single button press launched it into the air. It also has one-click landing, making it easy to safely drop the thing back on the ground. You can also set the drone in your hand, turn it, and then throw it into the air for a hover—a slightly more interactive and enjoyable launch tactic. 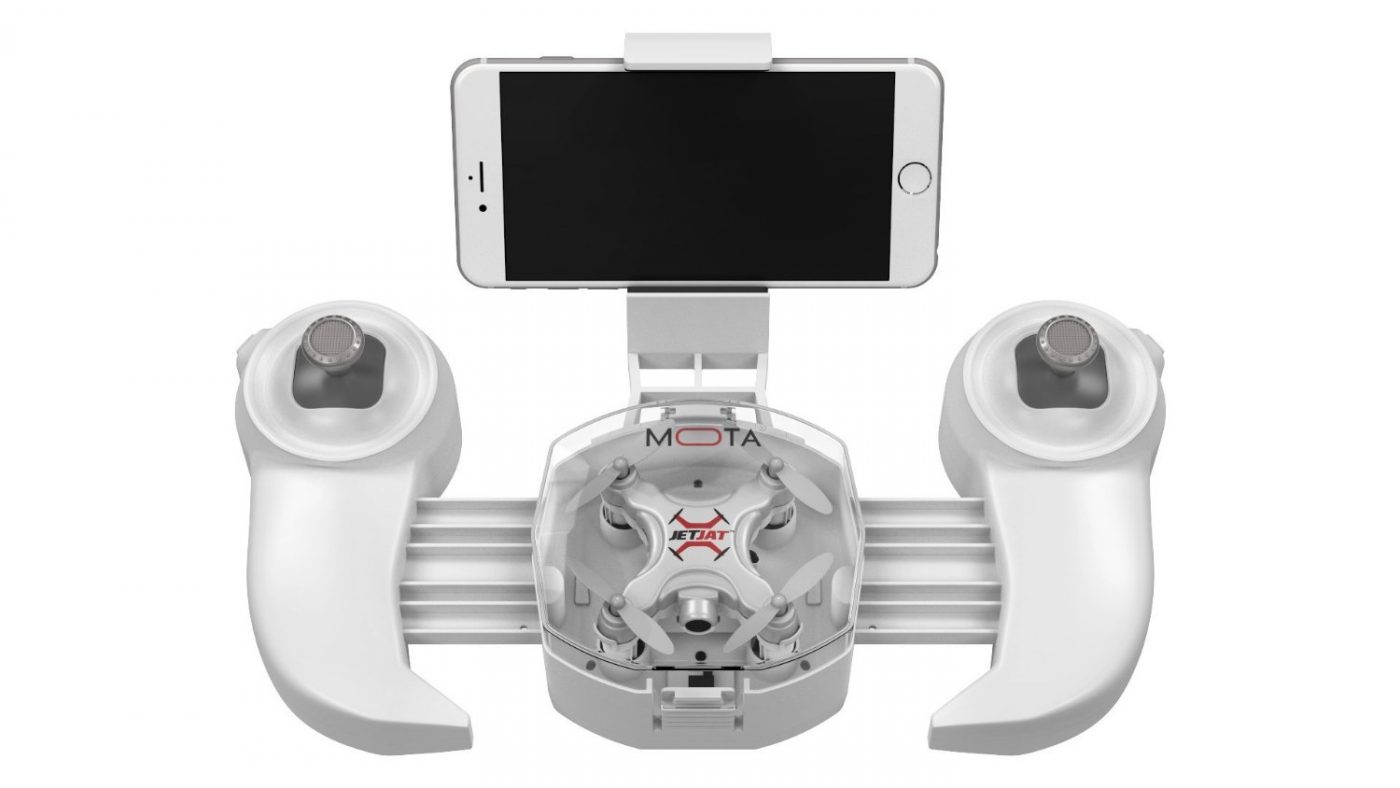 The companion app is relatively simple to use. Through the app, you can control the flight, adjust for any balance issues, increase the propeller speed, and manage the onboard camera. While I didn’t try to control the drone with the app or require adjustment to any flight settings, I did try to take photos and video.

The video always recorded (and was conveniently stored to my smartphone’s video library automatically), but I had some trouble getting the live streaming feed from the drone to display consistently on my iPhone—not sure if it was a user issue or a software issue, but I wasn’t able to get a live camera feed every time I flew the device.

MOTA claims that the drone offers crystal clear video, but because the onboard camera is only 640 x 480 SD, the image does end up a bit grainy. It’s not bad, but it’s certainly not #NatGeo. Additionally, while recording there were several instances where the video feed lost its clarity and became a pixelated jumble. Only temporary issues, but enough to notably disrupt the flying and recording experience.

From a number of reviews I read, I knew that nano drones can be difficult to control, especially for newbies. This was certainly the case for me. The front and back of the drone are distinguished by red and blue lights, but this was never explained in the directions. Until I figured this out, I couldn’t figure out how to keep the drone pointed forward, which resulted in me flailing the ULTRA around like an alien en route to a DUI.

Even after I did learn how to keep the drone pointed forward, the lights are so small that I couldn’t see them once it got more than 10 feet away from me. The only immediate solution I could come up with (having had troubles with the forward-facing video feed) was to walk closely behind the drone so I could keep it aligned correctly. After about 40 minutes, I was able to keep everything in check, even if I couldn’t see the lights.

I briefly attempted to use the motion sensor controls; in this mode, you are just using the smartphone app to guide the flight, and the guidance is dictated by tilting the phone and leveraging the accelerometer. It was pretty cool, but it was such a different experience from the standard controls that I wasn’t able to pick it up comfortably and command the flight confidently. I suspect that if I spent a bit more time honing the touch, I could master it. I couldn’t really tell if it would be a more effective method for navigation.

5 Minutes Of Flying Isn’t Quite Enough

My only big beef with the JETJAT ULTRA is the battery life: it can only fly for 5-7 minutes before needing a 15-20 minute recharge. The short battery life made the entire experience difficult to thoroughly enjoy, let alone take anywhere, especially under the circumstances of “getting the hang of things.” I understand that the size makes it difficult to hold a long charge, and I knew what I was getting into (the 5 minute flight time is no secret). But still, it was deflating and frustrating. I suppose if you just want a quick drone fix while on a smoke break, this could work, but not really for an afternoon of fun or for capturing any extended event footage.

Once I nailed the controls, the MOTA JETJAT ULTRA was extremely fun. I could easily see me and my kids taking it outside and having a good deal of fun with it, and snapping some pretty cool shots. Unfortunately, five minutes of flight time is barely enough time to zip it around the yard a few times, so we may need to bring along a few other toys for the day.

At $129.99, if you’re not a total drone junkie but want a nifty gizmo to help pass the time, you can’t really go wrong—it’s certainly less expensive than the hard core drone hardware out there and it has its appeal. Unfortunately, for me (admittedly a newbie to the space), with the video issues I experienced and the fleeting flight time, the small stumbles felt a little too big to earn a buy.