A few months ago, Title III of the JOBS Act came into full effect. At the time SnapMunk contributor, Daniel A. Guttenberg predicted that, “you can bet we’ll start seeing a trickle of startups backed by regular old Joes in the coming months.” We’re now beginning to see the emergence of a range of equity crowdfunding platforms that make just that possible.

Title III has given startups a way to raise capital by accepting money from ordinary citizens. The provision makes it possible for non-accredited investors (those with less than $1 million in assets / an annual income below $200,000) to invest in startups in exchange for equity. At an operational level, Title III crowdfunding is similar to crowdfunding platforms like Kickstarter, except backers are rewarded with shares rather than a product. Companies are only allowed to raise $1 million using crowdfunded investments, so its use is limited to ventures that are in their early stages or those that might not be seeing much luck with traditional venture capital. 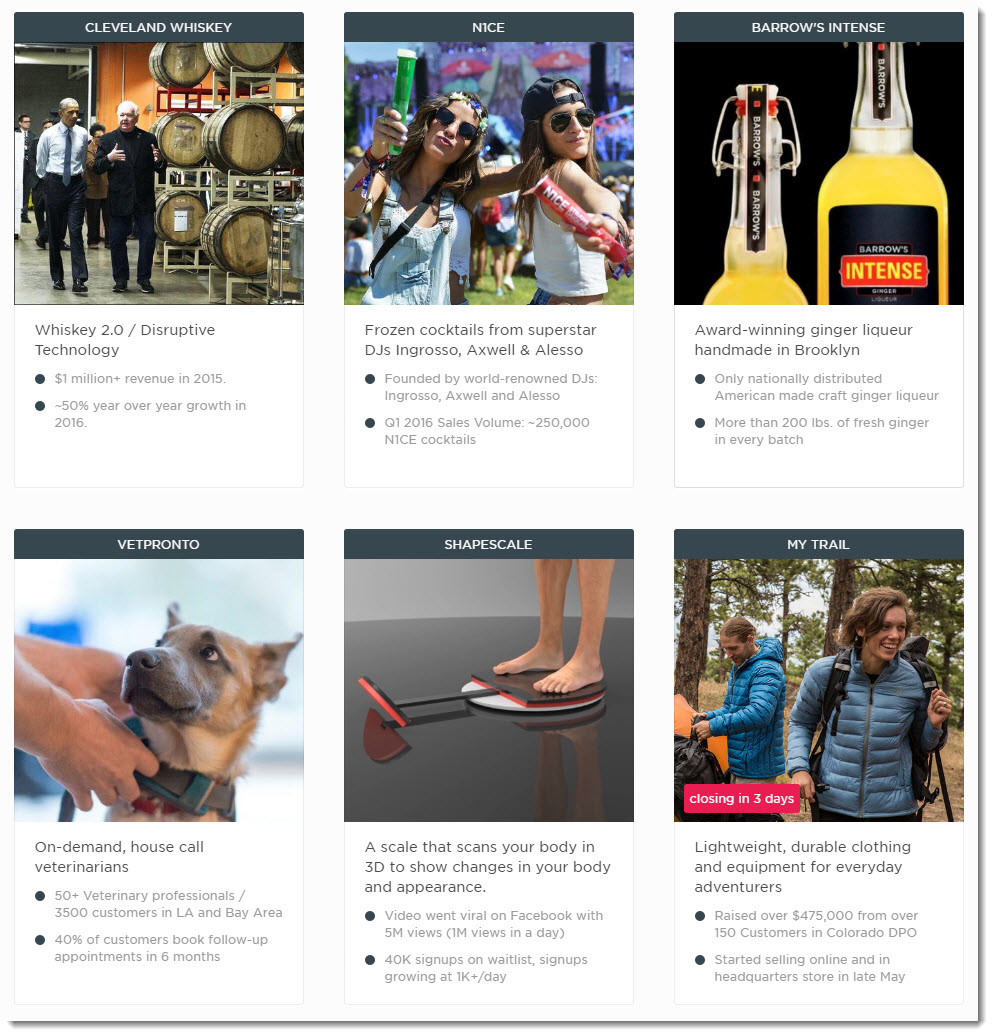 Equity crowdfunders make their money when a company in which they’ve invested either IPOs at a higher price than they paid or gets acquired. Ventures might decide to reward their patrons in other ways, such as profit-sharing programs. There are, of course, risks involved with these kinds of investments; you can read more about them here on Republic’s site.

Equity Crowdfunding: The Platforms & The Players

The novel fundraising method got its biggest boost so far when AngelList—the earliest player in equity crowdfunding—decided to dip its toes into Title III equity crowdfunding (also known as Regulation Crowdfunding). AngelList did so through a spinoff platform called Republic. The service launched in July this year and has four projects raising funds on it right now.

Republic allows anyone above the age of 18 to make investments in companies raising funds using the platform. The amount an individual can invest is computed based on their annual income and net worth. Like with conventional crowdfunding, investments only go through if companies reach their funding goals; patrons’ money is held in an escrow until that happens.

Although the dollar amounts obtained from individual investors tend to be small in the case of regulation crowdfunding, the power of the crowd means that the funds add up quickly. Just ask the owners of The Native, a luxury hostel in Texas that became the first successfully regulation crowdfunded campaign when it raised $396,000 on NextSeed. It was fitting that the first Title III success story came from NextSeed; it was the first Title III crowdfunding platform to get approved.

A number of other platforms have managed to get approval since NextSeed. Services offering regulation crowdfunding opportunities includes WeFunder, SeedInvest, IndieCrowdFunder, truCrowd, StartEngine, CrowdfundingStar, Jumpstart Micro, Crowdboarders, and Kroudfunding. Expect to see many more joining the party. Truly crowdfunded investments are on their way to becoming a dependable way for early stage startups to raise capital while giving their early adopters a chance to experience the sweet taste of being a stakeholder.