As someone who has dealt with both anxiety and depression, I know firsthand that receiving effective mental health care can be extraordinarily frustrating. Finding the most effective medicines can feel like a complete crapshoot, with doctors on a loop saying, “Let’s try this one”, “Now let’s try this one”…

Because mental health care relies so much on patients reporting their symptoms, treatment is often part guesswork, part science, and part hope. The scattershot approach also results in high expenses and much time wasted trying to narrow down optimal treatment.

The often infuriating nature of mental health is what makes Genomind, which just raised $4.5 million in funding, such an interesting company.

Genomind offers genetic testing focusing on neurotransmitter and metabolism pathways – the very things responsible for mental health (or lack thereof). The company’s patented “Genetic Assay” test analyzes 18 well-documented genes which are known to affect psychiatric condition. The testing includes pharmacodynamic genes, which indicate the effect a drug has on the body, and pharmacokinetic genes, which indicate the effect body metabolism has on a particular drug.

According to the Genomind website, the Genetic Assay test…

…identifies patient-specific genetic markers that indicate which treatments are likely to work as intended, have no effect, or cause adverse effects

For example, I currently take an SSRI (Selective Serotonin Reuptake Inhibitor) drug. If I took the Genetic Assay test, it could indicate that, given my genetic makeup, SSRI drugs are actually ineffective and that an alternative drug should be selected.

Doctors administer the test with a simple cheek swab, which is then sent to Genomind for testing. Genomind then sends a report back to the doctor, providing some clarity on how to most effectively treat the patient in question. Genomind offers doctors a complimentary consult for each report in order to ensure they fully understand it. 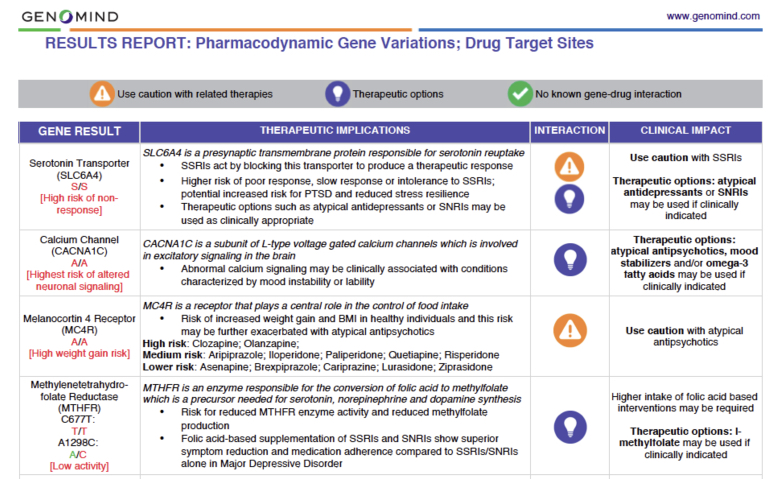 As I reflect on my own frustrations navigating the mental health world, I can only hope that Genomind is a sign of better things to come. A sign of more clarity and faster access to more effective treatment. For those struggling with mental illness, hope is often hard to find – maybe Genomind will help find it for those who need it most.