I never met a meat I didn’t love. Hamburgers, hot dogs, steak, bacon – you name it, I’ll eat it. But it’s hard to find meat that isn’t swamped with antibiotics, pathogens, and even fecal matter. It’s a pretty nasty problem.

Additionally, there are a host of ethical concerns. Were the animals raised in cages or free-range? Were they grass-fed or corn-fed? How many antibiotics were pumped into the animals? The big challenge is to find meat that was harvested in a humane, healthy way.

So what if there was a way to produce meat – real meat – that didn’t involve killing any animals? It may sound like science fiction fantasy, but Memphis Meats is trying to offer that alternative; the startup, which just raised $2 million in funding, is blending cutting edge Silicon Valley technology with time-tested Southern recipes.

Instead of harvesting meat from animals, Memphis Meats grows meat cells in a lab. In other words, they take stem cells from an animal, multiply those cells in petri dishes containing nutrients, and then eventually grow the cells into actual meat that can be eaten.

First, Memphis Meats isolates cow cells that have the ability to regenerate. Then they feed those cells with oxygen, sugar, and minerals. In nine to 21 days, the developed cells – which have spent time in a bioreactor tank growing into skeletal muscle – are harvested.

This isn’t just a theoretical idea that Memphis Meats hopes to implement at some point in the future; they’ve already produced meatballs this way, and all reports indicate that these meatballs taste just as good as traditional ones. The process isn’t cheap though.

Right now, a meatball costs around $40 per gram to produce. That works out to about $1,100 for a one ounce meatball. That’s some seriously pricey meat, coming it at approximately $18,000 per pound.

The startup is confident, however, that over time, the costs will naturally come down to a competitive level as the process becomes more standardized. According to the Memphis Meats CEO, Uma Valeti:

It’s a lab process right now – the first few iPhones cost millions of dollars, but as they moved from the lab to the factory, the price plummeted. Similarly, the price of cultured meat will drop quickly in the lab as the technology advances. And the price will fall off a cliff once we scale up to larger and larger bioreactors, until it’s competitive with conventional meat.

The company was founded by Valeti, who is a cardiologist, Nicholas Genovese, a stem cell biologist, and Will Clem, a tissue engineer whose family owns a string of BBQ restaurants.

Cultured meats have some significant eco-advantages over traditionally harvested meats; the process is much cleaner than that used in most slaughterhouses, and much more environmentally friendly, emitting 90% less greenhouse gases. 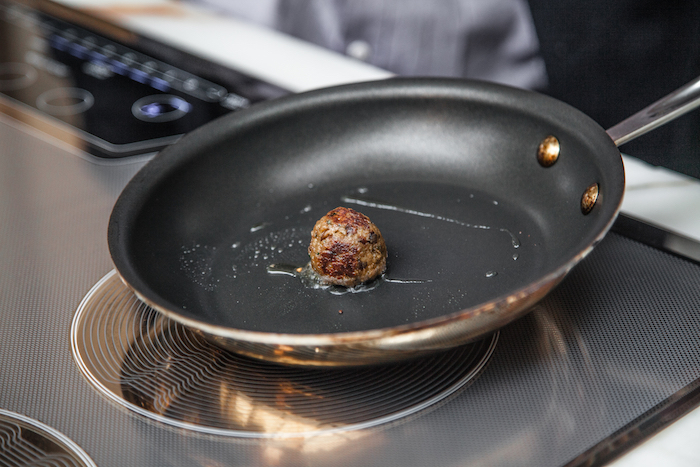 The obvious issue Memphis Meats will have to overcome is cost and perhaps a stigma of eating lab-raised meats. But with an ever-growing demand for healthier, more ethical options, the demand for cultured meats is likely to be high.

Once firing on all cylinders, the company plans to develop a product line of hot dogs, sausages, burgers, and meatballs.