Your company may be a startup or an long established company, but you want to choose the best communication software to keep everyone from developers, sales, and clients on the same page. There are multiple options out there, but one stands above the rest. You want to choose wisely and not have to migrate to new communications software later, so we offer this comparison of the top two.

HipChat really changed the way business project communication was done, using software for startups, as well as established companies. Others followed, leading up to Slack, which has come in like a storm and is washing away the competition, including HipChat.

HipChat vs Slack, which is right for your Company?

In January of 2010, HipChat began offering their HipChat communications software for startups and established companies. It was pretty revolutionary and it allowed users to chat using their browsers on existing Windows, Mac, and Linux clients. Their iOS app came out in March of 2011 and Android followed in June.

This great new communication software for startups and established businesses featured chat rooms, plus one-on-one messaging with searchable chat history, and image sharing. This made communication within the group or company so much more user-friendly. The plus version, which was (and is) still very low cost, allowed you to use HipChat inside your company in spite of firewalls. It integrated with quite a few third-party apps. It was available as a web client, mobile client, and Air app.

Then in August of 2013, Slack was created by 4 guys as an internal communications tool in their company, Tiny Speck. When it was launched, they signed up 8000 customers for free software within 24 hours. Slack offers communications software for startups and established outfits, persistent chat rooms, organized by topic, and also private groups and direct messaging. Slack is searchable by file, conversation, or people. It easily integrates with a large number of third party services like Dropbox, GitHub, and Google Drive.

In addition to apps for iOS, Mac, and Android, it has a Windows client. Slack is available for the Apple Watch, allowing users to make simple replies and send direct messages. It was even the home screen of the promotional video for the Apple Watch.

By February of 2015, Slack was adding their communication software for startups, big companies, and other groups at a rate of about 10,000 active daily users a week with 135,000 using the paid version. In April, it had achieved 750,000 daily users with 200,000 paid subscribers.

See below Comparison Chart for HipChat vs Slack: 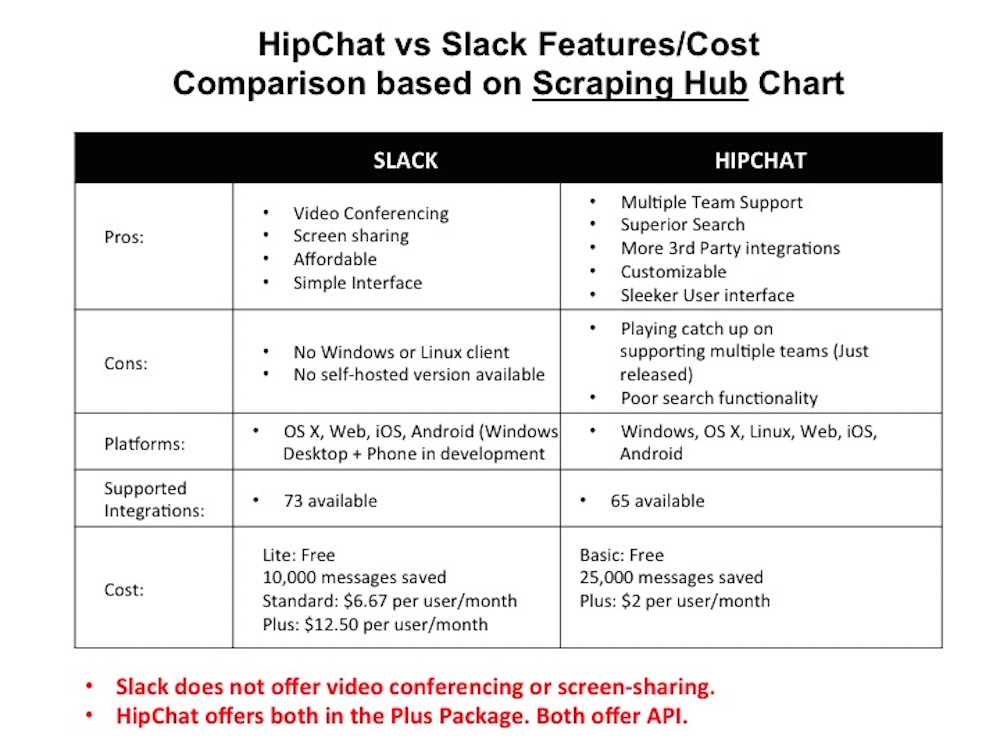 What are Clients Saying about Slack:

NetGuru.co switched from HipChat to Slack to see what all the hype was about. They were so pleased they decided not to go back. They included basic tools integration, simple user list management, OSX app, and support as the main reasons.

They found Slack offered an easy way to manage their user’s list by doing a bulk import instead of individual invitations. Then they added basic integration tools in 30 seconds. They are really happy with the ready-to-use add-ons and the mobile, web, and desktop apps. They imported all the coworkers to the app and were fully operational in 3 days.

One of the things they loved is that Slack allows them to be transparent and have cooperation with all the team members. Developers and other groups can join any project, fostering team success. Slack offers more third party services and integration is easy. They plan to do many more integrations with Slack in 2015 since it speeds up both the development and the management process.

The Scraping Hut says they like the visual interface with avatars shown along with the message and think it is much more vibrant and colorful than HipChat. You get a nice summary of recent mentions and are able to add a star to messages and files. They found migration to Slack was really easy.

Their main comment about the downside of Slack is cost. When buying software for your company, money may be tight, but as they say, “Time is Money,” so Slack is probably still worth it!