Last week was “American Thanksgiving”; the time when everyone in the United States comes together, farts out a few notes of gratitude, watches football, and then against all scientific odds, gets even fatter.

As a Canadian, although I had already had my weekend of Thanks in October, I still felt left out. Watching all of my US friends and colleagues celebrate family, life and luck, I felt obliged, living in my own lucky bubble, to exercise a few more sentiments of appreciation. Given that I have this weekly column as a forum, I thought it might be interesting to combine my aspirations of gratitude with our site’s affinity for innovation and write about modern technologies for which I am most thankful.

This past week, these two in particular did a lot of damage…

Li-Fi is a wireless technology that relays data through light waves, in either the visible or non-visible spectrum (e.g., Infrared). Because visible light is the craziest shit to happen since eyeballs, it has the ability to host data transfers at much higher speeds than Wi-Fi radio bands. How much faster? Tests have shown that Li-Fi can hit 1Gbps – that’s one hundred times faster than standard Wi-Fi.

Let’s make sure that sank in: ONE HUNDRED TIMES FASTER THAN WHATEVER YOU JUST USED TO LOAD THIS ARTICLE WHILE LISTENING TO A JUSTIN BIEBER SONGZA CHANNEL.

Obviously, this is amazing and in the hands of the right people, it will open doors to incredible innovation and utility. Then once members of the general public get access to it, do you know how spoiled and annoying we’re all going to get???

When a website takes more than three seconds to load we act like someone shit on our toothbrush. Can you imagine what kind of insufferable expectations and attitudes we’re going to develop once people can download all 6 seasons of Gossip Girl in less than a minute? Let me tell you: the entire planet is going to turn into one big episode of My Super Sweet 16.

“WHY IS MY PIZZA TAKING SO LONG I DON’T LIKE THINGS THAT STOP WHAT THE FUCK IS A LINEUP HOW COME WE STILL HAVE OLD PEOPLE OMG WHY HASN’T MICHELLE LIKED MY PHOTO YET THAT JEALOUS BITCH!”

It makes me think of the moment when Louis CK went from comedian to legend, sitting next to Conan O’Brien and talking about how everything is amazing and nobody is happy:

For the average techie, perhaps the pinnacle of scientific awe is the physics-bending flair of the Superhero. Next year, a massive superhero blockbuster will be released: Batman v Superman: Dawn of Justice. This week, the official movie trailer was released. This is it below:

First things first: I WILL see this movie, I WILL see it in IMAX-3D-Hologram-Augmented-Virtual-Brain-Fuck-Reality and I WILL have to put the popcorn on the seat next to me because I WILL have an erection the entire time I watch it. This will be a mind-blowing work of film & technology.

Now that we’ve covered that; I know it’s “fantasy”, but for the love of mercy, can we please stop pretending like some rich ninja dressed in a fucking snow-tire has any chance of ever beating up Superman?

Again, I know it’s the realm of fantasy, but within its own borders it has to make some rational sense. This is exactly the kind of frustration through which I go when I try to watch an entire Lord of the Rings movie without burning myself alive; how does anything other than another wizard ever make Gandalf break a sweat?

I swear there’s a scene in one of the LOTR movies where Gandalf actually starts hitting people with his “staff”, which at that point might as well be a lamp from West Elm. YOU’RE A WIZARD, DUDE – ABRACADIZZLE THE OGRES INTO A BOWL OF PRETZELS AND CRACK A BEER.

Let’s compare the ammunition of Bruce Wayne vs Clark Kent: 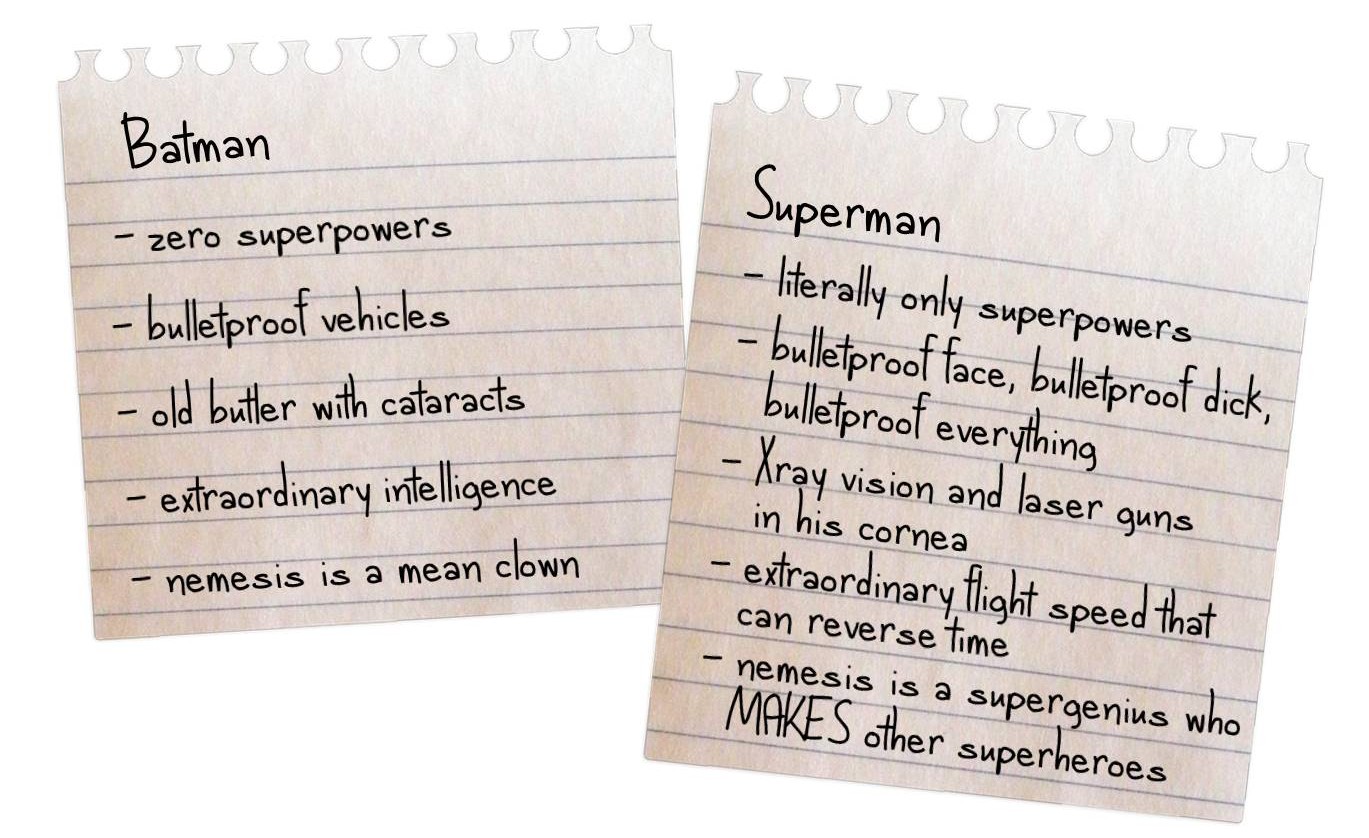 Anyone with even the slightest background in tech would tell you that this is like bringing an SQL to a Mongo fight; it’s like a Motorola Razr going up against a Nexus 6; it’s like some rubber-tit goth with the prefix, “Bat” going toe to toe with an intergalactic hunk with the prefix, “Super”. Unless the ‘v’ in that movie title stands for “Venerates”, what’s even more mind-blowing than the graphics is the fact that anyone would consider this a match-up rather than a beat-down.

So all this is to say, very simply: thank you. Thank you, world and thank you, technology.

These are just two small examples of the ongoing marvels supplied by this planet in what seems like an effortless exercise in “business as usual”. I live in a time where having my mind blown has somehow become an inescapable part of my daily routine. For that, I am nothing but grateful. Long after October in Canada.