–Warning: This piece is NOT satire. Just giving you the heads up.–

In the early 20th Century, there lived a man named Abraham Maslow. You may know him as Super Mario’s grandfather… 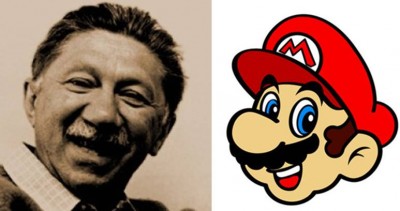 Or, you may know him by his work in the field of psychology.

In 1943, Maslow proposed a theory now famously known as Maslow’s Hierarchy of Needs (fully published in 1954). The model was an attempt to synthesize a great deal of research surrounding human motivation; the goal was to illustrate, at a high but profound level, what it is that humans most commonly strive to attain, why they strive to attain it, and how they go about the attainment. The model reflects both conscious and unconscious decision-making, as well as both internally and externally sourced motivations.

While never adopted as cold, hard fact, Maslow’s Hierarchy set the standard for psychological analysis of human needs and is arguably the most widely cited and leveraged motivational model, all the way from business management to therapy and parenting.

Here is a sample diagram of the famous model in its original design, with five tiers: 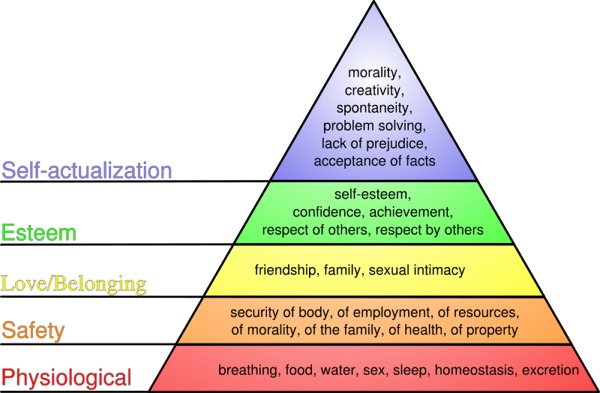 Later, through revisions published in 1971 and 1998, Maslow updated the hierarchy to include three new tiers that reflect our desires to experience symmetry and beauty, attain knowledge and enlightenment, and rise above our own selves to help others achieve their potential: 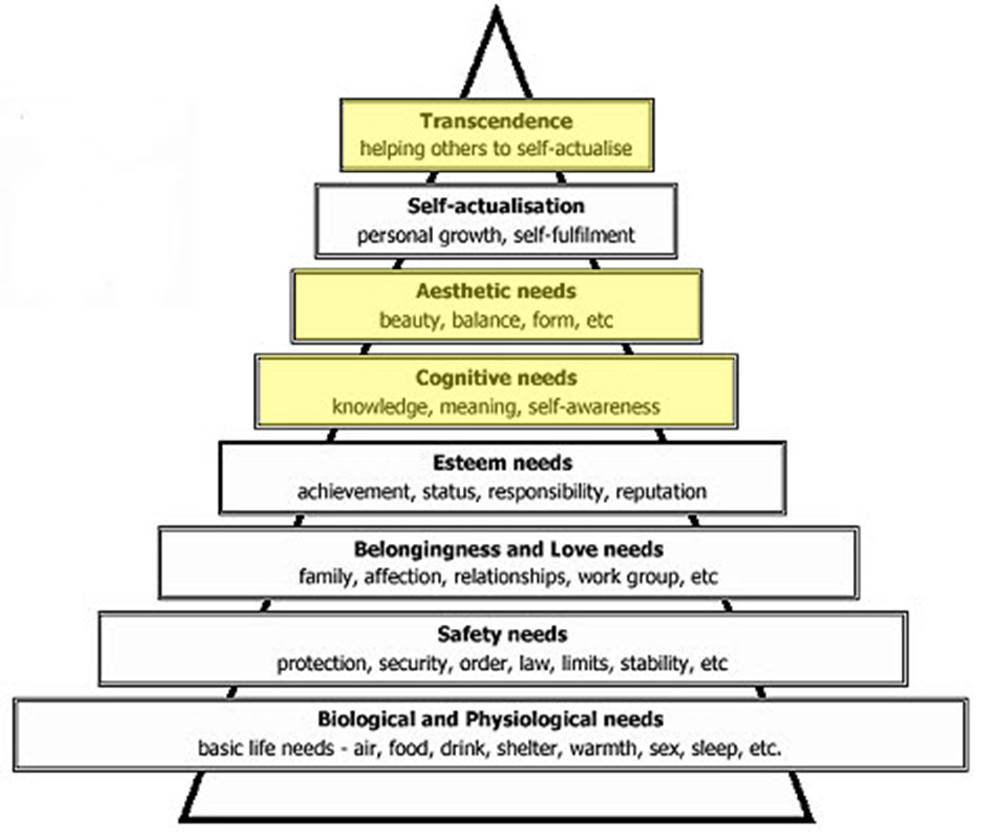 There are two key reasons why Abraham Maslow structured his model as a hierarchy. First, he believed that a person’s journey to Transcendence was in fact sequential and dependency-based; one does not acknowledge true fulfillment of a given tier unless one has achieved true fulfillment in the tier(s) below it.  For example, if you are yet to fully engage with or complete a pursuit of “cognitive” achievements, it is likely that you are short on “Esteem” – likely because your status or reputation is weak, either through personal or public perception. Without feeling “Safe”, you cannot adequately absorb “Love” and affection, and so on.

Second – and this is very much my own prioritization – the hierarchical structure naturally lends itself to a broader life goal of maximizing what Maslow called, “Peak Experiences”; the higher up you get in the hierarchy, the more deeply satisfying events and discoveries you’ll encounter. 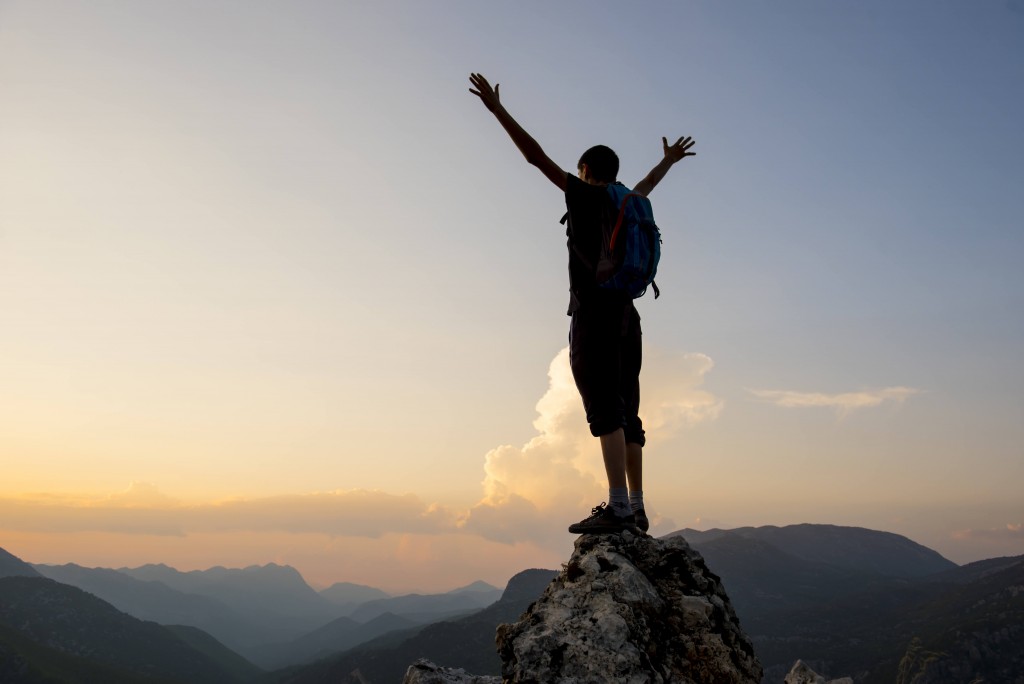 By no means is Maslow’s model undisputed. There are plenty of scholars and professionals who have challenged its accuracy and completeness. Objections have been made about the omission of personality dimensions (e.g., Introverts vs. Extroverts) – Maslow himself even acknowledged the significance of this omission. People have suggested that his hierarchy is missing critical levels of need, like autonomy and acquisition of objects, while many have challenged the format of a hierarchy all together.

I too think Maslow’s Hierarchy is imperfect but not in its structure, its philosophy or its utility. I think it is now missing generational perspective. I believe a critical revision to make is one that helps us better understand and more accurately reflect the most common needs, priorities, perceptions and behaviors of a generation that now makes up the majority of North America’s workforce, and a generation whose embedded context of connectivity changes almost everything…

After years of hearing, watching, studying, dating, working with and reading about them – not to mention over 30 years of being one – here is what I believe to be The Millennials’ Hierarchy of Needs: 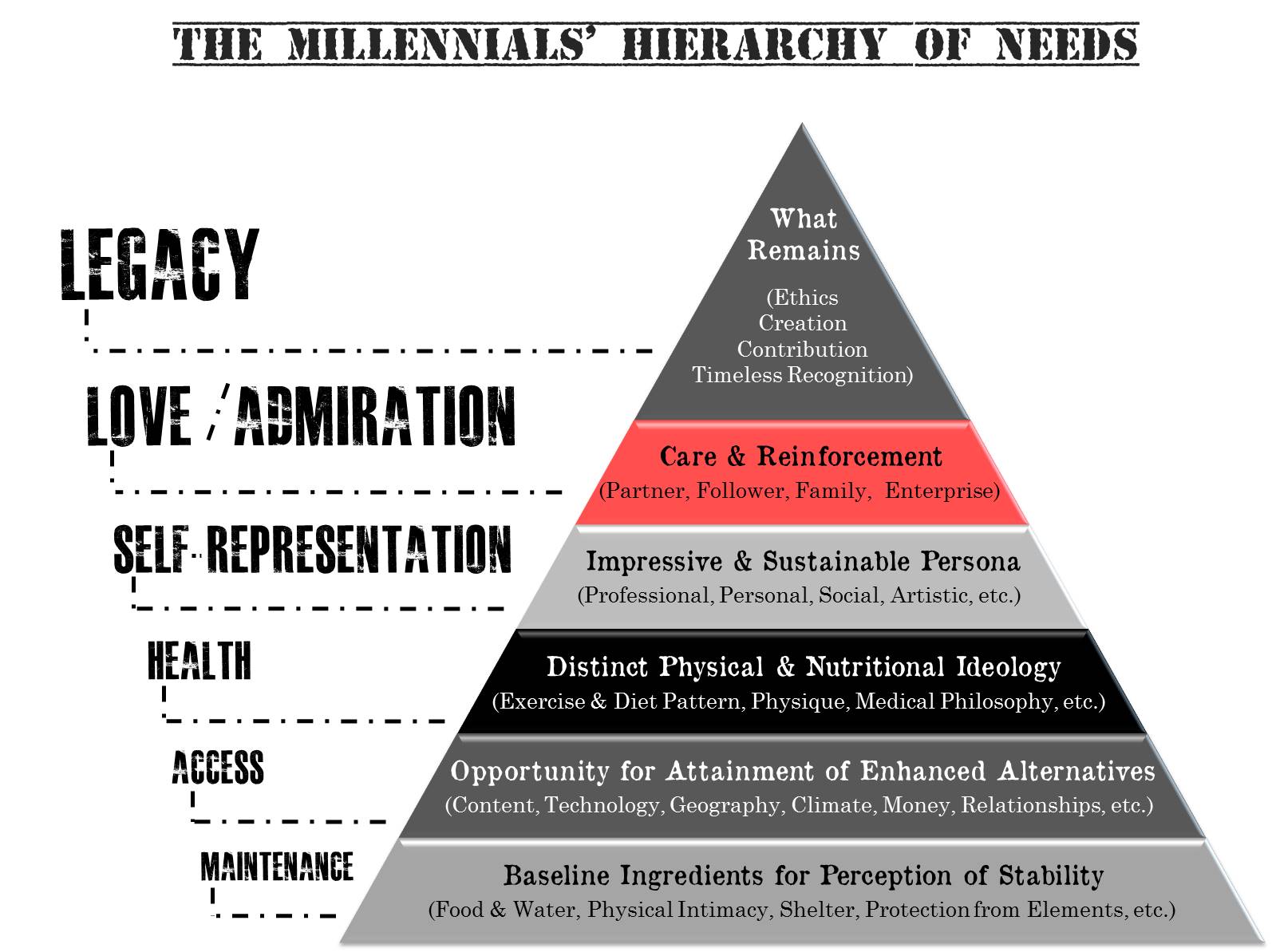 Here is a side-by-side view of Maslow’s vs The Millennial’s:

It is important to acknowledge the importance all three key structural elements; vocabulary, grouping and order. They are all relevant in projecting the common mentality of the North American Millennial. And while I do believe that in adulthood it is common for someone to be constantly tackling all tiers of the hierarchy at the same time, I do strongly suggest that a (initially) subconscious prioritization and natural chronology exists between the tiers.

Maslow’s original model breaks apart the concepts of Physiological needs and Safety needs. In the resting mind of the North American Millennial, I do not believe that distinction exists to any significant degree – especially as it pertains to the concept of a progressive hierarchy. Given the context of the generation’s upbringing – the cultures, standards, attitudes and industries with which they have been surrounded – there is usually a layer that simply represents the largely subconscious question of, “On a daily basis, do I feel like my surroundings and I are stable enough for me to accomplish something more than ‘barely squeaking by’?”

This encompasses basic nourishment, safety from inescapable violence and yes, sex / humping – or some form of positive physical engagement. Once these types of Maintenance needs have been met at a critical mass (to the individual), the opportunity to comfortably seek fulfillment at the next level is enabled…

This tier is the first major departure from Maslow and most of the existing models, though you will find sketches around the internet with “Wi-Fi” depicted at the very base of the classic hierarchy. Those depictions are meant to be a joke (sort of) – this one is not. One of the very first things that will cripple a North American Millennial is the feeling that they are cut off from the rest of the world and the new opportunities it has to offer.

This overwhelming need can be found in any number of generational trends-turned-fixtures; extreme glorification of “Wanderlust”, exaggerated entitlement to free Wi-Fi, expectations of free detailed education (e.g., Wikipedia) and increased dependence on impersonal “networks” (e.g., Reviews) to name just a few.

This encompasses information, money, interactions with people and of course, technology. To be clear though, it is not necessarily the acquisition of these items that is critical, but more fundamentally the perception that one is in a position to eventually acquire them. This is not blind hope; this is very tangible access. Once these types of Access needs have been met at a critical mass (to the individual), the opportunity to comfortably seek fulfillment at the next level is enabled…

This is not the state of being healthy or being sick. This is the development, definition and acceptance of one’s own attitude towards the topic of health and the merits of their physical stature. North American Millennials have been engulfed in a health revolution of immeasurable proportions.

They have been riding shotgun for the mainstream explosion of organics, consequential debates over vaccines and GMOs, taxes on sugary drinks, empowered hipsters birthing litters of “farm-to-table” restaurants and “cold-pressed juice” bars, and 24 year old illiterate gym-rats getting paid hundreds of thousands of dollars to take photos of their squats. Few Millennials in North America are outside the blast radius of the health movement, to some degree or another.

As a result, health is no longer just a state, but an intrinsic human trait that demands a personal ideology to support the core of one’s ultimate self-comfort in appearances, opportunities and relationship with mortality. The ideology could be one rooted in indifference or it could be one rooted in obsession. Either way, it is now an ideology that must be established. Once these types of Health needs have been met at a critical mass (to the individual), the opportunity to comfortably seek fulfillment at the next level is enabled…

To put it in Millennial terms, this what happens when, successfully, “You do you” and “I do me”. This need represents the perceived necessity to establish a unique, distinct persona that satisfies perceptions of social and commercial “value” and with which one is confident and open (if not excited) to share with others. To draw a parallel to Maslow’s hierarchy, this encompasses both Esteem and Self-Actualization. This is the cultivation and the establishment of the ego. This is the launch of the phenomenon that is the Personal Brand.

Once these types of Self-Representation needs have been met at a critical mass (to the individual), the opportunity to comfortably seek fulfillment at the next level is enabled…

This tier represents another significant departure from most existing models in one major way; it’s a lot higher up than usual. In other words, it’s not as close to the foundation. It’s not that Millennials are more robotic and less affectionate than other generations – it’s that with all the personal opportunities they crave, and all the “distractions” they have available, the desire to find and the capacity to facilitate substantial love has drifted deeper into the personal growth timeline. It has also become much more easily replaced with crowdsourced affection.

An important thing to also remember is the significance of this tier’s position in the hierarchy; more so than ever, the Millennial generation is prone to forfeit personal romance if it too gravely challenges their appetite for self-representation, access and health. It is also distinct from family.

You can see the shift in these needs playing out in stats like marriage rate decreases in the 18-34 age range and US births per women aged 15-44. You can also see it playing out in entrepreneurial surges, academic and professional ambitions and social media obsessions. The need for love has not disappeared; it has simply altered in its nature and in its subconscious chronology. Once these types of Love & Admiration needs have been met at a critical mass (to the individual), the opportunity to comfortably seek fulfillment at the next and final level is enabled… 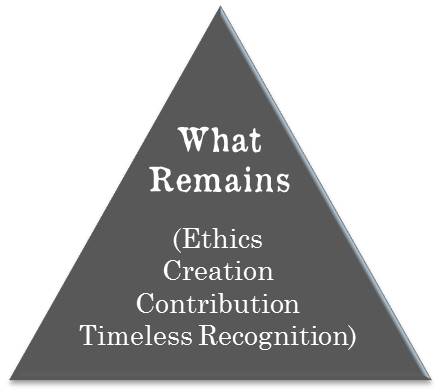 As a result of the contextual cocktail of technologies, for the first time a generation has grown up believing – and rightfully so – that some things do last forever. The glory of permanence is no longer contained to fields of innovation and practice like medicine, or fields of art and entertainment like film; it is available to everyone. That makes it a greater source of both seduction and anxiety. The desire of the Millennial to make a unique, lasting mark is profoundly powerful and I believe represents the peak of their psychological needs, as well as the final stop in their journey of personal growth and accomplishment.

Their Legacy can take the form of digital content, charitable donation, professional influence, social idolization, recognized innovation or of course, even children and family. As the hierarchy suggests, I believe that this tier is only truly embraced and perceived as fulfilled after all the other needs have been met to their critical levels of personal satisfaction.

Then once the Legacy is established, well, then they can actually just Netflix and chill.

In the coming weeks I plan to discuss this theory as it pertains to the Millennial’s Professional Hierarchy of needs. Stay tuned…