According to a study I conducted last year by just living, Apple fans are the most annoying people in the universe, comfortably beating out the second place, Klingons, and the third place, Children Who Sing Gibberish On Public Transportation. At first, all I had to corroborate my data was a high blood pressure and a criminal defense lawyer who was apparently “not getting paid to keep my secrets.” The process wasn’t entirely scientific, so as convincing as the results felt, there was still room for uncertainty. Now, there is no longer room for uncertainty. Now, we have this fucking candle.

A company called, Twelve South (clearly a reference to Hell) makes Apple accessories. As their website will tell you, “We’re not just Mac friendly. We’re Apple only.” So what do you do when you’re “Apple only” and you run out of ideas for actual Apple accessories like sloped tablet rests, bass boosters and something called a PlugBug? You make a candle that smells like a brand new Mac, so that, as The Next Web puts it, your place can, “…smell like an unboxing.” Which, by the way, is nothing new if you’ve ever lived in a Frat house.

The Mac scented candles are made of 100% Soy Wax, can burn for between 45-55 hours straight, and are selling for $24 a pop. Obviously, the first batch sold out within hours and the company is offering people notification of when the next batch is available.

As much as I do like the prospect of a distinctly Mac smell coming from my fireplace, this is just as annoying as it is brilliant (and it is astonishingly brilliant). Leave it to Apple puppets to convince themselves that the scent of a freshly unboxed Apple product is so profoundly different from the smell of a sparkly new Toshiba or a Saran-wrapped VCR that they want it seeping into the fabric of their beige couch and officiously sprawling through their homes like an expensive fart.

I love the smell of new books; whenever I get a new book, I stuff my face in its pages and inhale like I was auditioning for a Rosh Hashanah remake of Scarface. I feel the same way about baseball gloves, paint cans and cute dog bellies. But do I exclusively assign my infatuation to Penguin Classics, Nokonas, Benjamin Moore and Golden Retrievers (the iPads of the canine community), and then try to immerse myself in those scents while conducting my daily adult business at home? No, I don’t. I don’t because I’m not ridiculous. 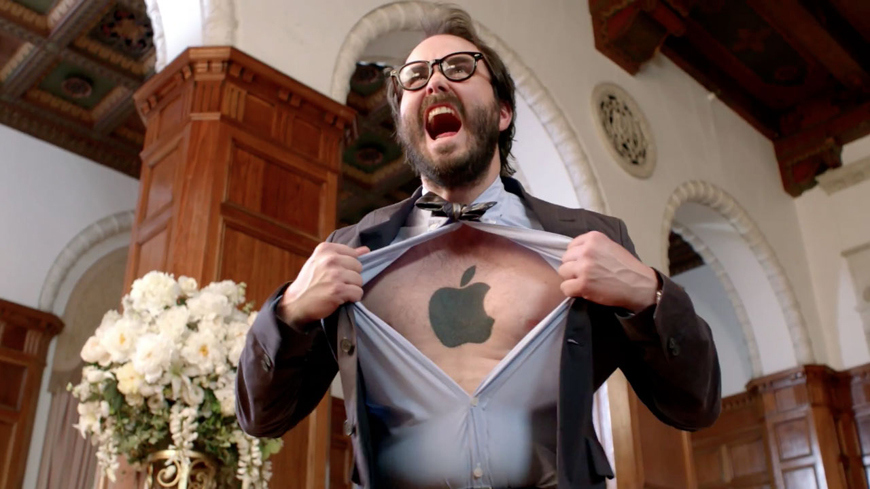 Wanna know how I know this is ridiculous and almost entirely exclusive to the world of Mac-myopia? Because someone did this with perfume four years ago! A group of artists based in Melbourne got Air Aroma, a “scent marketing” company (don’t ask), to create a unique fragrance for an upcoming contemporary art exhibit. The artists wanted the room to smell like “…the scent of an Apple product being opened for the first time.”

How much do you want to bet that with the next batch, they remove the wick?