On many occasions, after meeting successful, well-connected professionals, I have arranged meetings with them in an effort to advance my own personal initiatives. I think people with a hard-on for diplomacy call that, “Networking”.

While my ultimate goal was money or access to people with money, timing was often such that my immediate goal was collecting relevant, actionable advice easily converted into tactical moves that were likely to increase my odds of acquiring cash.

It turns out that 5 nines really is the gold standard; in 99.999% of those “meetings”, I received no such advice.

What I got was platitudes, self-indulgent philosophy, autobiographical blather fit for an incontinent pensioner, and a week’s supply of bullshit to spoon out of my ears while I repeatedly scribbled “no wonder aliens hate us so much in movies” in my day planner.

I took a vow to never shower such nauseating excrement over any of my friends, colleagues or readers. In fact, I vowed to impart, where I was able, only the opposite: bullshit-free perspective, insight and advice.

I never said it would be my advice.

There are tons of straight-shooting, intellectual monster-trucks out there who have not only braved the startup terrain, but successfully muscled through its many different territories. I went out and got two of ‘em for you.

Last week in Part 1 of this mini-series you heard from Tim Wootton. Tim is the founder of the shared parking service and mobile application, Rover. Having just launched on iTunes this past July, Tim was my startup “Freshman”. 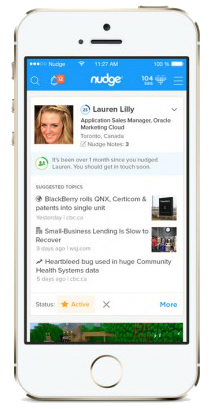 Today, you’ll be reading the seasoned insights of Steve Woods. He is my startup “Graduate”.

In 1999, Steve co-founded a marketing automation platform called Eloqua. For 13 years, Steve drove tremendous growth for the business while acting as CTO. In 2012, Eloqua went public and only four months after its IPO, sold to Oracle for $957 million.

Now Steve is back at it again. His new company is Nudge. Nudge is a social selling application that helps professionals leverage existing connections to grow the right relationships in the right ways at the right times, building stronger, more valuable networks.

With a new startup on his plate and an old one under his belt, here is what Steve has to say…

What was the most important factor in securing the resources necessary to convert your idea into a product? Be it money from investors (at any round), employees, or both…

You are always selling. Whether it’s the next employee, the next investor, the next customer, or the next feature, you are always selling the vision of why that person should care about the mission you are on. If you are not passionate enough about what you’re doing to get everyone around you excited about it all the time, perhaps you shouldn’t be doing it.

It’s not glamorous. It’s an incredible amount of work.  It becomes your life. If you think that you’ll “work smarter not harder”, you are likely going to fail. You are up against a challenge that requires you to work harder than you ever have before, and at an extremely high level of creative intelligence every single day.

What’s the most important KIND OF PERSON to have on your team when you’re trying to get things off the ground? Let’s say it’s a draft, and you have the number 1 pick…who / what kind of resource do you take?

Someone who is extremely driven to be a phenomenal success themselves and who sees how joining your startup is a crucial part of that arc. That is usually a far more interesting person to have on your team than someone who has “done it before” and lacks the energy and passion to wake up every day thinking about how to do it better than anyone else.

What was your least favorite part of launching your product/service? What sucked the most?

Allowing people to make obvious mistakes. It’s how people learn and grow, and at times they have to live through the disaster to see the other side clearly. It’s very hard to sit back and let them create a train-wreck in a way you’ve already done previously, just in order to get themselves up to speed. It feels like there is never enough time for that.

A good idea with good timing and a live product with some users is great. But in order to make the leap from “some users” to “all the users”, what is critical to do / understand / have in place? What is the key to enabling significant growth?

Beginner’s mind – to steal a phrase from Zen Buddhism.  After you have a good set of users, and a decent size team around you, almost every data point you start getting on your product is from people who understand it deeply. This pulls you far away from the next set of users who are more mainstream and are new to your product. What they need is usually the exact opposite of what a deeply entrenched user needs, and you can pull yourself way too far in the wrong direction. It takes tremendous effort to get outside of this circle of influence.

In order to really make it big, what would you estimate is the split between “pursuing your vision” and “just giving people what they ask for”?

It’s why “luck” and “timing” are massive factors in success. There are a million factors that you cannot control and that govern whether the reality you create is interesting enough to people at that particular moment in time.

Once you’ve beaten the Beta phase and your product/service is out in the market, what will kill it the fastest? What can you simply NOT let happen once it’s out in the wild?

It’s a mistake to look at adoption curves and ask about the product in isolation. If you want the ultimate example, look at gaming; it seemed like every person on the planet used to play Angry Birds. Now it seems like nobody does. Did the product get worse? No. The reality of users changed. Business products are the same. It’s not about the product; it’s about the reality of the users. Are you doing something for them that they cannot live without?  If so, you’ll be fine. If not you should be worried.

What’s one thing you regret doing or not doing? If you could do it over again with ONE correction, what would it be?

This seems to imply that by fixing a “mistake” I could make a better outcome. That’s a bold assumption.

So many things that looked wrong or completely wasted have ended up having an unexpected positive effect somewhere else.

As one example, we’d regularly get objections or suggestions on sales calls. And they were objections and suggestions that we had already made in the past, and because of them, screwed up the product. But as a result, I was able to spin those experiences into funny, self-deprecating anecdotes that not only diffused the objections without seeming dismissive to the prospect, but established a great amount of credibility and trustworthiness. Would eliminating the “mistakes” in the product have a net negative or net positive effect? Impossible to say.

Success is more “return on luck” than causality. Show up, push hard in the right direction, react to both good and bad luck in the best and most creative way you can. Good things happen, but you won’t often be able to say, with certainty, “I did X and therefore Y happened”.

Speak to the importance of MARKETING in positioning your product as the “must use” or “the best option”, as opposed to the idealistic reliance on a pure meritocracy.

Are you defining “Marketing” as “things done by people called marketers” or as “things done to ensure the right people hear and believe the right message”? That’s one of the most dangerous splits in responsibility within any organization today.

Today, the vast majority of influence on opinion formation comes from peers.  Ads, content, promotions, etc, can do very little at great expense.

However, to address your snarky point on “idealistic reliance on a pure meritocracy”, no, the best product does not always win. The product that wins is the one that compels people to tell other people how amazing it is. That requires a good knowledge of what creates a story, what creates an “aha” moment, what give someone an endorphin rush, but it’s manifested in the product itself, NOT in a creative brochure abstractly describing a mediocre product.

Today’s best marketers are product designers and developers who have an instinct for such moments but have the tools to make the actual product experience deliver them.

How do you know when to quit?

When you’ve run out of cash and the landlord has locked the doors.