Their lofty approach is often as intolerable as their “bold” dress socks and their advice is usually reminiscent of a rambling, conceited professor, or a concussed hockey player spitting clichés between gaps in his teeth during a first intermission interview.

“You know, you just gotta take it one period at a time. Everyone’s got a job to do. I’m just gonna give it everything I have out there because that’s what the team expects from me, and hopefully, if I can get us some wins and score a few goals, everyone will kinda forget about that whole sexual assaulty thing I did.”

I want to cut the bullshit. Perspective is actually quite helpful and inspiring if it’s delivered in the right way by the right people.

So I grabbed two of the right people; smart, honest, successful, and most importantly, down-to-earth tech entrepreneurs.

I also made sure I got one from each end of the start-up spectrum; a “freshman” and a “graduate”.

Steve Woods co-founded Eloqua in 1999. Out of a cramped office with only a few bodies from Queen’s University, the company started as a straight-forward but intelligently designed B2B marketing platform that helped hi-tech companies with product demand generation and calculated lead management .

By 2010, it had evolved into the industry-leading, if not industry-defining marketing automation and sales intelligence platform. Eloqua set the standard for concepts like “Lead Scoring” and “Digital Body Language”, the latter being the title of Steve’s first book.

In 2012 Eloqua comfortably hopped onto the Nasdaq with an IPO that valued them at about $368 million. Shortly after the IPO, they were purchased by Oracle for $957 million.

Steve is our Startup Graduate. We’ll be getting some of his no-bullshit veteran perspective in next week’s installment.

Tim is our Startup Freshman. 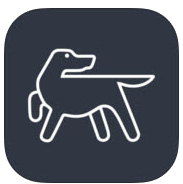 Rover is a shared parking service based in Toronto. The application facilitates connections and transactions between people in need of parking spots and people in possession of private ones not currently in use. While the app drives major cost and time savings at the individual user levels, it also has broader ambitions for major gains at the social (charity) and ecological (pollution) levels and ties in heavily with Smart City Initiatives.

If you have ever driven around downtown Toronto and have read my first article in this Codeless Conduct Series, you’ll have a good sense of how much I appreciate what Tim is doing; he is truly trying to “fix a Fuck This”.

After building his purebred team, working like a dog, pounding the pavements and pissing on hydrants for months, Tim finally has Rover alive and barking, and with no shortage of bite. #HowMuchPunWasThat?? #PunWithinAPun

Reflecting on the experience so far, here are some of his thoughts and suggestions:

What was the most important factor in securing the resources necessary to convert your idea into a product? Be it money from investors, employees, or both…

Rover is an app that’s essentially AirBnB for parking. So for my startup the only resources I needed at the beginning was my time, commitment and about $15,000 to build a product that was far from perfect. The beauty of apps is that you can test a concept quickly with limited dollars. The most important factor is actually executing and committing to development.

If you are going to start something quit talking about it over beers, quit setting up meeting after meeting philosophizing about the merits, and please don’t write an elaborate business plan. Just get out there, talk to potential users, get real feedback. Then just give it a shot! Building the technology is easy compared to getting adoption, and adoption is what you bring to investors to get them excited.

That everything must be scalable! This word can truly hurt you when you are first getting started. It is certainly important that the market opportunity is big enough, and that there are strategies in mind to capture that market. However to “start up”, which is what we are talking about, you do not need to be scalable. You need to prove that you can make the product work and that you are actually solving a problem that people want solved before even thinking about scaling.

The problem with the word “scalable” is that once you start saying it you start believing that everything must be scalable; every marketing initiative, every sales initiative and every technology decision you ever make. That’s bullshit when you’re starting out. First prove that people will pay for whatever you are selling, then worry about scaling.

How do you know when to quit?

I don’t just mean investors. These days, a lot of people love the idea of starting their own company, so when they see you doing it, their reflex is often to congratulate you. Usually though, that’s not their sentiment about the actual idea but more about the fact that you had to balls to try.

When you ask people if they like it and they say yes, keep asking WHY. Do it 3 or 4 times and see what the answers look like. If they can’t come up with a compelling reason why they like it, chances are they won’t use it. That means you either need to stop or you need to change direction.

What’s the most important KIND OF PERSON to have on your team when you’re trying to get things off the ground? Let’s say it’s a sort of sports draft, and you have the #1 pick. Who / what kind of resource do you take?

You need straight up hustlers and doers. The people you need on your team need to understand that execution, no matter how small the initiative, is the most important thing. Again keep in mind here that the goal when you first start-up is to prove you are solving a problem; funding and growth comes after this.

For Rover, our number one priority is getting parking spots. The people I am looking for are people willing to come up with their own ideas on how to do that, and just do it! There is no time to sit around a boardroom discussing the best way to get spots, because it’s all assumptions. We need 2500 parking spots in Toronto by December and we are a team of 5. Our mandate – outside of the bigger initiatives like partnerships, ad campaigns and events – is to each find 100 spots a month. The person I draft is the one who will just find a way to get those 100 spots.

What was your least favorite part of launching Rover? What sucked the most?

A lot of the fun behind developing an apps is coming up with great features, cool features, exciting features. The reality is that when we were starting up we didn’t really have the luxury of doing this. I needed to concentrate on the core concept; the problem we’re actually solving.

Getting distracted by cool features is only going to increase cost, timelines and confusion. Trust me, I learned this the hard way. That’s why it was my least favourite part. I had to back-burner some of the most interesting ideas I had. You need to be nimble and agile. You need to identify and set aside the “cool” stuff that will help down the road but will simply distract you during start-up. Easier said than done though.

A good idea with good timing and a live product with users is great. But in order to make the leap from “some users” to “all the users”, what is critical to do / understand / have in place? What is the key to enabling significant growth?

Understanding exactly what your users are doing in the app.

There is something to be said for reaching out directly to people who have used your service; I have sat down for coffee with many of our users to better understand their experience since data can never give you the entire picture.

However, at the end of the day, data gives you the best picture .

Google Analytics has been my saviour. It’s free and it comes out with new important features every day. My favourite is cohort analysis.

Once you understand where your user drop-off is coming from, which demographics are your super users, which areas (for parking in my case) work better, you are able to target your media spend in a more educated matter. For funding you are also able to show what you have tried that works, what doesn’t, and exactly what you will do with the funding to hit the milestones you have in place.

Once you’ve beaten the Beta phase and your product/service is out in the market, what will kill it the fastest? What can you simply NOT let happen once it’s out in the wild?

Never stop paying attention to your original customers – your early adopters. They were the ones willing to give you a chance and the ones spreading the word through their social networks. It is much easier and cheaper to retain a user then to get a new one. Rover is a service that can be used 365. We don’t want people using it once or twice; we want people using it every day. When we get a download, we try to concentrate on making sure they individually have a great experience and make sure they think of Rover every time they want to park.

Speak to the importance of MARKETING and positioning your product as the “must use” or “the best option”, as opposed to the idealistic reliance on a pure meritocracy.

I think of Rover as a marketing company as much as we are a technology company. For Rover the technology isn’t something you can patent easily, which means in order to create barriers to competition you need to create something that is bigger than your service. I won’t lie: the recent love or hate for the “sharing” model has helped tremendously in defining our brand. But in order to take advantage of this we needed to make sure that we are always a part of the conversation whether it be through PR, Advertising, Social Media or through opportunities like this column. 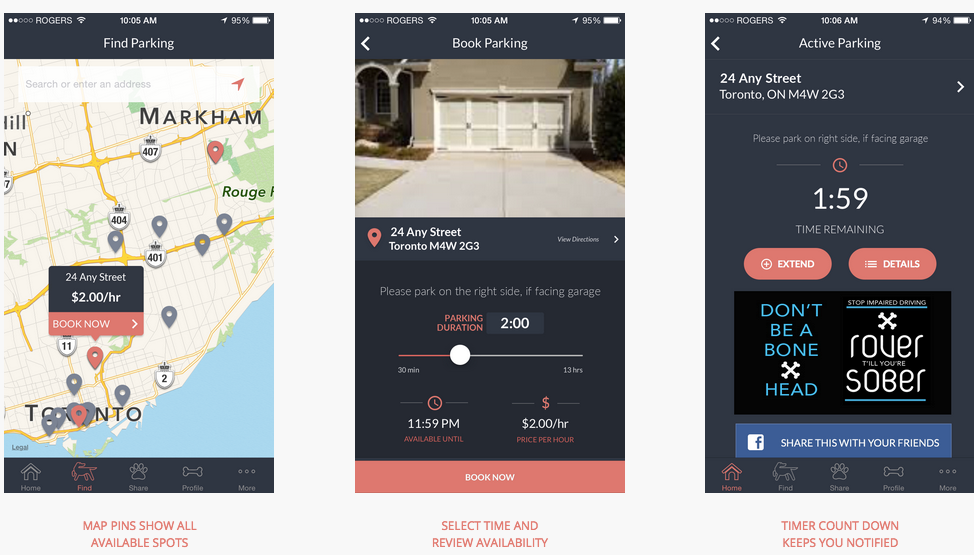 What’s one thing you regret doing or not doing? If you could do it over again with ONE correction, what would it be?

My biggest regret was not staying with my original development contractor and not committing to my concept from the outset. Had I stuck with the originally team, sucked it up and spent the $15,000 right away, I would have had a product in the market in January 2015 instead of 5 months later and more money out of pocket. The decision was simply a cold feet monetary one at the time and I regret not getting the product into the market sooner.

Now you have to make your own motto for start-ups in general…words to live by…GO!

There is never a perfect time to take the leap. Quit thinking about it and just dot it. If you wait too long there won’t be time or someone else will just take your place.

Rover has been live since July of this year and can be downloaded through iTunes. An Android version is scheduled for release in October.