Today I’d like to take a break from satire, and discuss an important subject. It’s a sensitive one for many, so if you don’t feel ready for criticism and sarcasm aimed at a widely beloved organization, come back later when you’re more fun. The problem is that everything that is wrong about Silicon Valley—a deluded sense of what defines freedom, enthusiasm for ideas without thinking critically, and more—is also what is wrong with Burning Man.

I Go To Phish Shows, I Know Some Things

Before current and former Burners jump down my throat about how I couldn’t possibly understand Burning Man without ever having gone, I’d like to show off my relevant credentials. At a high level, I’m an avid outdoors person and I have zero aversion to spending time “roughing it.” I’ve been backpacking more times than I can count in places like Ontario’s provincial parks, California’s Joshua Tree, and Virginia’s Shenandoah Valley. I like being prepared and genuinely self-reliant.

More importantly, I’ve been to 78 Phish concerts. I repeat: seventy eight. This fact would normally prove very little about me aside from “proficiency in alienating potential sex partners” and “notable marijuana consumption.” But in this context it does show that I am a card-carrying hippie—a standard-bearer of the liberal counterculture. Whatever you Burners think you’ve experienced, I’ve seen worse. A week in the desert surrounded by jackasses from central California doesn’t compare to the Commerce City Marriott Renaissance parking lot on Labor Day weekend after three nights of Phish, I guarantee you.

I deeply understand the appeal of a community of people being true to themselves and attempting to escape the yoke of modern capitalism. I understand the desire to celebrate this freedom together. Unfortunately, what Black Rock City, LLC has created in the middle of the Nevada desert is a mini reproduction of the national caste system wrapped in a blanket of contradictory logic.

The creation and destruction of Black Rock City leaves a huge environmental footprint. One of the basic principles of Leave No Trace is “visit in small groups,” which is very difficult to do when you’re gathering sixty-six thousand people in one environmentally sensitive spot. The typical Burning Man attendee generates double the CO₂ emissions of an average American just traveling to the event, not to mention the various art installations created solely to explode and shoot fire by burning fuel. And lest we forget, the entire celebration climaxes with the incineration of a 43-foot-tall wooden structure.

The only people who could fool themselves into believing an event where thousands of pounds of wood are intentionally set on fire is also a Leave No Trace event are effectively the same people who have done the mental gymnastics to rationalize mobile web optimization as something that profoundly changes the world.

Then there’s the ticket price. This truly baffles me, as it is a living example of irony that nobody who attends Burning Man seems to have an issue with. If, as many people have explained to me, the idea behind Burning Man is to create a society free of capitalist interests, where everything you need you bring and everything you don’t have you get by trading with others, why is there a mandatory fee to get in? Call me crazy, but turning over $390, plus taxes, plus fees in order to set up a city with police, emergency services, and toilets is a long way away from “radical self-reliance.” 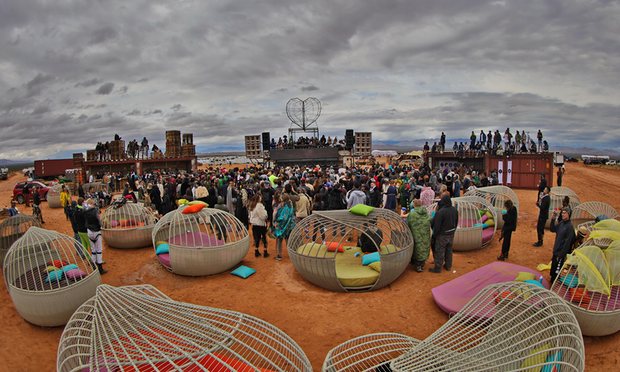 Also, it should be noted, Burning Man only became a non-profit organization in 2014. Since its inception in 1986 until two years ago, the organization behind Burning Man was most assuredly for-profit. Only since 2014 have the organizers shared their salaries, and only because they had to.

Most of the organizers of the event make upwards of $155K a year. That does not include the $43,000 in profit that the six board members raked in after selling their individual shares of Black Rock City, LLC to the new Burning Man non-profit after its creation. Now, to be fair, they could have raked in a lot more, as those shares were independently valued at over $1.5 million each.

Regardless, the legal entity of Burning Man (a festival where giving and de-commodification are supposedly core principles) was assigned a numeric value and sold to a parent company, and the individual organizers making that sale retained a profit. Freeing yourself from commercialism had never been so lucrative. Maybe they learned this strategy of maintaining an altruistically worded mission statement while generating profits from the tech industry.

Then there’s the legion of turnkey communities and “plug and play” campsites run and funded by Silicon Valley’s upper echelon. Even Elon Musk commented that “Burning Man is Silicon Valley,” an unintentional accurate comparison. Sergey Brin, the Winklevoss twins, Mark Zuckerberg, Jeff Bezos, Larry Page, and others from venture capitalists to Hollywood elite pay thousands of dollars to attend Burning Man without any obligation to actually participate in Burning Man. They throw money all over the place, hiring “sherpas,” concierge services, private toilet and shower trailers, and constructing huge traveling cruise barges to traverse the desert like Jabba the Hutt on his pleasure skiff.

The very people and power structures Burning Man was created to escape from have shown up to control the event with their largesse. In no scenario could I imagine myself paying hundreds of dollars just to watch Mark Zuckerberg sail past me on a ship full of models flown in from New York while I wait patiently to use an almost-full Porta-Potty. I’d be working overtime to convince myself that, if I only asked for the gift of inclusion, Zuckerberg would pull over and welcome me aboard. That’s how it works, right? I’d offer him a hug and he’d let me drink craft beer on his sand-yacht. Ha. 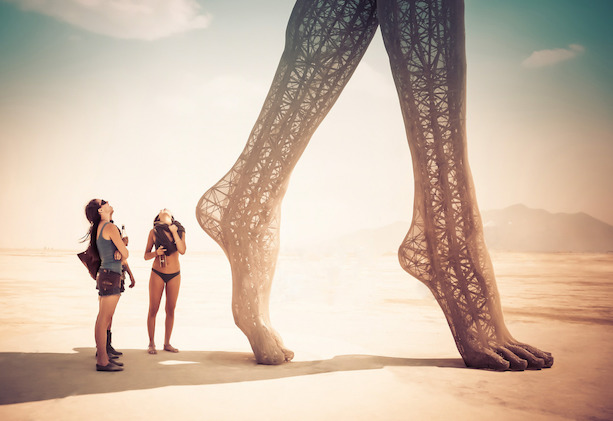 I’ve been to festival concerts. I’ve seen the unwashed masses huddled together, slowly filing out of The Gorge, spun on mystery drugs and desperately looking for a stand where they can buy an overpriced bottle of water. It’s a real problem, the commercialization and privatization pumped into events marketed to compassionate people. Wanting to be left alone with like-minded people away from predatory forces like advertisements and commercial interests is a natural urge in today’s connected yet fragmented societies. But Burning Man is really just more of the same, and convincing yourself otherwise only makes the problem worse.

Feature image courtesy of BusinessInsider.com via via EUTERS/Jim Urquhart