To say the Snoo-crew at Reddit has had a tumultuous 2015 would be the understatement of the year. From the launch of the Upvoted podcast to the massively mishandled dismissal of a key employee, the Reddit team have been on one heck of a rollercoaster ride. CEOs playing musical chairs and moderators darkening their domains are just a few of the intriguing happenings Reddit onlookers have been exposed to thus far. To bring you up to speed on all the extracurricular activities, the gang here at SnapMunk thought it was time for a year-in-review post of Reddit’s ridiculously rambunctious 2015. Just think; we’re barely even half-way through the year! Ready for Reddit Watch 2015? 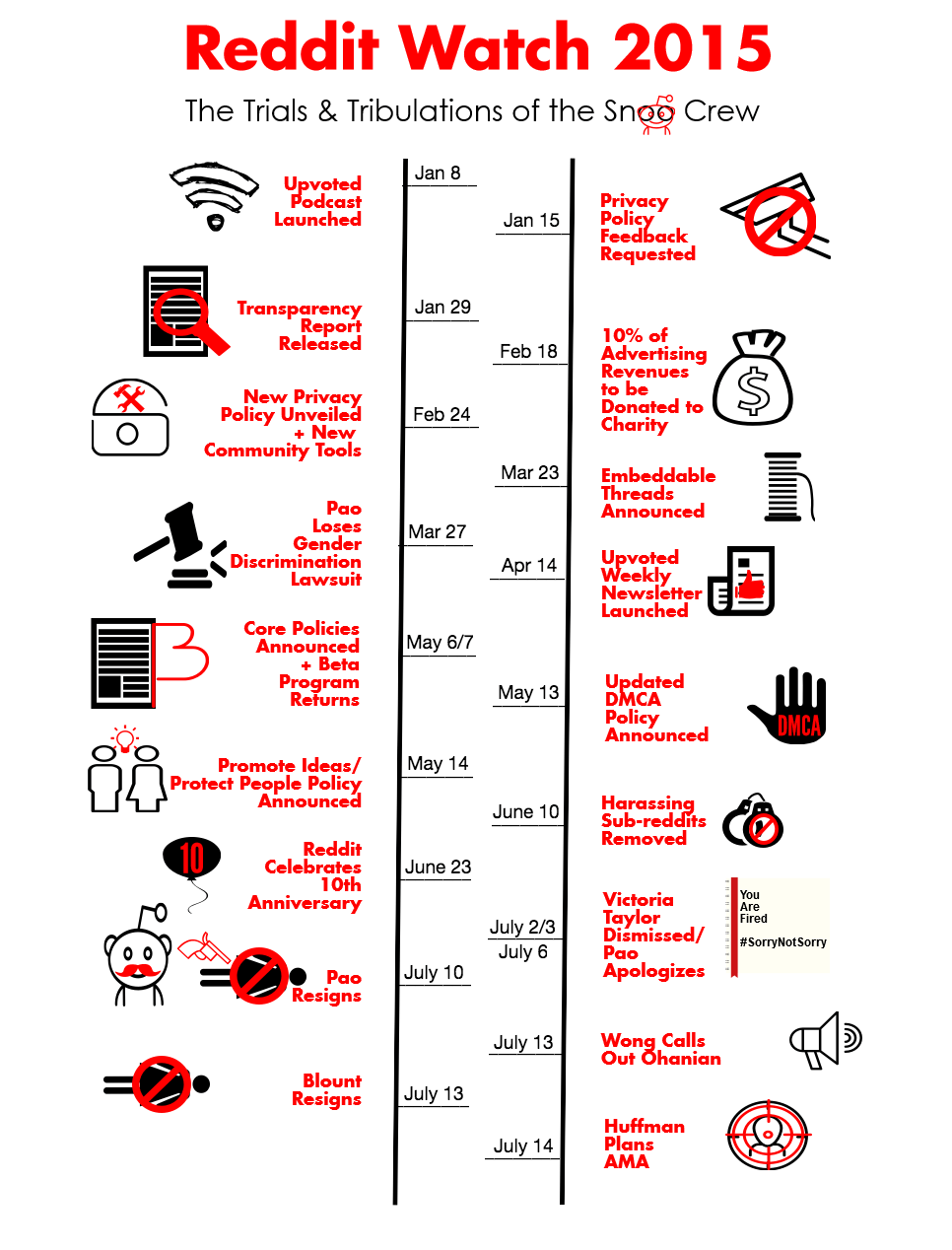 The Upvoted podcast is launched. Alexis Ohanian and crew are just the latest bunch to hop aboard the podcast train. From Jason Calacanis’ This Week in Startups podcast to Tim Ferriss’ podcast, many entrepreneurs and angel investors are reaching out to their audiences via audio blogs. The launch of Upvoted started 2015 off on a high note for Reddit. (What goes up must come down, right?)

The end of January brought about Reddit’s release of their first transparency report. Like their privacy policy, this attempt at transparency would be called into question in the months ahead. (Can you say Snoo soap opera?)

Reddit must have been feeling residual romance from Valentine’s Day, because on February 18th they announced 10% of 2014’s advertising revenues would be donated to charity. Now you might be thinking 10% isn’t much, but bear in mind Reddit is a 10-year-old venture-backed company that still isn’t profitable. Improving their social street cred would do little to save their reputation when turmoil came calling by mid-year.

The team announced new embeddable threads near the end of March. These embeddable threads help spread Reddit content around the web, rather than keeping all user submitted information locked within the Reddit silo. From news sites to user blogs, data posted from community members could now be posted in a myriad of places, thus extending the community’s reach even further.

Reddit’s interim CEO Ellen Pao lost her gender discrimination lawsuit against former employer Kleiner Perkins on March 27th. Championed by many for her willingness to cast a spotlight on the tech industry’s gender bias, this lawsuit was fuel for the fire of some Reddit users.  Numerous Reddit users looked upon Pao as a disengaged CEO, out of touch with her community and with a proven willingness to sue if she didn’t get her way.

Mid-April brought about the launch of the Upvoted weekly newsletter.

At the beginning of May, Reddit users were greeted with an official announcement of company core policies as well as the return of Reddit’s popular beta program.

Reddit’s ‘Promote Idea, Protect People’ policy was announced to the community on May 14th.

In what might have been the beginning of the end for interim CEO Pao, on June 10th a number of questionable sub-reddits were banned from the site.

The beginning of July saw Reddit dismissing a key employee (Victoria Taylor) that many site moderators relied upon as their liaison with company administration. Rumors were rampant, with numerous users laying the blame on Pao for Taylor’s departure. A Change.org petition was started calling on Reddit to remove Pao from her CEO position and many volunteer moderators shut off access to their sub-reddits.

On July 6th, Pao posted a brief note on Reddit apologizing for Taylor’s dismissal and promising better tools and communication options for the community. The majority of her note focused on updates for the community with not much more than lip service paid to the mis-handling of Taylor’s firing.

Just four days later, Reddit board member and Y Combinator head honcho Sam Altman announced Ellen Pao’s resignation. Why this announcement came from Altman and not Reddit co-founder Ohanian is a curiosity in and of itself. Original Reddit CEO Steve Huffman was announced as the new CEO, effective immediately. In one sentence on the Reddit comment thread discussing Pao’s departure and Huffman’s return, Ohanian briefly owns up to his role in Victoria Taylor’s dismissal, something he previously allowed Pao to take the blame for.

Three days after Pao’s resignation, former Reddit CEO Yishan Wong calls out Alexis Ohanian for allowing Pao to shoulder the blame for Taylor’s dismissal. Rather than openly admitting he was responsible for the decision to relieve Taylor of her duties, Ohanian let the Reddit community and press believe it was Pao’s decision to remove Taylor. In the same comment thread, Wong questions Ohanian’s leadership and business ethics.

On the same day Wong is calling out Ohanian’s questionable ethics, Reddit’s Chief Engineer Bethanye Blount resigns over the Reddit board’s decision to push Pao off a ‘glass cliff’.

CEO Huffman announces plans for a Reddit ‘Ask Me Anything’ to be held on July 16th to discuss the community’s desires for plans moving forward. Whether community commentary is taken into account in the decision-making process is anyone’s guess. With investors breathing down their necks to turn Reddit into a profitable venture, the AMA community outreach effort might be just for show. With a growing legion of disillusioned community members heading for Reddit competitor VOAT (voat.co), Huffman’s efforts to placate users might in fact be too little, too late.

The rest of 2015 will indeed be interesting to see if Reddit can win back the trust of their community or if it will suffer the same demise as its predecessor Digg. Loyal communities made up of unpaid labor can be a fickle bunch. They can make or break your company, a lesson that is just beginning to sink in with the Snoo crew.