Human health was a huge tech focus in 2016. Innovations focused on helping people monitor things like their diet, medication, and heart. In fact, last year we saw a strong rise in new technology for replacement hearts.

It makes sense considering 2016 was also a record year for organ transplants. The U.S. Department of Health reported an increase of 8.5% in transplants setting the national record at 33,606. That’s a beautiful thing considering that number is due to the 9.2 increase in the number of deceased donors providing multiple organs, and that includes the heart.

Still, the recipient list is long and companies are racing to make replacements for hearts. As a result, I decided to compile a little list of 2016’s most notable entries in the field and see who’s closest to making the new replacement human heart.

First on our list is Penn State which is doing most of its work in stem cells. Their research is, currently, focused on replacement and repair with the ongoing goal of the creation of a full heart. What they’ve succeeded in doing is create epicardium cells which are the cells that make up the surface of the organ. They’d already made myocardium cells back in 2012 which make up the internal muscle of the heart that pumps blood.

Currently, their innovations allow them to repair existing damage to those areas of the heart including providing repair to patients who have suffered a heart attack.

Next is Carmat who’s probably the shakiest entry in the list. Relatively new to the field they are currently going through their first wave of clinical trials. Their heart uses hydraulic fluid paired with an implanted pump. The sensors that control the pump are designed to monitor the patient’s level of exertion and accommodate it accordingly. 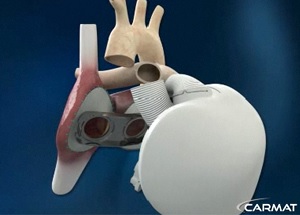 The downside? The battery for the unit connects to a battery pack outside of the body via wires from the back of the neck. Oh, and two of their four patients died during their first run. Still, they passed European regulation and got approval for major clinical trial this August. If you want to roll the dice on that.

Last is SynCardia with what they call the Total Artificial Heart. Their design was, originally, a system built to substitute the heart for patients waiting for a transplant. As they have over 1,600 successful temporary replacements (among the most in the US) under their belt they’ve moved onto the goal of making their system a permanent replacement.

Of course, the obvious issue is the six-kilo air compressor accessory one has to carry around that connects to the heart itself. Despite the fact that it keeps electronic components out of the heart it’s still a loud, obnoxious weight.

Each of these organizations is rushing to complete their solutions for the exact replacement to the human heart. If any of their solutions seems frightful or downright undesirable, then you may want to start considering a few minutes of jogging a day. At the very least, start talking to your doctor again. They miss you.