If you thought vinyl records and record players had been relegated to relevance only in episodes of Pawn Stars, you were wrong (as was I). The Entertainment Retail Association (ERA) just announced that vinyl records had upstaged their digital counterparts in weekly sales for the first time ever in the UK. Meanwhile over in San Francisco, concept company Pink Donut is putting a new spin on the so-called aging audio technology, with a device that turns the tables on the concept of a turntable record.

The RokBlok is a portable 4.33 x 2×2-inch device that can play records placed on any flat surface–yes, any flat surface. The fairly unassuming block made of bamboo combined with fiberboard has the ability to crank out tunes from 33 ⅓ RPM (LP) and 45 RPM records. It weighs a mere 3.2 ounces, making it far and away the most compact and portable means to play a vinyl record. Inside, it holds a Bluetooth receiver, speakers, and a rechargeable battery.

To play a record using RokBlok, you simply place it on top of a disc and adjust a lever. That triggers rubber wheels built into its underside to start spinning. In turn, a needle begins to travel over the grooves in the record, in the same way that a stylus would in a standard record player. The audio is channeled first through a preamplifier, and then a speaker that’s built into RokBlok.

The built-in speaker is not the only way to play music using the RokBlok, though. Since it has Bluetooth connectivity, you can pair it with Bluetooth speakers or earphones over a distance of 30 feet. Wave your hand over the block, and it stops spinning. If you forget to it magically stop with a flourish of the hand, the RokBlok will do it’s thing for about four hours on a full charge. You can then recharge the battery, which returns to full capacity in about two hours.

If you’re among those who still enjoy listening to vinyl records, you might fear damaging discs by having the RokBlok spinning directly over them. Pink Donut reassures its backers that the device is engineered in such a way that the weight is distributed evenly across the scratch-proof wheels and not the needle. So according to the makers, scratches will occur only if it’s operating on an uneven surface. 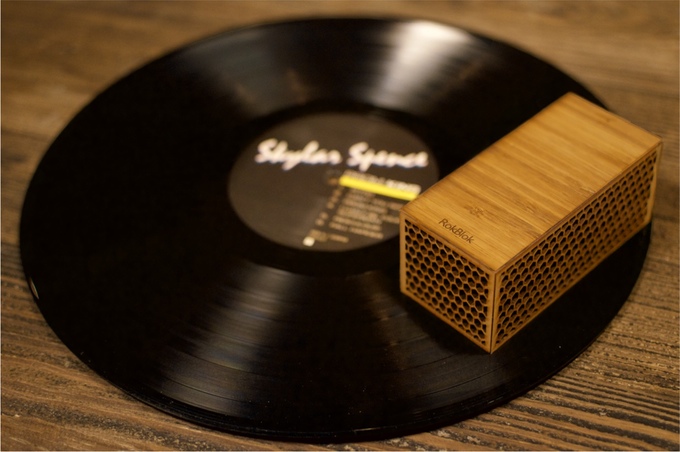 RokBlok is currently killing it on the Kickstarter charts having raised over $120,000, which is twice its original funding goal. There’s still about a month and a half before the campaign reaches completion, so the final amount it amasses will likely be over the $200K mark.

Crowdfunders who were really quick on the draw were able to book their RokBlok for the early bird prices of $59 or $69. Since those have sold out, the minimum pledge that gets you a unit is $79; that’s still 20 percent off the $99 retail price. The estimated delivery date for backers is in September of 2017.