Ever since we started watching movies like Blade Runner, X-Men, Captain America and of course, Sharktopus (I fucking wish I was making that up) most of us have been obsessed with the possibilities of genetic research. Over the past few decades, science has been giving us good reason to believe that our fantasies may one day live outside the silver screen. 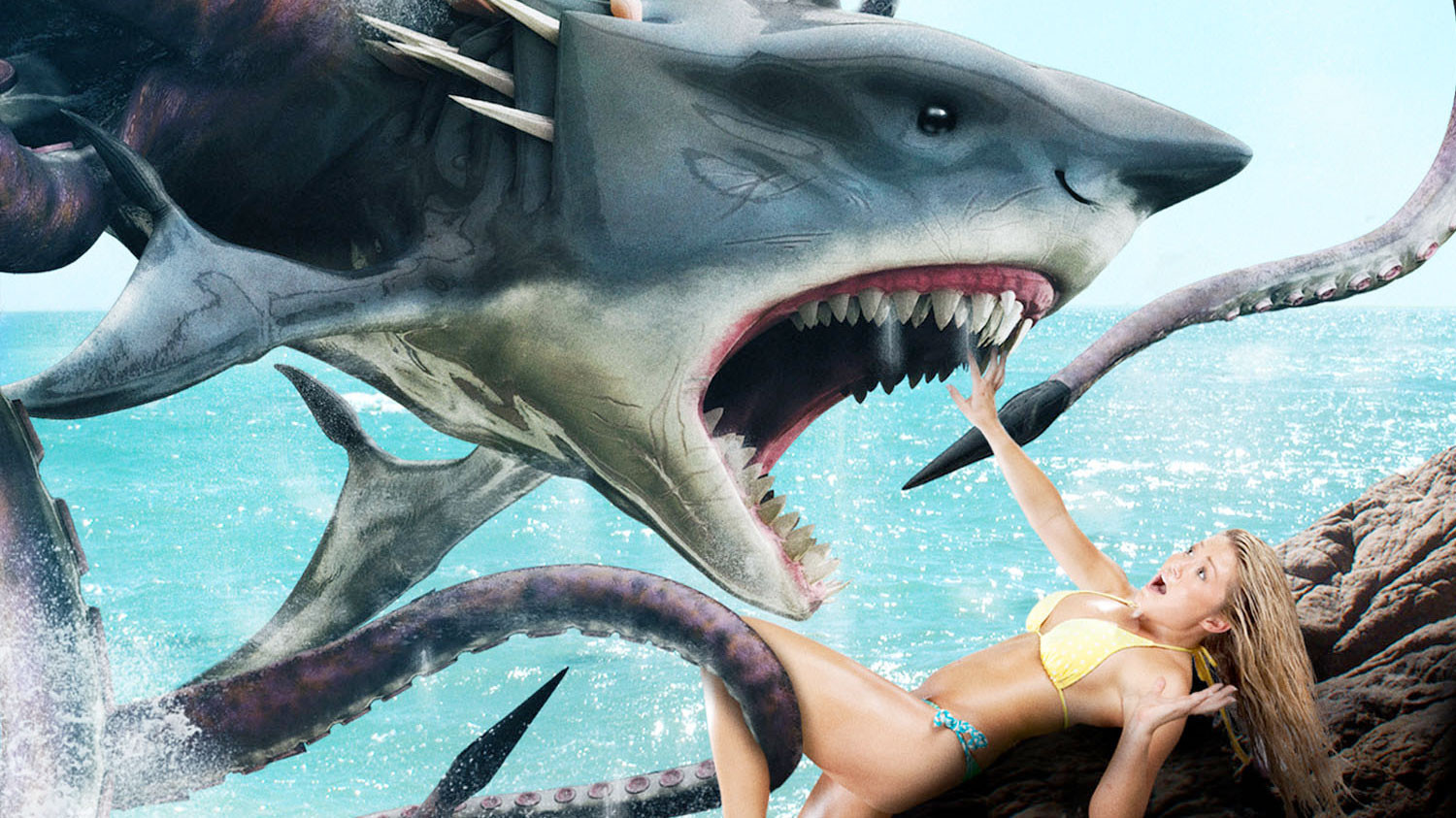 It’s a shark, but it’s also an octopus…at the saaaame tiiiime

We have cloned sheep without making Australian farmers take off their condoms; we have birthed companies like 23andMe who, in a matter of 6-8 weeks and for only $200, can analyze your saliva to let you know what conditions you might pass on to your offspring, how you might react to certain medication, what significant health risks you face and whether or not milk will probably make you fart; then out of the University of California, Berkeley, in 2012 we got CRISPR, a new technology for gene therapy that allows scientists to literally edit genes to impact deficiencies in not only an individual person, but on their “germ line” so that the edits are passed on through all subsequent generations.

The are-you-fucking-kidding-me train of progress in the field of genetics has been nothing short of astonishing, but recent news has me concerned. I am starting to fear that the momentum behind that train is driving it off the rails, and instead of heading towards a framework built on enablement, we are being steered towards a more fundamental comfort with constraint.

Just recently a law suit was filed by two Palo Alto parents on behalf of their son Coleman Chadam, claiming that he was unfairly forced out of a middle school. What was unfair about the displacement?

Colman has genetic markings that would suggest he is susceptible to developing cystic fibrosis; two children already in attendance at that middle school (Colman’s family had recently moved from Singapore) already have cystic fibrosis; if children with the disease are near each other, they become more vulnerable to contagious infections. Colman was the last one in, so they bumped him.

Again though, he doesn’t actually have cystic fibrosis. Here is a statement from the child’s doctor that is referenced in the law suit:

“It is unfortunate this boy has been given the label of CF and is now recognized that there are probably many of these children in the community who will be diagnosed as CF carriers but have a second minor gene lurking in the background, but no disease…He has a slight asthma tendency and also some nasal allergy but nothing else evident related to CF…”

That’s like charging me as a sex offender just because I stared at someone’s crotch for six minutes while sniffing a pepperoni stick and humming “Eye Of The Tiger”. Certainly uncomfortable, but hardly against the law.

What we have here is the conceptual power of genetics inspiring people to infer and apply a fencing of indisputable and irreversible categorizations – categorizations that, due to the perceived permanence of genetic influence, severely limit the physical and psychological flexibility to which the categorized subject has access.

In other words, because so many people are comfortable assuming that our genes map out a comprehensive, unavoidable destiny (which they do not), once a genetic categorization is dropped on someone, it’s pretty fucking hard to shake.

Don’t be too discouraged. The law is trying to help. There is already something in place called the Genetic Information Nondiscrimination Act of 2008 (GINA) that explicitly protects people from genetic discrimination.

Currently the act only addresses protection in the contexts of health insurance and employment, but I have confidence that its coverage will expand fairly quickly as more trials like this arise (and more will arise). Especially when life insurance companies are getting cheeky with exemptions; a 36 year old woman was denied life insurance last year because she has a gene that is associated with an increased risk of breast and ovarian cancer.

Naïve as it may sound, these cases of external discrimination by premature categorization are not what worries me the most. What worries me the most is that, despite a conflicting Millennial addiction to feeling special, many of us desperately want to be categorized. With something as powerful as genetics defining the categories, we are now running a great risk of rampant self-discrimination and an empowered culture of stretching our genes to fit some of our more unflattering tendencies.

I might not make many friends by using this example, but I think the “sexual orientation” landscape offers the perfect lens for a glimpse into the future.

According to a recent Wired article, being “Demisexual” is picking up steam – it means that someone has little to no interest in sex, rarely feels desire, but under circumstances of very close relationships, perhaps after a long period of time, they might fuck. They’re mostly asexual, but not entirely. They’ll probably fuck.

Much of this started on the web and, as the article states, “They don’t necessarily describe fixed identities but serve more as beacons for people to locate each other online.” But it’s more profound than that because “each other”, in this context, has embedded in it the need to connect with others at a very granular linguistic level. There appears to have been some sentiment that, without a very specific beacon, they were otherwise lost – they didn’t know where they fit.

But sure they did. They fit right around here:

And I fit right around there:

Or if you illustrated their attitude towards sex as a curve, they’d be one of these curves:

And I’d be one of these curves:

I guess I could call myself a “Humporomantic Anti-Blue Permasexual”. Or I could just sorta roll with whatever I think I am and through a series of conversations and personal interactions, eventually become acquainted with people who are also sort of in the ballpark of heterosexuals who enjoy frequent sex but aren’t technically perverts. Or maybe not.

As Eckhart Tolle writes in A New Earth: Awakening to Your Life’s Purpose:

“If you can be absolutely comfortable with not knowing who you are, then what’s left is who you are – the Being behind the human, a field of pure potentiality rather than something that is already defined.”

That’s not where we’re headed though – we’re going hard in the other direction. Despite all kinds of historical resistance to labeling, we seem to be getting more and more uncomfortable with that kind of ambiguity. We want beacons so that our nuanced independent states are paradoxically no longer independent, but connected and formally defined to enable validation and discovery on both the internal and external layers – and well beyond the questions of “who”, “what” and “where”, but all the way down to the question of “how much”.

I call this The Hashtag Complex.

I don’t mean to belittle the struggles of someone who is confused about their sexuality, and I am not trying to pick on anybody. I’m just calling out a trend.

I respect these particular people for their confidence and resolve to fill in a complex spectrum for all those in need of an easily accessible social nesting place. The pioneers here are even quite realistic about the improvisational nature of their own model; as the article explains, “…although labels are a big part of it, demisexuals and gray-aces don’t get too caught up in the lingo. They tend to be pretty comfortable with the idea they might change.”

My point is that I believe a great deal of their comfort depends on informality – genetics hasn’t been able to stick its nose into their business.

Sometimes Genes Can Fit Too Well

The hazard is the eventual intersection of genetics and the perimeters of thousands of behavioral characteristics, including ones that should be considered unbecoming, counterproductive, stress-inducing or even outright harmful. What we don’t need is anything resembling a stamp of scientific support for destructive behavior, allowing people to absolve themselves of working out their bullshit because “it’s in my genes – what am I supposed to do about it?”

Like when someone is a cranky twat in the morning and wears their bratty behavior like a fucking bullet-proof vest as they grumble about coffee and pretend like everyone in the military is a sucker for a good sunrise.

Ya, it’s going there all right; a study from 23andMe is showing that how chipper you are in the mornings could be “hardwired” through 15 particular “single nucleotide polymorphisms” (mutations in our genome); other studies have also associated about half of those SNPs with sleep. So guess what they’re doing with that information. Oh, you know it – they’re developing drugs to target our circadian rhythms.

What comes next is the dovetailing of genetic categorization, The Hashtag Complex and a growing aversion to being told that we have a responsibility to fine-tune the shittier parts of our personalities; voluntary self-discrimination. First, these grumpy cocksplinters are going to get assigned some special name, like “Demisomniacs” or “Desynchronized Semi-Circadians” or “Pre-Pubescent Assholes”. They’ll then gladly submit themselves to the genetically endorsed title, and instead of acting like psychologically robust adults, they’re going to act like biologically incarcerated pricks. 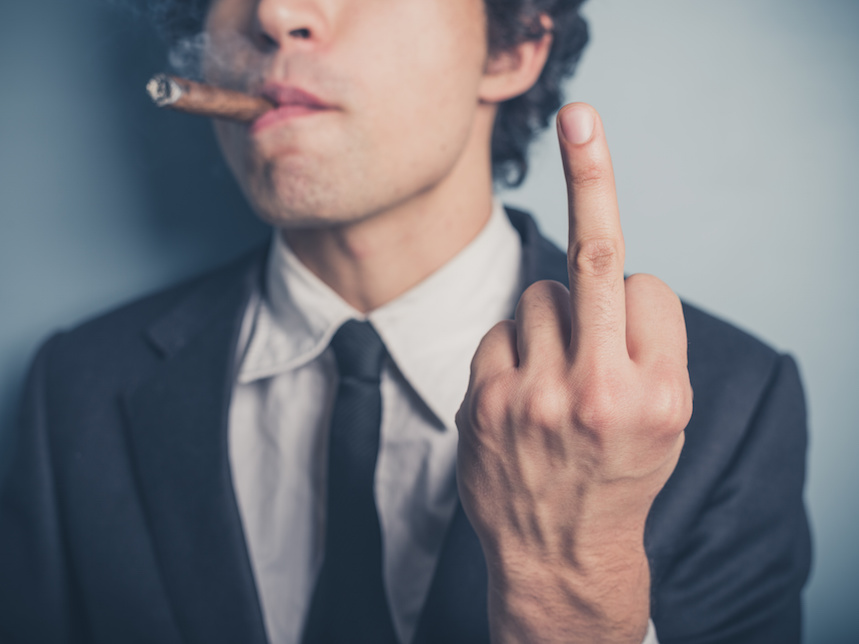 The sky is the limit: sensitivity to criticism, anxiety around children, propensity for boredom (oh wait, we did that one already), accelerated exhaustion from exercise, fear of foreign cohabitants, aptitude for adultery, susceptibility to smartphone distraction, exaggeration egocentricity with oral sex, and so on.

We have a formal system in place to handle unwelcomed, outbound discrimination; it is our legal system and despite its many flaws, at its core, it fights helplessness and demands personal accountability. Self-discrimination, on the other hand, is getting fitted with fresh genes and the network of systems emerging to handle it is all too easily optimized to affirm helplessness and subsidize personal accountability.

In other words, because so many people are comfortable assuming that our genes map out a comprehensive, unavoidable destiny (which they do not), once a cushy genetic categorization is wholeheartedly adopted, it’s pretty fucking hard to shake.

This is no longer “the future” – this is happening. We need to be very aware of how we conduct ourselves in the wake of genetic enlightenment. This kind of progress is supposed to encourage us to expand, not contract. Over-diagnosis is already a problem and the more we uncover about ourselves at the scientific level while craving categorization at a social level, the more risk we run of breeding a culture that finds far too much freedom in the inevitability of defeat.

Nature vs. Nurture has been a main event for some time. Now the gloves are off and we’re smack in the middle of both corners, calling the shots. As impressive as their form may be, we need to be careful to not nurture the living shit out of nature, otherwise it won’t be a fair fight.