Smart and discreet don’t seem to go together a lot in wearable product design. Take Google Glass, for example; it has a ton of useful features and integrations; at the same time, its select few users end up looking like cyborgs, or at the very least, awkward surveillance agents. For those of us who’d like our smart glasses to match our understated (and not futuristically freaky) sense of fashion, Vue offers a much-needed alternative-needed by at least 6,000 people who have pre-ordered them on Kickstarter so far.

On the surface, Vue works like a standard pair of glasses–users will be able to choose between prescription, non-prescription, and sunglass lenses. The lenses go onto frames which come in two configurations: classic and trendy. Users can further customize each type of frame with a choice of colors, shapes, and textures. From there, at a weight of 28 grams, Vue does a great job of carrying all the technological bells and whistles without sacrificing style or size. And there are a lot of those bells and whistles in there.

Within its unassuming exterior, Vue smart glasses are packed with an ARM Cortex-M3 processor, a suite of sensors (accelerometer, gyroscope, IR proximity sensor), and a Bluetooth receiver. These components combine to serve up a range of features not as expansive as those offered by Google Glass, but impressive nonetheless. Lithium polymer batteries with an almost 3-day single-charge standby time power the entire thing. The charger is packed into the case in which the glasses come, so they charge passively every time you pop them back in their little home.

On to the interesting features. The smart glasses come with a built-in microphone, which means that users can make calls or activate the digital assistant without having to physically interact with their phones. While conducting phone calls or playing music, Vue uses bone conduction technology to relay audio straight to the inner ear. That means never having to use earphones to specifically listen to output from the glasses. The direct-to-ear audio feature can also be used to get turn-by-turn navigation instructions or listen to notifications while driving.

Vue smart glasses also comes with fitness tracking functionality. The glasses keep track of distance covered and calories burned. Users are reminded to get moving if the accompanying app detects inactivity for a while. For the absent-minded among us, there’s even a ‘Find My Glasses’ feature on the app that, well, helps you find your glasses.

In keeping with its minimalistic design philosophy, Vue smart glasses don’t have any physical buttons or ports. Instead, a capacitive touch interface is built into the frame to let users communicate with their eyewear. A gesture-based approach is used to trigger various actions; a tap on the frames answers a call, swiping lets you cycle through a playlist, and so on. Gestures are customizable via the app. 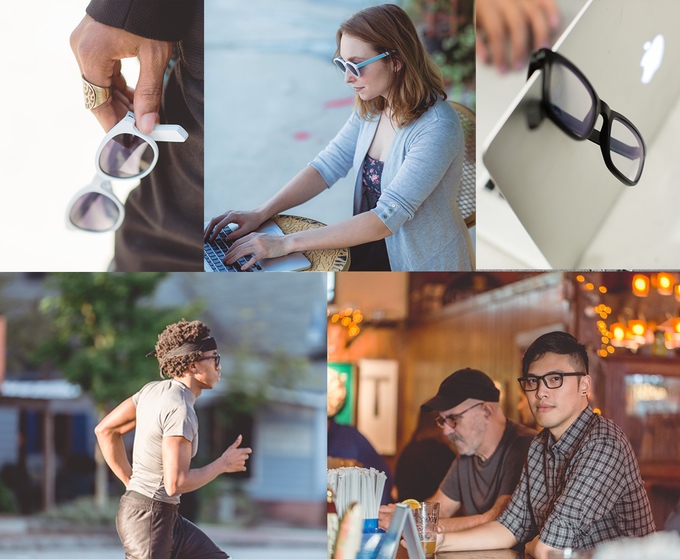 Vue’s extremely successful Kickstarter campaign comes to an end in about a week. It has raised over $1.2 million already, easily outdoing its initial $50,000 goal. Since the $159 pledges are all taken, you can now (at the time of writing) acquire a pair of Vue glasses for $179, which is 33 percent off the $269 projected retail price. Deliveries are expected to commence July 2017.