Those were three small words for Marty McFly, but for humanity, it was the starter pistol that signaled the beginning of a technological arms race towards fancier footwear. Nike eventually realized humanity’s dream of self-lacing shoes, but there’s still room for greater advancement. The Digitsole SmartShoe is evidence of that; these smart shoes can do everything from activity tracking to giving personalized feedback on your gait. The team behind it has taken to Kickstarter to fund a preliminary production run, and the campaign has already reached its goal amount with almost four weeks to go.

First things first. The Digitsole SmartShoe is not self-lacing; it does, however, have a cool way of securing itself to a wearer’s feet. The makers call it “auto-tightening,” and the Kickstarter page explains that there’s an engine in the back of the shoe that secures it around the foot. It kicks in once the smart shoes are on, and a mechanism that looks similar to a butterfly door brings the tongue pad down tightly over it. The auto-tightening can be controlled either using the accompanying mobile app or by pressing a button on the shoe.

The shoes also pack a heating pad, because why not. It uses energy from the battery connected to a heating element to warm up the insole. Included within is a thermostat so you can set a desired temperature via the app, and the heat is turned off automatically once it reaches the temperature you want. Using the heating feature reduces battery life from about two weeks to a few hours, so that’s something users need to keep in mind.

Everything else the Digitsole SmartShoe does is categorized as either a smart feature or activity feature. One of the smart features is a walking analyzer that collects data from sensors in the shoe to understand a wearer’s posture and stride. The results are then displayed to users on the mobile app. Digitsole also doubles up as a walking coach, giving recommendations on how to improve walking efficiency and prevent injuries.

Activity sensors in the shoes are used to keep track of data such as distance covered, calories burned, and speed. To prevent injuries that result from deteriorated cushioning, the Digitsole SmartShoe comes with a cushion monitor. It displays the percentage of deterioration over time and even recommends new inserts. 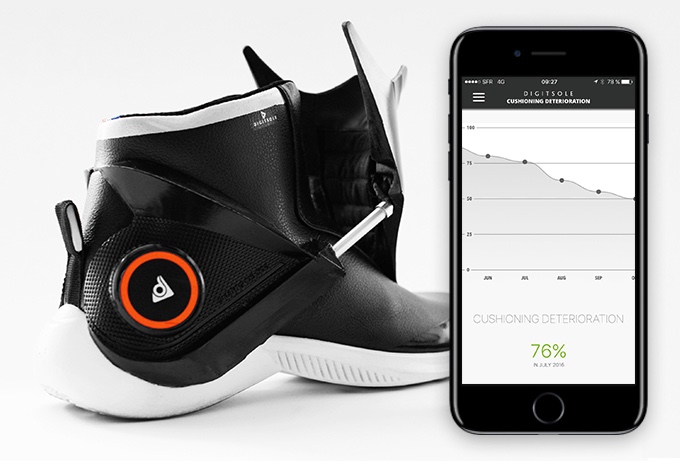