With the exception of the Austin arts and startup scene, much of the country sees the South the way the South sees Florida: uncultured, regressive, and distinctly lacking the capacity to innovate. But the disdain and embarrassment with which we here in Dixie are saddled is totally undeserved (when it comes to the South in general, that is…Florida, well…).

The South’s metropoli, like Atlanta, are populated by a panoply of diverse people and companies. Combine the low cost of living with modern infrastructure and an educated (yes, educated) citizenry, and you have everything you need to take a startup from Fort Sumter to Appomattox…er, acquisition…in no time at all. Atlanta’s high concentration of Fortune 500 companies, two universities, and an entrepreneurial spirit that encompasses everything from cutting edge computer science to suburban front lawn BBQ is proof that businesses can not only succeed but thrive in the South.

Tomorrow really was another day, Scarlet! And thanks to the announcement of the Techstars inaugural Atlanta accelerator class, tomorrow is on its way. Today.

The Lowdown On The 10 New Startups of Techstars Atlanta

Director Tyler Scriven and Managing Director Michael Cohn went to great lengths to find the ten best startups they could for Techstars Atlanta’s first class. They traveled to Tel Aviv and met with “dozens and dozens” of enthusiastic founders and entrepreneurs, ultimately inviting two companies to leave the deserts of the Holy Land and experience the much moister heat of a Georgia summer. More than a thousand applications from 69 countries on all six populated continents were reviewed. Startups from Brussels, Belgium and Waterloo, Canada also joined the Israelis in Techstars’ newest mix.

43% of Techstars Atlanta’s applicants came from the Southeast United States, and three Atlanta-born startups will be joined by one from Savannah to represent the Peach State itself. Proportionally, the South is clearly holding its own, and Cohn swears their local origins didn’t change their chances in the slightest:

“If our ten very best companies would have come from Atlanta, we would have ten local Atlanta companies. At the end of the day, we picked the best, from thousands of applications.”

Two companies from Los Angeles round out the ten total classmates, and ensure that the West Coast will be introduced to all that the Hollywood of the South has to offer in terms of forward-leaning tech. 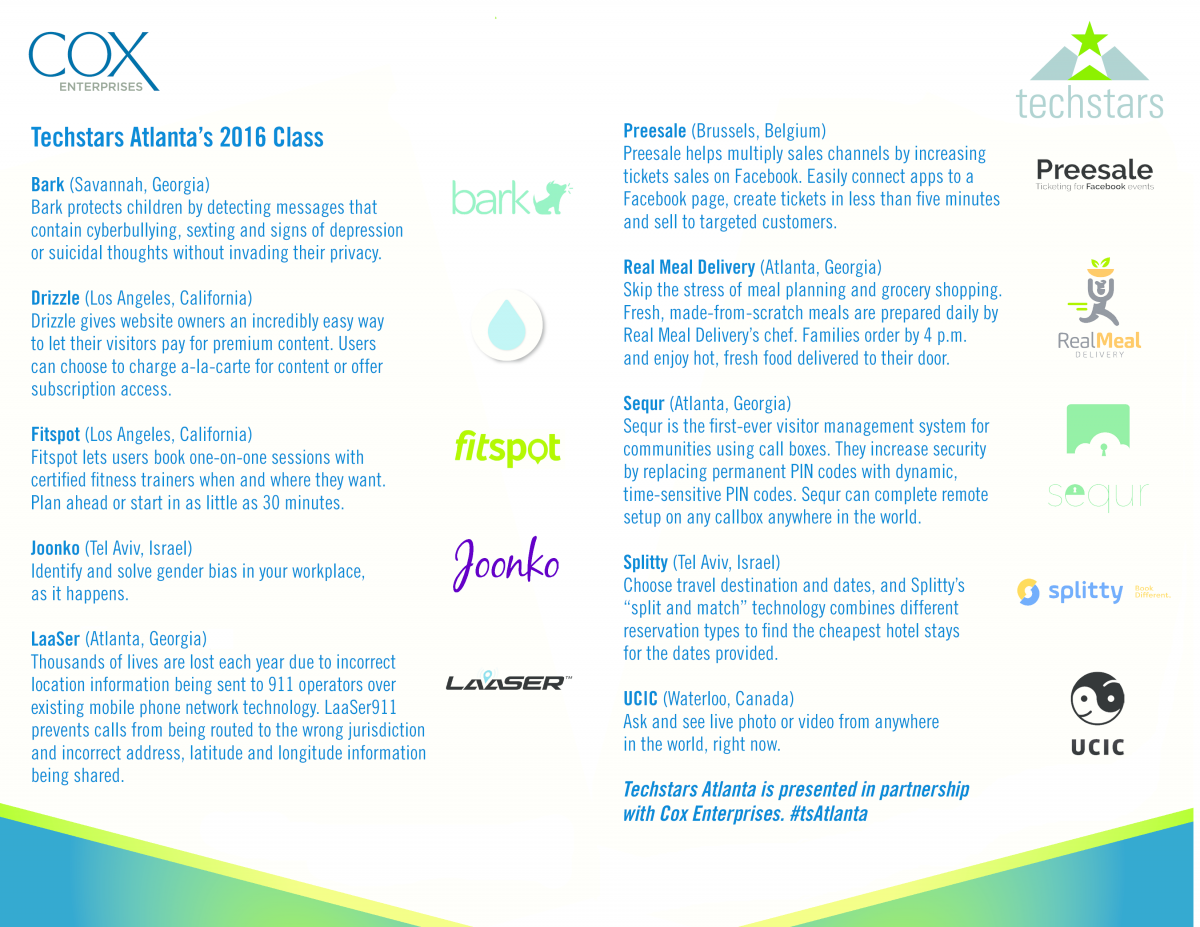 Like their geography, the Techstars Atlanta Class of 2016 is all over the map when it comes to industry and business model. You’ve got your “Uber fors” in Fitspot (Uber for Personal Trainers) and Real Meal Delivery (Uber for Fresh Meal Delivery); small business B2B with Drizzle and Preesale; crowdsourced intel with UCIC; enterprise management and compliance with Joonko and Sequr; data-backed consumer shopping with Splitty; and even public services/personal security with LaaSer and Bark.

It’s a veritable buffet of startup delectables gathered and arranged meticulously to make for a 90-day accelerator that will launch these startups into orbit. Not only will they have Cohn and Scriven’s experience to guide them—each have both startup and enterprise successes in their past—but Techstars’ partner, Cox Enterprises is providing on-site mentoring in addition to much of the cash needed to make this program work. A privately-held media conglomerate worth billions, Cox brings its unique business perspective and a long-running commitment to Atlanta’s growth and recognition to the Techstars table.

How To Become A Techstar

Of course, if you’re a startup founder reading this, you probably care less about who got in and more about how they did it. You should know, then, that the application process is tough and the odds aren’t great.

Two submission videos—one of the founders and one of the product/service—were required to get your foot in the door at Techstars Atlanta. Literally thousands of videos were received and reviewed. From those, around 130 startups got video interviews, 70 got a second round, and 40 were presented to a 20+ person feedback team consisting of Cox executives, Techstars gurus, and other Atlanta entrepreneurs and investors. 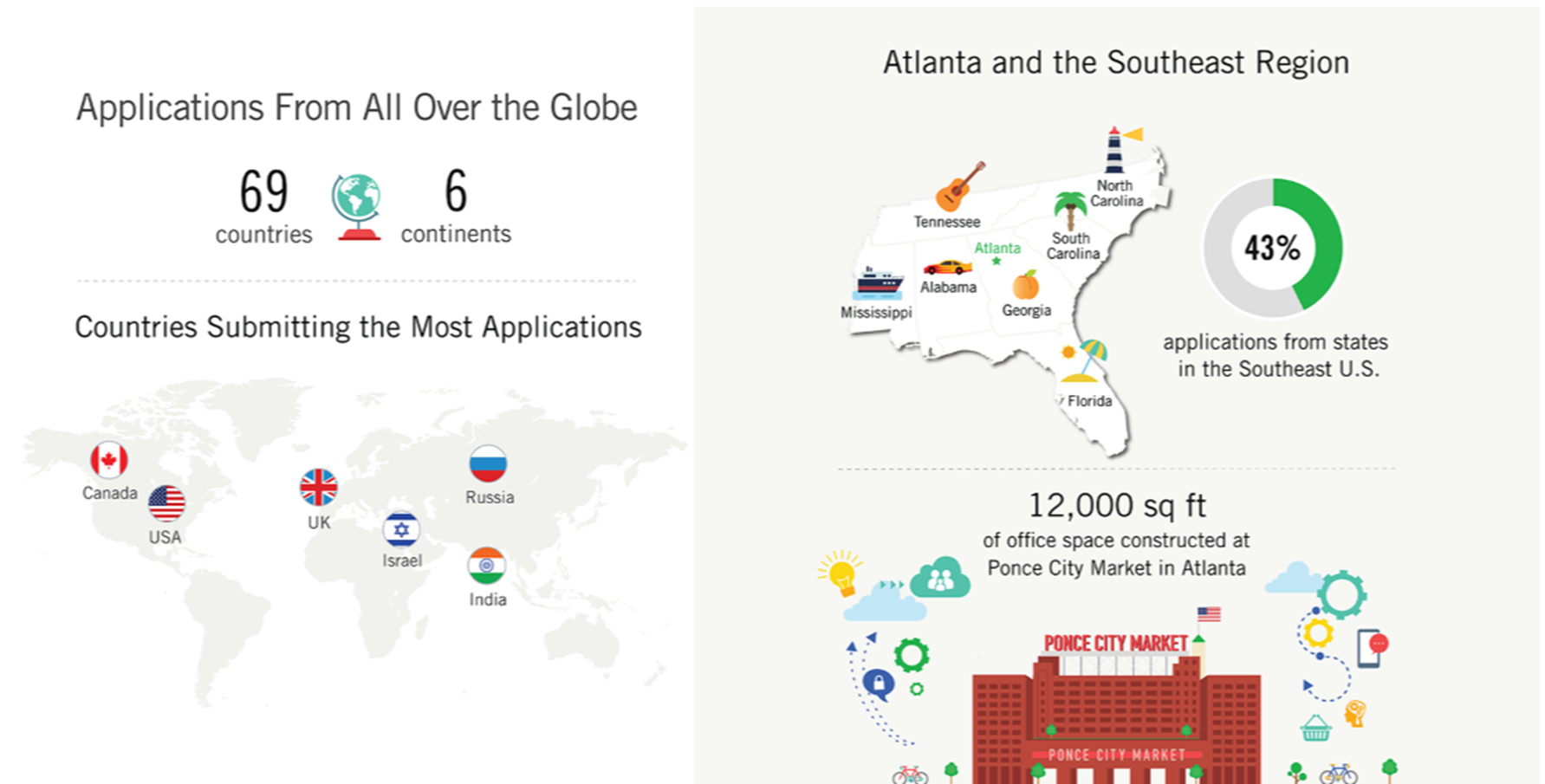 Those 40 then had their pitches picked apart by a room of business leaders, all with the best of intentions but the additional desire to winnow down a promising group to a handful of winners. Half made it through. Cohn and Scriven met the founders from the remaining 20 companies in person before making their final decision. That personal meeting, according to Cohn, is where the rubber meets the road:

“We kind of tease a little bit that there are six criterion at Techstars. The first three are team, team, and team (followed by market, idea, and progress). We flew them in, got to spend some real time with these teams, understand who they were as individuals, what their goals were, and whether or not quite frankly they’re coachable.”

Coachability (and other personal criteria) got Techstars down to its final ten, and every company invited accepted. They’ve all moved in—Techstars offered a hand with the logistics, even helping one international team find a nanny for their children here in Atlanta so the parents can keep busy accelerating—and the program officially kicks off on Monday, August 1st.

We’ll be expecting a lot more from these startups than just whistlin’ Dixie and we’ll keep you updated on the progress as it pours out.