Inductive charging devices have been around for some time. We’ve seen them in electric toothbrushes, mobile phones and other household items. However, with the increasing popularity of electric vehicles (EVs), governments are taking a closer look at their road infrastructures and determining the viability of using this tech to charge cars as they pass by. Recent reports have revealed the UK has ponied up nearly $800 million to build roads that charge EVs. If successful, it could overturn two of the biggest drawbacks of electric vehicles, their limited range and the time it takes to charge them.

How will it work? 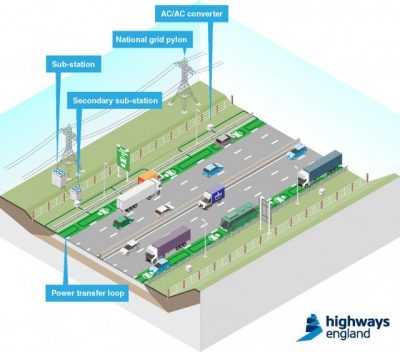 The trial will last about 18 months and be held on private roads to test its viability.

Inductive charging is accomplished by generating a varying electromagnetic field in one device that is received by another device through an inductive coupling. That device is then able to use this energy to charge its batteries. In other words, the two devices don’t need to be physically connected provided they are close enough for the electromagnetic field to reach the device that needs charging. This is relatively straightforward for something stationary like the Sonicare toothbrush, which comes with a charging glass to place it in after each use. However, applications for something that’s moving can present a whole new set of challenges.

The UK has already used something similar to run public transportation in certain areas. The new initiative is expected to use cables buried beneath the road to generate the electromagnetic field. Since the cars traveling above it will be moving at high velocity and only some of them being EVs, a communication system is being considered between the system and the car to trigger the process and prevent waste. The project will likely begin in 2016 and the first trials will be held on private roads to test its viability.

Impact on the EV Market

If the technology proves viable, it would certainly alleviate some of the range paranoia currently affecting the electric vehicle market. When an EV is running low on charge, the operator could just slide over to the specially prepared lane and pick up a little extra juice to make it to the next charging station. As the technology may not be sufficient to replace all of the energy the EV is expending as it travels, it’s crucial that governments continue to develop their charging station infrastructure as well. Combined with continued improvements in battery technology, EVs could see a big boost in sales in the future.