It’s no secret that cell phones are used for way more than just talking, texting and browsing the Internet. Many people use smartphones for almost almost everything they wish to accomplish with their desktop or laptop. That being the case, having a sizable keyboard can come in pretty handy–but not if you have to actually carry around a keyboard. The next best (or even better maybe) thing? A virtual keyboard that is also a virtual piano, all within one tiny box that shines some red light.

Serafim’s iKeybo is a virtual projection keyboard and piano that activates on any flat surface, and can be used on any device with Bluetooth connectivity or USB. Once you press the ON button, the laser keyboard automatically appears. The device was also designed to serve as a cell phone holder, which transforms your smartphone into something of a computer monitor. 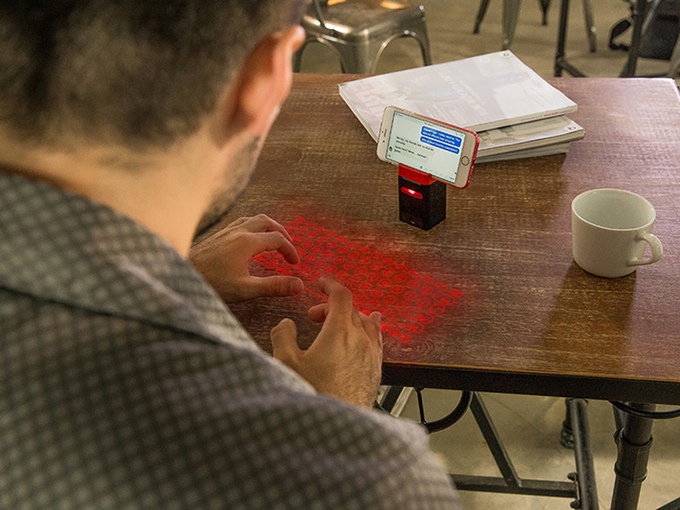 The keyboard also has multilingual capabilities and can be used in four different languages (Arabic, Chinese, Spanish, English). iKeybo was designed with circular keys rather than the squared keys you usually see on most keyboards; the hope here is to make table typing (or whatever surface you choose) faster and more accurate.

IKeybo can also be used as a portable charger to plug in your smart gadgets. On a full-charge, the battery can support ten hours of continuous use, and the device also comes equipped with energy-saving modes to help sustain to extent usage.

Was there something else? Oh right. The piano. To activate the laser piano, users need to download iKeybo’s music app – once you tap the app, the virtual studio functions will appear. It starts as a regular keyboard (which you can double and triple up for additional octaves) but using the configuration options in the app, you also have access to over four other instruments (e.g., drum machine). 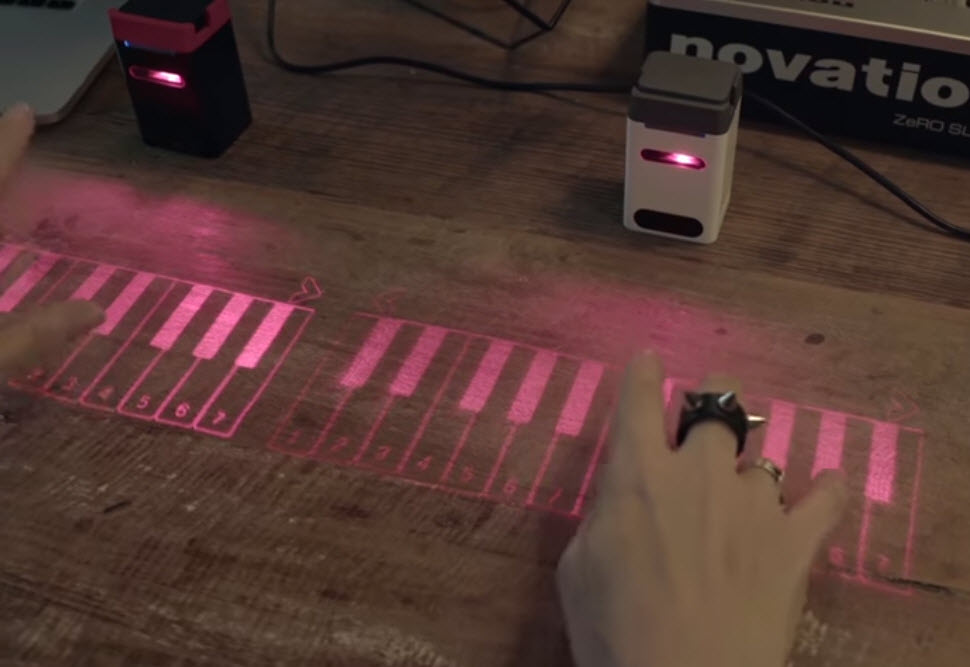 Companies such as Celluon have created products similar to iKeybo, but with slightly different features. Celluon’s Epic device also offers a laser keyboard and is smaller than iKeybo, but does not work as a cell phone holder so user still need to find ways to balance and view their device while operating the keyboard. Also, the device does not include a virtual piano.

Another alternate product is Tap Strap, a plastic wearable that is placed on your fingers (sort of like brass knuckles) and by tapping your fingers on any surface–even your head or bike handles–you are able to type out messages. The tough part though, is that there is no virtual keyboard to look at, and technically only five fingers to use, so the user needs to learn how to type specifically with Tap Strap in order to access all the available keys of a standard keyboard. That might seem like too much work for a lot of people.

And again, it doesn’t let you play Moonlight Sonata at Starbucks.