Slack has taken over the business world. Named Inc.com’s 2015 Company of the Year, the communication platform has 1.7 million users only 20 months after launching, and it continues to grow – with minimal advertising. Ninety-seven percent of new customers are referrals.

The platform, which is built for collaboration and discussion with its “channels”, has also begun expanding into people’s personal lives, used as a forum for discussions on topics from game design to pet ownership. Slack doesn’t list these channels on its own site, but the website Slack Chats acts as a library for public Slack channels, some of which users must pay to access.

I only heard about Slack a few weeks ago, despite the fact that it launched in February 2014 and obviously has been spreading like wildfire. The reason: college students haven’t adopted it yet. That’s strange to me.

Given the number of group projects I do in a semester, academia seems like a prime setting for a product that specializes in group communication. Even just having it for personal use between groups of friends seems like a great way to have a single space to communicate on an Internet browser, a desktop app and a mobile app. Slack has everything college students already use, and more – emojis, attaching files and replying with GIFs, plus replying to specific messages in groups and creating multiple discussions for different topics in the same team. 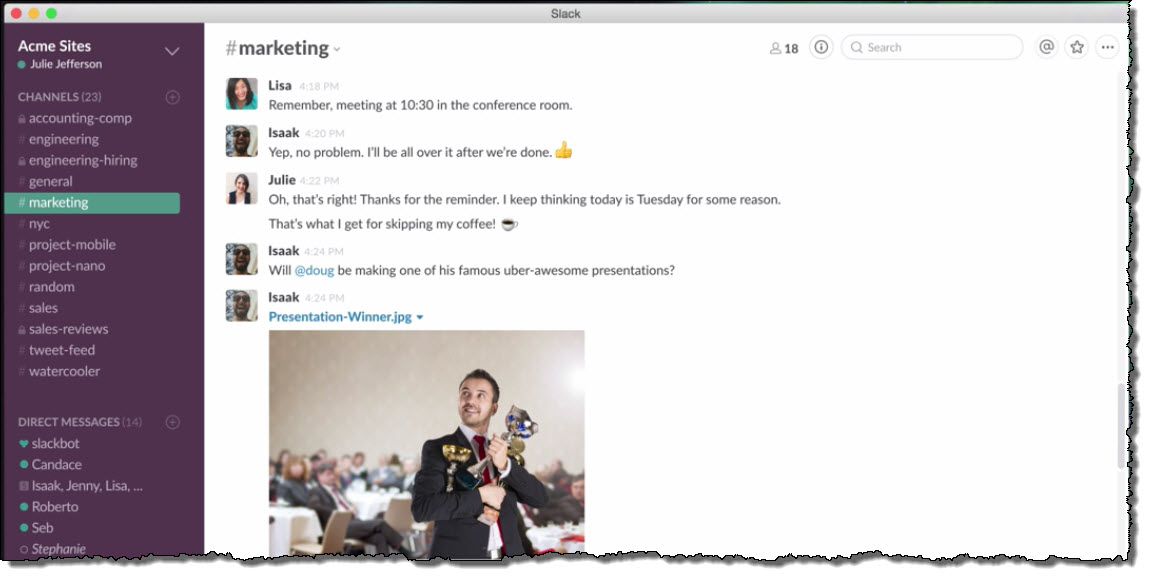 However, the majority of college students I talked to didn’t know what Slack even was. The few that I found had only used it for internships and hadn’t ever thought of using it within the education context.

“I guess it’s good if you’re in a business where constant communication is necessary,” one person said. But then noted that group messaging is already “just too easy.”

Another student with whom I spoke said Slack is “just a glorified AIM or Facebook chat that’s all in the same window.” They also said it “holds your hand” too much, giving users unnecessary tips and prompts.

To be fair, Slack doesn’t need college students – the startup is doing fine without them, and will continue to soar with or without the 18-22 year old demographic. But it just seems like such a huge opportunity on the path towards conquering the world of ongoing organized communication.

The way I see it, though, Slack will never be something a significant number of college students use for school or for fun or with their friends. There are already other, more efficient ways to communicate. For college students, they already have texting, Facebook messaging, Snapchat, Kik and GroupMe, among countless others. They don’t need one more way to communicate – what they need is WUPHF.com.

What I suspect might happen, if anything, is that professors and teachers will get wind of Slack and try using it for their classes and course material – sort of like a slicker Wiki. It actually wouldn’t surprise me to see Slack create an education version of the software for such purposes. Like any other thing imposed upon students by their profs though, I don’t see many of us being too excited about it. Why this isn’t reflective of a broader corporate sentiment, I’m not sure. I guess I’ll find out in a few years…