Last year, friends Ido Bar-El and Or Rapaport spent 6 solid months in Israel designing and building out a piece of technology that, upon inception, was intended to simply be a cheeky, interactive statement about dating apps. What started as a playful remark, however, turned into an exceptionally unique, full-featured entrance into the exploding world of self-glamorization and the flagrant demand for attention from and inclusion in the online class of people considered “hot”. Or as some call it, “social media and online dating.”

Towards the end of the year, they launched In Your League for iOS. Through an ongoing flow of “Tell us who you think is hotter” selections (between two people at a time), the application used an algorithm to generate scores for users out of 10 and show them where they ranked among their social peers. In other words, based on their chosen Facebook photos, users were offered the opportunity to see what others thought of their looks and find out, by way of cold hard numbers, who was “in their league”. If they were in someone’s league, they could message them. And people liked it. 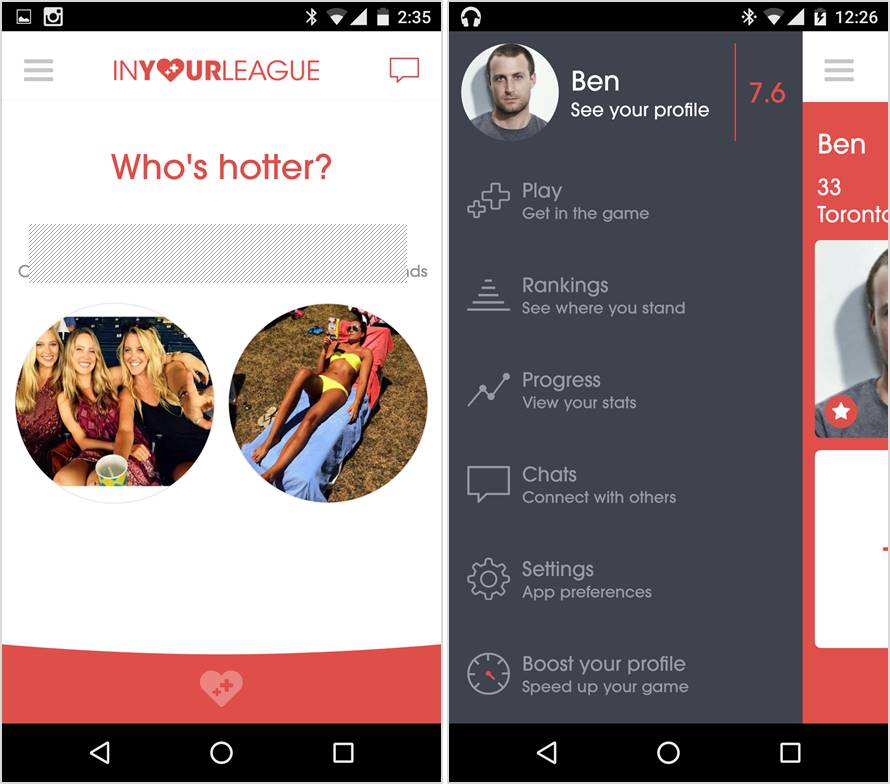 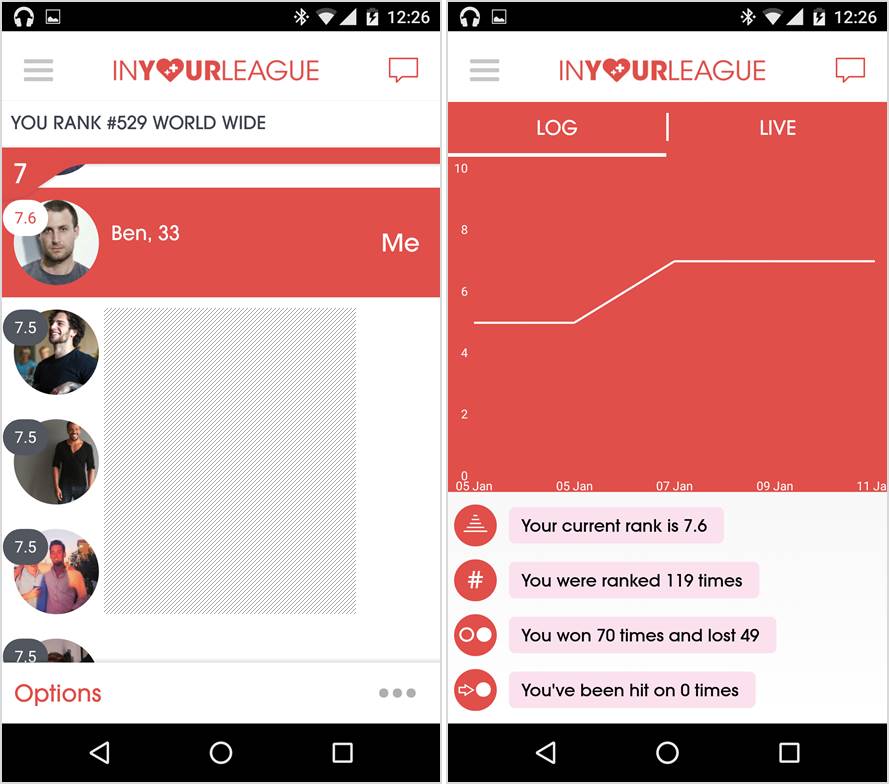 “People were actually enjoying the competition element,” Or told me. “And because they could track their score over time, they also really liked having an idea of which photos they looked best in. We were the only app bubbling up the feedback that let them say to themselves, “Ok, I look like a 7.8 in that photo, but an 8.4 in that one – I should use that second one for my Tinder profile.”

“When guys use Tinder, they always have two big questions on their minds,” Ido added. “‘Am I in her league?’, and “What do the other guys look like to my left and my right?’ You get both answers in our app, and you see both the guys and the girls to your left and right. A lot of people find that information very useful, and we were the only ones being honest enough to give it.”

The app was quickly becoming popular. Within only a few days they had almost 3,000 global users who had made just fewer than 1 million collective “selections” in the app. Then, before the two young men could pop a bottle of champagne to celebrate their new business and their new year, Apple kicked them off the app store.

Despite numerous inquiries, objections and appeals, and despite frictionless acceptance into the Google Play Store, Apple wouldn’t and will not budge. According to The GestAppo (too much?), In Your League was in conflict with Section 14.1 – titled, “Personal Attacks” – of the App Store Review Guidelines:

Ido is nothing short of flabbergasted. “It’s the same storm of PC bullshit that we’re seeing everywhere else, but now with apps? You can’t bring that culture so heavily into the app and online world. It’s mind-blowing. The only scrutiny in a case like this should be the scrutiny made by the users.”

He added, “If you don’t want to get offended, don’t download the app and don’t use it. You know what you’re getting into. Don’t get me wrong, we can see how people might be offended by the experience – just as they would be with Tinder or any other app where you’re essentially getting graded. And again, we understand that we took it a step further than others, but still, a lot of people liked it because it was sincere and honest.”

“We’ve been getting a lot of emails from people asking where the app is,” said Or. “We have no words. So much of the digital world is how you present yourself physically – we were offering a way for people to measure that and encourage them to always strive for a higher level. They want that. But we’re not allowed to provide it.”

Because of the ban, the two are struggling to find financing.

“We’ve been turned down by investors simply because we’re not in the app store. From the perspective of our business and our livelihood, it’s a fatal censorship.”

And as far as I’m concerned, it’s a totally irrational, misapplied bullshit censorship. First, consider other apps that are apparently within the rules.

Do you remember when I wrote about The League? The app was dubbed “Tinder for Elites”; it has a waiting list of over 100,000, investor funding of over $2 million, and its entire value proposition is that users will only ever rub thumbs with the cream of the crop (whatever that means) because anyone who is not deemed worthy by the app’s assessment algorithm is denied access to the community.

They’re not even giving people constructive feedback and offering a set of alternatives – they’re just telling losers to fuck off.

Blinq just launched on iTunes. Blinq is a dating app out of Switzerland that allows people who match to see their proximity to one another – including if they’re at the same bar at the same time – and encourages them to meet in person. You know what else it allows people to do? It allows them to use the app’s facial analysis software to plot their physical appearance on a hot scale that ranges from “Hmmm…” to “Godlike”. Instead of crowdsourcing the evaluation, they use “science” developed at the University of Zurich. So it’s like, scientific, so like, that makes it like, totally better… 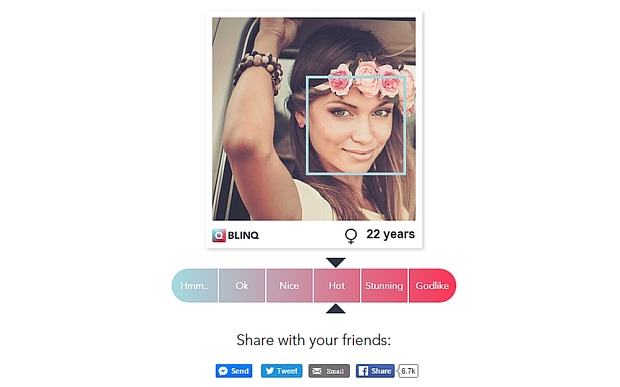 And guess what the next big surprise is: behind the scenes, Tinder does this too. In a recent article, it was uncovered (confirmed by CEO, Sean Rad) that Tinder calculates a user’s “desirability”, assigning them what is referred to internally as an “Elo Score” – that’s what the chess community uses to assign values to player skill levels. Tinder then uses the Elo Score – which is based on an algorithm that required more than two months of work – to facilitate better matches. In other words, if a lot of people swipe right on you (that means they think you’re hot), Tinder is going to first try to match you up with other people on whom a lot of people also swiped right.

And that makes perfect sense. It’s not insulting, it’s not mean-spirited, it’s not inappropriately cosmetic – it’s efficient and it’s realistic. It’s life. Not only is it life, but it’s the part of life that everyone already knows – or at least ought to know – is famous for its high probability of rejection and obtaining much much less than a perfect score.

Chris Hemsworth is about a 10. So are David Bekham and Brad Pitt circa 2004. The users of In Your League currently have me pegged as a 7.6. Not only does that feel about right, but looking at the numbers (I have a Win-Loss record of 70-49) and considering the fact that the numbers are derived from the deliberate actions of real people, I’m comfortable saying that is right.

What’s so frustrating is that because I’m in tune with reality – a level of consciousness for which everyone should be held responsible – I didn’t need an app to tell me that Angelina Jolie and Jennifer Aniston would never fuck me. I accepted that a while ago, right around the same time nobody ever in history asked me to be an underwear model.

You know what I haven’t even told you about In Your League yet? That nobody can be lower than a 5.0 and that if a user wishes, they can have their score and rank hidden from the rest of the community, making it entirely a private feedback mechanism. If the founders really wanted to be assholes by way of unfettered honesty, I could quickly point them to an army of 2s I just swiped through in their app.

Think I’m being a shallow, insensitive prick? Fine. I disagree, but even if you’re right, does that mean that people “like me” aren’t allowed to have their own app?

We’ve already let this empathy overdrive get its soggy fingers all up in our education ecosystems (elementary schools replacing letter grades with words and phrases like “evident” and “support required”), our corporate ecosystems (avoidance of comparative assessments outside of Sales Departments and prohibition of terms like, “fired”), and our competition ecosystems (youth sports leagues giving out medals to kids just for remembering to wear a shirt). Do we really need this degree of policing in the corners of our software ecosystems where the feedback users get has been explicitly requested?

Are we turning into such pussies that when adults of sound mind walk into a room and ask, “Does anyone want to have sex with me?”, our new goal is to strip them of their entitlement to an honest fucking answer??

You might be thinking, “But Ben, you don’t know what it’s like to be called ‘a 2’ – these kinds of experiences cause real damage to people.” I agree whole-heartedly. And thus, the beauty of the fenced, hyper-focused application model, where only those who willingly engage in a very particular type of experience are exposed to the negative repercussions of that experience and the community that surrounds it. 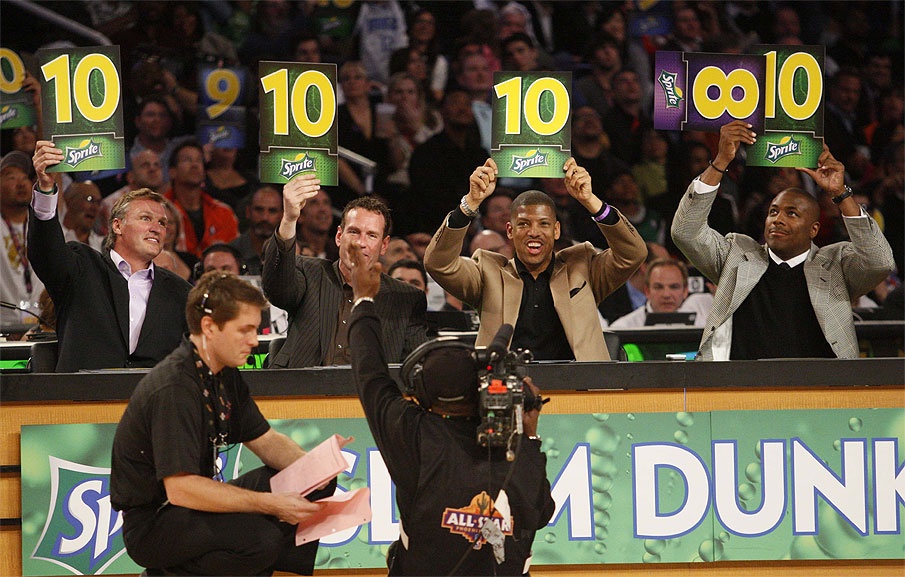 These guys aren’t going door-to-door with a bunch of those bright yellow Sprite NBA Dunk Competition score cards and unsuspectingly throwing up 4s and 6s in people’s faces while they’re fighting a stomach flu. They’re just offering an app to people who want to know roughly where they stand on the physical spectrum, who want to experiment with their photos, and who want to interact with other people of a similar mindset.

It’s not even a preposterous mindset. It’s the prevailing mindset of today’s digital world, and as offensive and misguided as some manager or committee may find it, Apple is swinging from the crazy tree if they don’t think this sets a very dangerous, very confusing and very counterproductive precedent. What’s next? Are they going to ban one-star reviews on Yelp and people asking “Do I look fat in this” over What’s App?

Shiiiiiit. Of all companies, Apple is telling people they’re not allowed to be a little superficial…

You can download In Your League from the Google Play Store.