Google–or Alphabet, to be more accurate (it’s hard to get used to that)–is putting Toronto’s eastern waterfront on a fast track to the future. The tech behemoth has announced an initiative as part of which it will transform a 12-acre region of the city into a futuristic smart neighbourhood and large-scale open-air lab experiment.

The project is being helmed by Sidewalk Labs, an Alphabet subsidiary. Sidewalk Labs is an operation that is finding ways to accelerate urban innovation by running pilot projects that can serve as prototypes for more such enlightened municipalities across the world. Sidewalk Toronto is the first such pilot, for which they’ve partnered with government agency Waterfront Toronto.

The $1 billion dollar project aims to transform the physical and digital infrastructure of the neighbourhood of Quayside. Sidewalk Labs will use a combination of technological innovation and community engagement to create what they hope will become a model neighbourhood. The company’s solutions span infrastructure development, energy production, waste management, and more. Here’s a look at some of the notable advancements set to be introduced in Quayside over the next few years.

A Digital Layer with “Neighbourhood APIs”

In Sidewalk Labs’ own words, they’re “building a neighbourhood from the internet up.” What that means is that the physical components that would traditionally constitute a neighbourhood are going to be connected, monitored, and governed by an underlying digital layer. This digital layer will be used to create a programmable interface opened out to designers through APIs, effectively turning this part of Toronto into a (regulated) canvas for software developers. This might just make Quayside the first neighbourhood that gives software developers almost as much power as real estate developers in civic and municipal matters.

The idea that buildings need to be constructed for a singular purpose is so 2016. Most structures are built to last longer than a community requires them to serve their purpose. This results in cities that become crowded with obsolete structures that take a lot of work to revamp.

Sidewalk Labs’ solution to the problem is something they call Loft–buildings with versatile cores and adaptable shells. Structures won’t be assigned one purpose for their entire lifecycle, but will be modified rapidly to fit the changing needs of the community. Quayside could see a parking lot become a makerspace, or a business district become a residential area a lot faster than that would happen elsewhere.

It’s fairly evident by now that vehicular emissions are a major reason the ice caps are melting and we’re all going to die in a flood, so private car ownership is something the city planners at Sidewalk Labs want to deter. They plan on going so far as to allocating limited parking areas and making shared ride services easily accessible to realize their goal of a car-free neighbourhood. 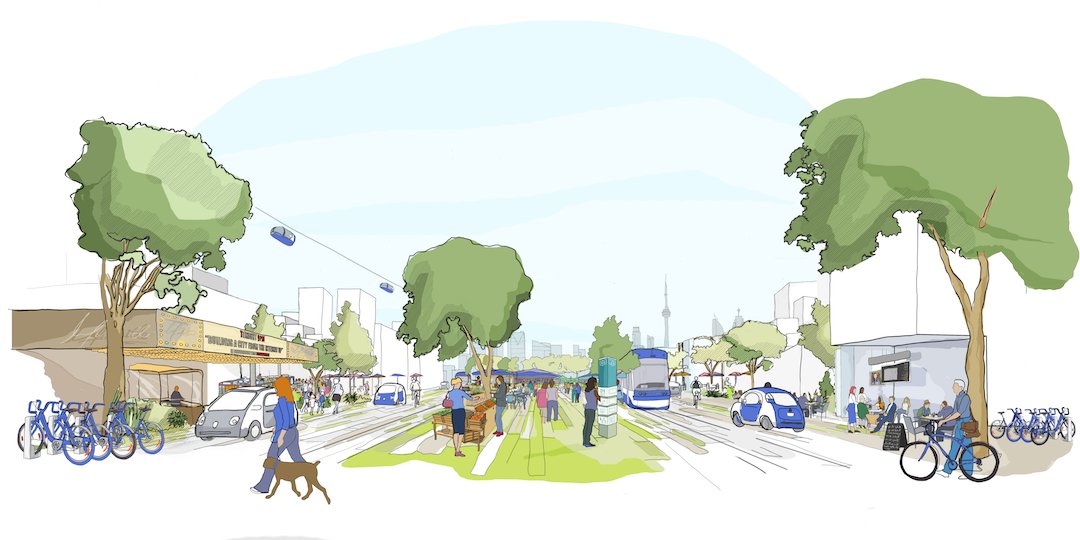 There will be a focus on innovation in the mobility sector, including experimenting with self-driving taxibots, vanbots, and buses. Sidewalk Labs will partner with Waymo to deploy the fleet of autonomous vehicles that will form the backbone of Quayside’s futuristic public transport system. There are also plans to pilot a personal aerial transit system, which could take the form of self-driving pods, cable-based systems, or dispatchable gondolas.

We’re used to gaining access to online resources through accounts, but the residents of Quayside will have a lot more linked to their digital identities. Sidewalks Labs plans on establishing a secure portal that will mediate access to the facilities that form the neighbourhood’s physical environment. Residents will be given access to the various amenities and services via this account. It will also be used to grant access to homes in certain situations, such as when someone needs to allow a maintenance worker entry into their home remotely or the fire department requires emergency access into an apartment. The Account feature will also facilitate communication between neighbors, as well as between residents and the municipal authorities.