I love food, I love innovation, I love technology, and usually, I love the marriage of all three. It is a union that has brought us such wonders as molecular gastronomy, Oreo ice cream, olive bread, and enormous vibrators that look like charred zucchinis. As with everything, unfortunately, idiots get carried away and spoil it for the rest of us. Like when some of them decided to make, bake, manufacture and sell these preposterous food flavors and snacks…

Apparently, Cheerwine is a cherry-flavored soft drink with sales fairly contained to the Southern US states (it does sound like something you’d bootleg down the I-55 on your way to a hootenanny). Krispy Kreme is a doughnut brand that is near and dear to the hearts (literally) of many obese Americans, and this UK couple who are incorporating the café into their wedding day because they met there.

In an attempt to quietly exterminate all the remaining diabetics, this co-branded combination of the two was released just this summer, somewhat reminiscent of the Lester’s Fixins soda line that includes flavors like, Bacon, Buffalo Wing and fucking Ranch Dressing. According to some who had never had Cheerwine before, this marketing experiment is not all that bad. According to some others who are more familiar with the drink, it’s shit. Either way, it scares me. Birthday cake ice cream should have been the end of the Junk Food Flavors That Taste Like More Junk Food Flavors initiative. Now I have to worry if my future children will end up crawling the floors of liquor stores looking for Vodka-Infused Twinkie-Flavored Cheese Puffs. 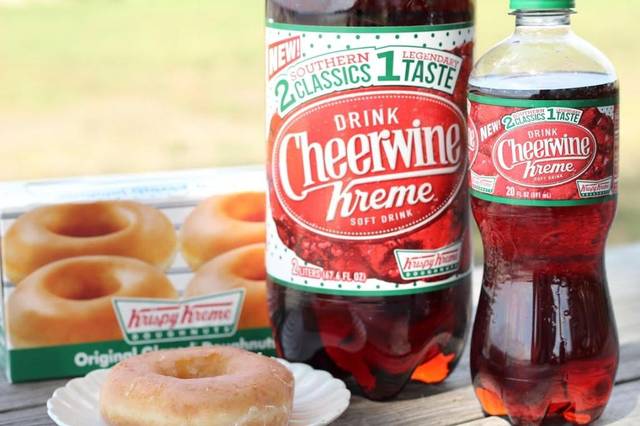 The cronut started in Soho’s Dominque Ansel Bakery as the modest fuckchild of a doughnut and a croissant. Then some psychotic Canadian company called EPIC Burgers and Waffles, who launched the snack at the 2103 Canadian National Exhibition (it’s essentially an elaborate 3-week carnival, just without the incest), decided to throw a beef burger patty between two doughnut-croissants, cover the patty in cheese, and then top the whole thing with maple-bacon jam. This makes the KFC Double Down look like Gwyneth Paltrow’s breakfast smoothie.

The result? About 150 people reported illness after consuming the thing. Apparently the maple-bacon jelly was contaminated / possessed. Good. That’s what you get when you eat something that looks like a diarrhetic bear wiped its ass with burnt flawn. 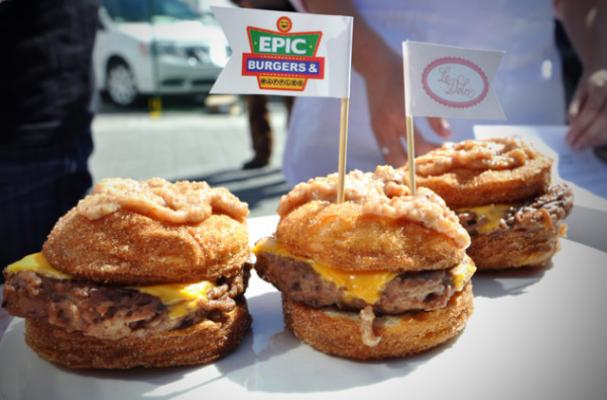 Every year, there is a massive animal torture party in Calgary, Alberta called The Calgary Stampede—it’s half carnival, half rodeo, and to be fair (Max Pun Score Achieved), it’s all a lot of fun. Beyond the bucking though, it’s also pretty deadly; every year they create, collect and line up vendors to sell a massive menu of crazy-ass foods. This particular concoction (and a few more to come) was a member of the 2016 roster; it’s little sugary doughnuts covered in gravy and cheese curds, then topped with jalapeño peppers.

Why people continue to fuck with a good thing and force infinite permutations of Salty & Sweet down our throats, I’ll never know. Fried Chicken & Waffles? Sure. Let me also grab the Lobster & Pancakes sprinkled with some mouth-watering pickled M&Ms. Jesus. I’m a huge fan of both Al Pacino and blow jobs, but that doesn’t mean it’s a good idea for me to mix them (though the “HOO-AHH”s would be epic). 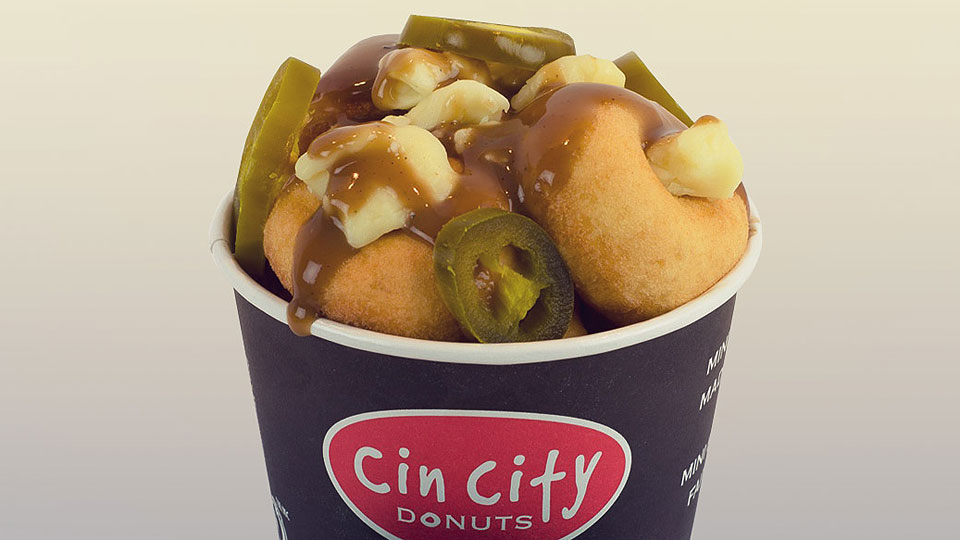 At least with junk food that tastes like other junk food, there’s a reduction in deception and thus a clear call for natural selection; everyone knows you have chosen to chew death. With these kinds of things though, I can’t help but feel like they’re playing with our minds as much as they are with our taste buds—though I will admit that fruit and fondue is fucking delicious. Either way, the day I eat a grilled cheese sandwich inspired by Rosie O’Donnell sitting on a gumball machine is the day I trade in my gym membership for a kidney stone that looks like Mount Rushmore. 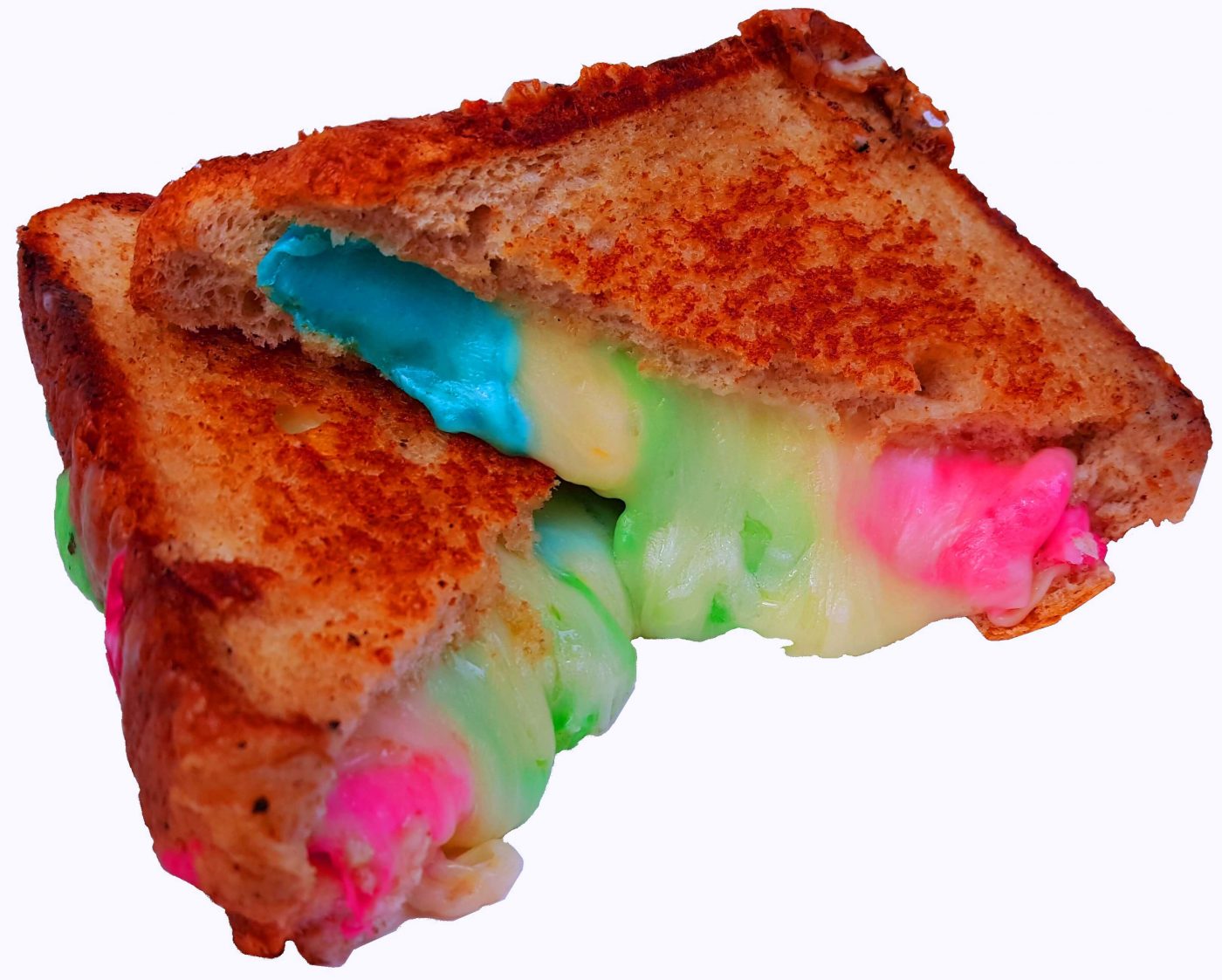 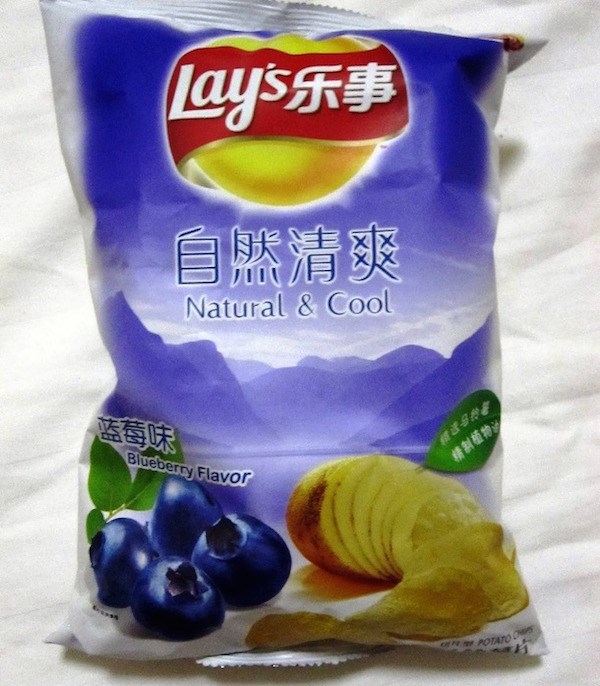 Listen, I get the sustainability incentives to replace existing ingredients with insects—like that company who is using cricket flour in their protein bars. But this?? Read this description:

“…deep fried little dough balls…cooked to golden perfection and then tossed in cinnamon and sugar. Our own old fashioned, homemade toffee sauce covers the balls before they are topped with finely chopped medjool dates, taking mini donuts to a gourmet level. They’re then served in a canoe with fresh whipped cream and sprinkled with meal worms and crickets.”

So they just took a normal dessert, dropped it in a swamp, and then dared you to eat it. Great call. I can’t wait for them to launch their earwig parmesan. 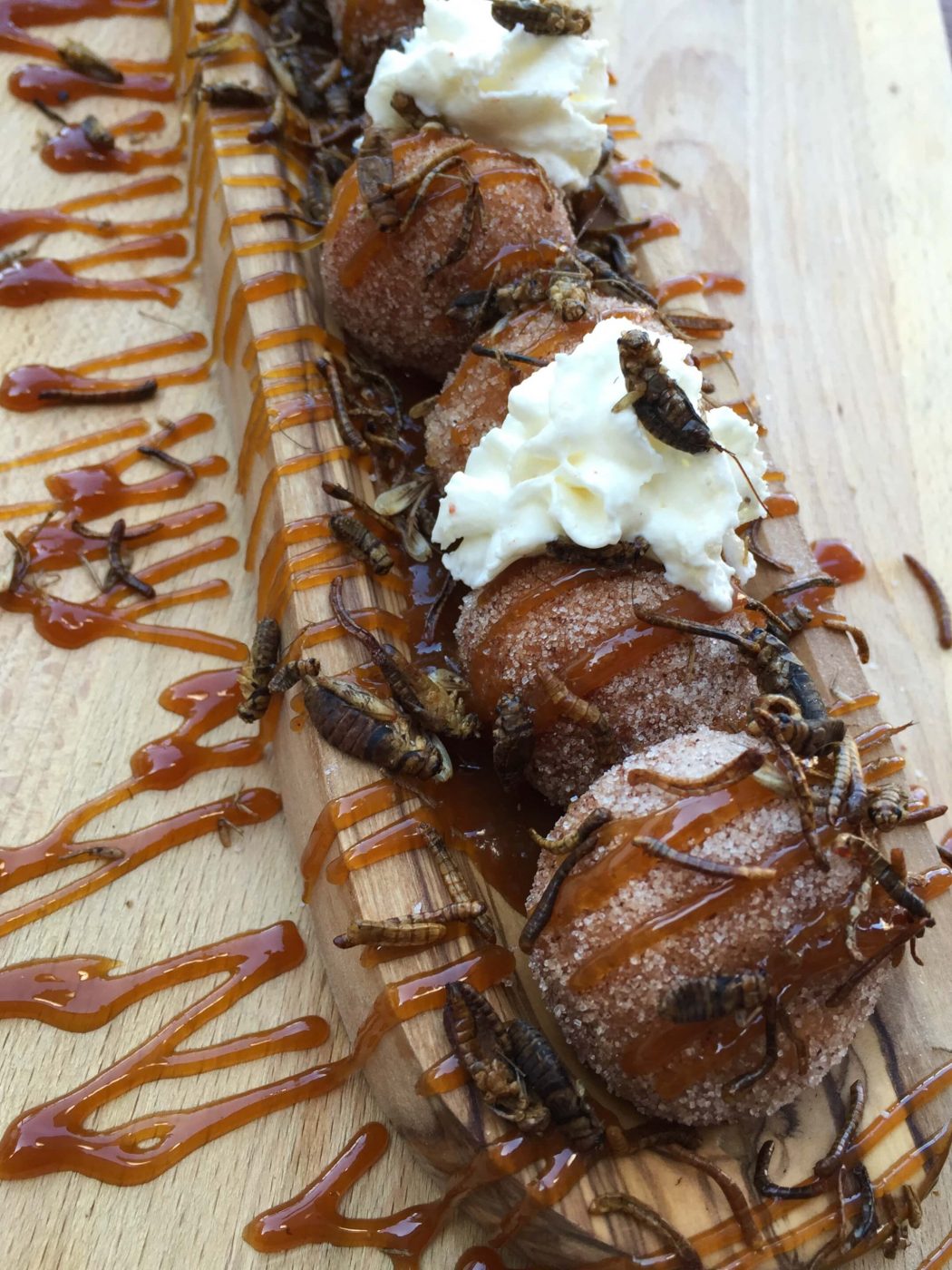 See, this is what happens when you let people run amuck with wild hybrids like Salty-Sweet, Horrible-Healthy and Dessert-Dumpster; eventually, someone tries to quench your thirst with carbohydrates. I’m surprised more people don’t put Mountain Dew on their bagels. And who the fuck approved that color for the pizza one?!  Good luck selling a pepperoni-flavored tub o’ mucus in the middle of August. 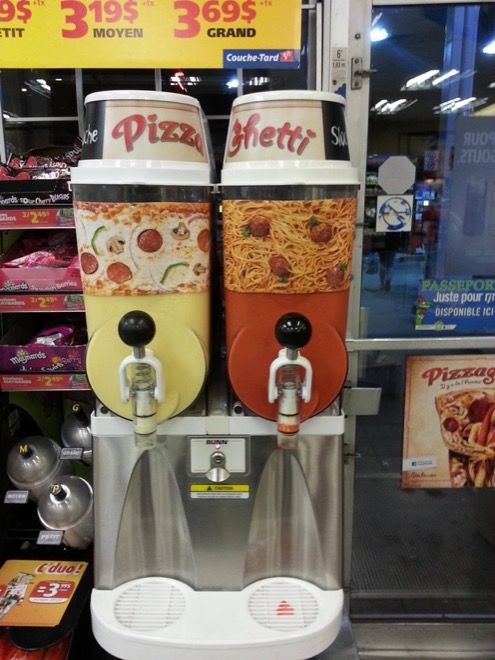 Nooooooo, they came up with this in SCOTLAND?!? I was going to guess West Hollywood. Do you think they had a focus group to help them decide on the Ridge Cut? 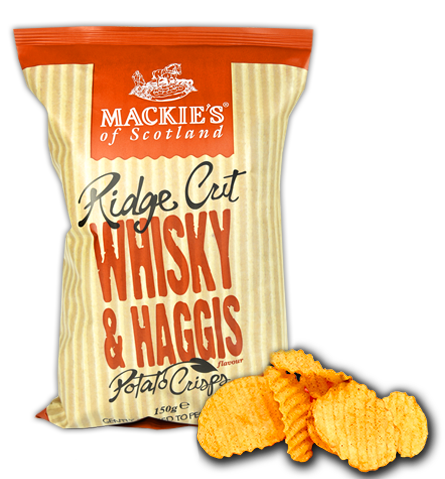 Inspired by the movie, Blade, the Swiss sadists who manufacture this garlic drink (yes, they’re actually called, LaObamas) describe it as “a refreshing special garlic drink absolutely free of garlic smell.” Do you think they’re using the word, “special” the way I think they’re using it? These guys got the wrong idea when they looked at the sales numbers for Ginger Ale. 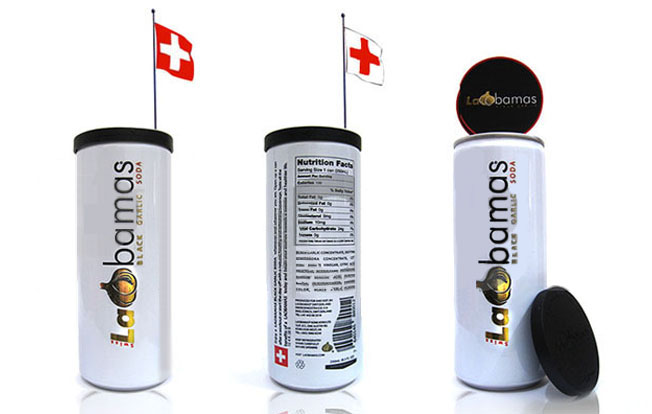 Don’t get me wrong; I’m all for eating obscure-ish meats. I’ve had horse carpaccio a few times and horse is my third favorite charcuterie board accessory, behind only Chihuahua and Eastern European Orphan. Here’s the thing though: THE ONLY PEOPLE WHO ACTUALLY GO TO HELL ARE RACISTS, RAPISTS, PEDOPHILES AND PEOPLE WHO FUCK WITH ICE CREAM. I can turn the other cheek with some of these dumbshit hipster flavors like Burnt Toffee, Avocado and Tapered Denim, but be warned Japan: you keep making the greatest food in the universe taste like dead, uncooked animals, and I’m going to open a chain of diners that serve Sashimi Milkshakes. Don’t you fucking test me. 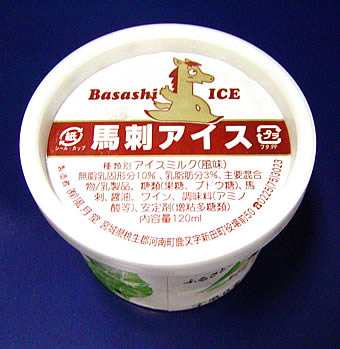