2016 was a big year for YouTube—with the splintering of the site into YouTube Red, Gaming, and Music, as well as the high-profile complaints about dwindling view, counts. The saga isn’t finished, though: it’s been 2017 for less than a month, and YouTube has extended an olive branch with an updated version of their live chat “tip jar” called “Super Chat.” It’s yet another way for contributors to monetize their content, and it’s a strategic play by YouTube to claim more of the growing audience for Live content.

Now if you aren’t confused by the various monetization strategies on YouTube, you probably aren’t paying close enough attention. Since YouTube first started selling ads in 2006, the lion’s share of profits has come from direct video advertisements embedded in videos. Contributors like PewDiePie make at least 15 million a year from these ads, more than enough to justify a “living.” But more recently, content contributors have moved onto other streaming platforms like Twitch that allow for direct sponsorship from fans. 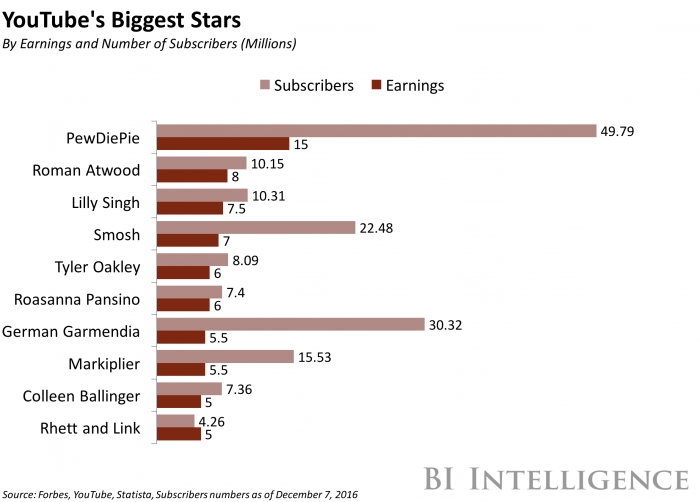 I worked with one full-time YouTube Gamer who goes by OMGitsfirefoxx. She pulls in thousands through direct contributions on Twitch. It’s called “cheering,” and plenty of loyal fans put their money where their mouth is. YouTube’s Super Chat is a direct knockoff, with the added benefit that your comment is given privileged real estate on the chat log for up to 5 minutes. This is really useful if you actually want to get a message across, since most YouTube Live contributors have comments pouring in like Matrix code, too fast for human eyes to decipher.

The bottom line is Super Chat could help fans connect to their idols, and that connection is what streaming has long been built on, but it’s not a great sign that in my time investigating individual YouTube Live contributors, I didn’t see any organic Super Chats. That either says something about the viability of the Super Chat or my dedication as a reporter. Either way, not good for you, Dear Reader.

According to Google/YouTube/Alphabet’s press release, it’s not available for iOS yet, only Android, which explains why I couldn’t find it in my iPhone’s YouTube app.

When I tried to find it online, I had to follow a link to YouTube Gaming, where a small $ symbol appears in the bottom left-hand corner of the chat screen.

Once I’d found that it was easy to make contributions of $1, $5, or the amount of my choice. I also got the option to customize a message that would appear to the contributor and all the other lowly commenters who can’t afford the good life.

Tipping people while they play Minecraft is the good life.

I still don’t know how to make contributions directly from YouTube, and if it’s that hard for a “journalist” to find, there’s no way it’s garnering as much revenue as it could.

The real money, for YouTubers, seems to still be in advertising and merchandise. I worked for two weeks for a merchandising company hired by Guava Juice, a young YouTube phenom who’s partial to taking baths in sauce for millions of views. He helped develop a cereal box full of cheap toys that sold over 30,000 units almost immediately. The boxes ended up shipping late—it turns out manufacturing requires a very different skill set than video marketing—and a lot of fans turned into sworn enemies. (I know, I had to answer their emails). Everyone made some money, but it caused some collateral damage. For most YouTube startups, ain’t nobody got time for that.

If you’re one of those suckers who still values the pure expression of directly-sponsored video content, the Super Chat is the least compromising revenue stream available. The crowd dictates what is valuable, in real-time. Of course, there’s a possibility that this brings its own censorship, as people race to reach the largest number of viewers by hitting the lowest common denominator. In my research, I didn’t see too much evidence of this, but I can see a situation where YouTube Live quickly adopts a late-night fundraising infomercial vibe: “If you Super Chat 5 dollars with your best idea on what kind of sauce I should bath in next, you’ll get a shout out in my next video!”

I’m an optimist when it comes to these outlets, though, because the lowest common denominator online is often surprising, and dare I say inspiring? Facebook’s most-watched live video in 2016 featured a woman named Candace Payne wearing a simple yet satisfying Chewbacca mask. It was titled “the simple joys of life,” and she wouldn’t have seen a penny of ad revenue or chat-based micro-payments. Facebook just recently announced a revenue share deal for videos that appear in “suggested” viewing on the app. A few partners on Facebook are even getting permanent revenue sharing deals.

If you aren’t a highly productive Facebook Live creator, this money probably won’t trickle down to you, and switching to YouTube from has the benefit of larger viewership and therefore more money, but there aren’t really enough hugely successful live streamers there to make the case.

YouTube is hoping 2017 will be the year that everything changes. The amount of ad revenue for digital video doubled from 2014 to 2015 and has continued to grow at a fever pitch. So the money is definitely there. Right now I’m platform shopping myself. I told my girlfriend I wanted to do a weekly 10-minute long live stream where we freestyle in the shower (link to my youtube). Her response was “we’ll need to buy a new faucet; ours is too loud.” I fell in love all over again, no one is too small to stream! I doubt our video will be Super Chat worthy anytime soon, but it’s certainly a welcome idea and more reason for us to choose a nice anonymous platform like YouTube instead of explaining to friends and family that naked freestyling is a normal thing to do in Los Angeles.