Companies get big by innovating–Kellog’s with its cornflakes, Ford with its assembly line, Top Ramen with their dehydrated noodles. But once companies get big, it can be hard for them to keep the momentum and the creativity. At least so goes the conventional wisdom, for CPG manufacturers and tech companies alike.

Big corporations have big revenue, and the mechanisms in place to keep it coming in. Innovation is inherently risky—more often than not, trying something new leads to failure. And yes, Einstein failed a thousand times trying to invent the lightning rod, or something, but the point is that big corporations already have plenty of failures and a few successes under their belts. They don’t tend to look around for new ways to fail their way to breakthroughs; they’d rather just keep on making money the way that has worked for them for years, maintaining a steady, organic pace of growth.

The problem is, that leaves them vulnerable to changing markets and emerging technologies. While the big, established companies churn out profits the old fashioned way, a dozen (or what seems like a billion) startups are trying and failing and trying again to shake things up. Then one day the shakeup actually happens, and big companies get kinda fucked.

Examples abound. Kodak was one of the most innovative companies in the photography world, but it completely missed the boat on the digital revolution and promptly died. Xerox was first and best in class for business printers and copiers, but they got complacent and their stock shows the result. IBM is still doing pretty well for itself crafting software and IT solutions for other big companies, but after a century as the leading provider of business machines and computers, it completely missed the boat on the personal computing explosion that it helped create. These days, they’re barely in the consumer sector at all.

Barring some risky, shareholder-shedding, statistically improbable leadership, it’s only a matter of time before today’s tech giants start to stumble. Some signs say two of the biggest are on their way down as we speak.

Microsoft and Apple Could Be History’s Next Victims

Just in case you’ve been living under a rock for forty years—or were born sometime in the current millennium—let’s do a rundown. Microsoft came along in the 1970s as one of the first operating system developers. As computers spread, they quickly became the OS leader, and they still maintain the lead when it comes to desktops and laptops (more on that later). Apple started just a few years later as a maker of computers and their own operating system, and remains one of the most profitable companies in the world.

Apple is currently the second largest company by market capitalization. Microsoft is number four. (It’s worth noting here that Alphabet/Google is 3rd and Amazon is 7th—more on that later, too). And though both appear to be at a high point in their trajectories, everybody peaks sometime, and they’re both showing signs of faltering.

For Microsoft, the market’s move to mobile computing might prove to be the company’s death knell a few decades from now. While the wizards of Redmond were busy with an endless stream of Windows variations that nobody really wanted, an overpriced word processor/spreadsheet suite, and a web browser so notoriously shitty they had to rename it—new iterations of the old innovations that made the company great for a couple of generations—consumers were leaving their computers behind in exchange for smartphones. Microsoft’s showing in mobile has been weak, to say the least, and though their Surface tablets seem to be seeing a little more success, it is still best described as tepid. 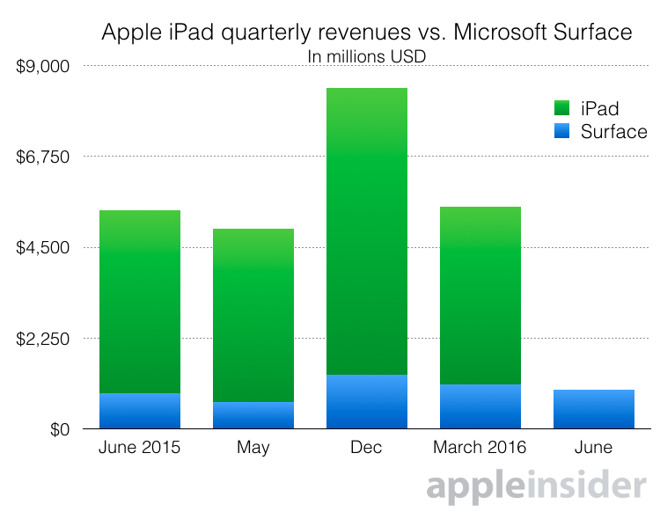 Last year, Microsoft even lost its position as the universe’s favorite operating system. Though it’s still powering the majority of the world’s desktops and laptops, according to the company’s own numbers that only amounts to 400 million machines running Windows 10. Meanwhile, Alphabet-owned Android—which launched the same year Apple released the first iPhone, in 2007—is now on well over a billion mobile devices, trouncing the user numbers for both Microsoft’s Windows 10 Apple’s iOS. 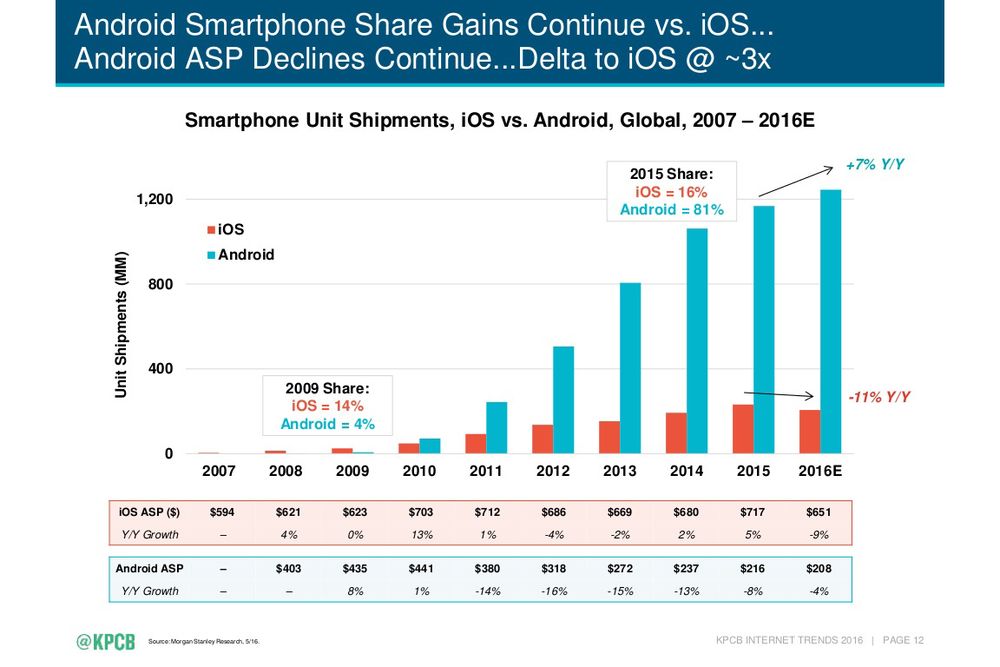 Meaning, of course, that Apple’s position as the cutting edge of consumer tech is also weakening. It has been second to Android in user popularity since 2010, and sales have slowed for each new iPhone generation…largely because there isn’t anything all that new or remarkable to them anymore. Apple is locked into its state of perpetual newness, churning out those profits without any highly evident innovation, and as mobile computers became the standard instead of a premium experience, Apple’s market share rapidly shrunk.

They weren’t even in the top five personal computer makers from 1997 to 2014, either, and 2015 (where Apple was number five) may have been a blip. Again, though Apple keeps churning out new generations of their once-innovative devices, while there hasn’t been anything truly new from the company in years aside from the Apple Watch, which by many accounts is just a smaller and less functional version of the iPhone, and whose sales have been slumping to say the least. Combine that with the fact that Consumer Reports is refusing to recommend the newest MacBook for the first time since the laptop line was introduced—confirming the drop in quality I’ve been griping about for years—and it looks like Apple could be joining Microsoft in handing off the torch to a young bunch of upstarts.

Upstarts who are ready to take the world into the cloud-based, mobile-first, seamless-second-screen experience consumers are clamoring for. Upstarts like…Alphabet and Amazon?

Big, But Ready for More?

So Alphabet (which I really want to keep calling Google) and Amazon aren’t exactly tiny; they’re the third and seventh biggest companies in the world by market cap, respectively, if you’ll recall. And both have revenue models that are solidly in place. Both are also also about half as old as Microsoft and Apple, though, and both are still run by their founders (something Microsoft and Apple had in common during their decades of innovation leadership). Alphabet is already stepping in to fill the void that Microsoft and Apple are leaving, while Amazon is already a step ahead in what’s important.

We’ve already gone over Alphabet’s share of mobile operating systems with its Android OS. Then there’s the fact that Google’s Pixel smartphone (also the name of tablets and laptops made by the company) was released late last year to rave reviews, and laptops running Google’s cloud-focused Chrome OS have been growing in sophistication and gaining market share.

A similarly story can be told when it comes to word processing and spreadsheets. Microsoft’s Word and Excel programs used to be the standard bearers, and their functionality and UIs have been enormously influential in the development of competing products. That being said, my anecdotal experience tells me Microsoft Office is on the way out and Google Docs/Sheets are on the way in (not to mention alternatives like Quip, who was bought by Salesforce last year). Though I can’t find hard user numbers for Google’s products, plenty of Millennials agree with me, and Google’s enablement of easy multi-site collaboration is essential in today’s far-flung freelancing non-space workspaces. Microsoft missed the boat on that one, and given the price differential—now $99/year for Office vs. fucking free for Google—makes the choice that much easier.

The Business of Business

Business is where Microsoft still sees a lot of its sales and profits. Organization that are slower to change and scared of the security implications of the cloud are still using Office, and Outlook by the way. Focusing on its business customer might be exactly what Microsoft intends to do—like IBM, that angle has always been a major part of the company’s profits, so losing the consumer computing crown might not be a major blow. But the younger entrepreneurs and companies I work with in my soulless marketing job are all about Google Docs and Gmail, and it has been a decade since I bought a copy of Microsoft Word. A decade in which I’ve earned my living as a writer in the 21st century. You do the math.

Amazon is less about replacing Microsoft and Apple’s products and services, and more about stepping into the areas these tech leaders have ignored. Though we think of Amazon primarily for its massive takeover of online retail, we’d do well to remember that it started as a bookseller, and that media distribution has been a consistent and long-term focus for the brand. Now they’re getting into content creation in a big way, too, while Amazon Web Services has grown to provide much of the cloud’s backbone, hosting a great number of our online and application experiences. We’re at a point (or past it by a couple years) where software was replaced by content as a consumer goal—software is just a means to an end now, and we don’t want to be bothered with it. The only time most of us think about our software is when something screws up, and as most software moves increasingly to the cloud we’ll care even less.

Amazon is providing the content marketplace and the infrastructure to let it flow. More and more people are turning to Alphabet products for the seamless content chasing they crave. Twenty years from now, these companies might be losing ground to someone else, but for now they look like they’re ready to take on the giants. And we haven’t even started talking about startups…