Well this might change everything forever (leave it to an eccentric engineer worth $11.7 billion to make that sort of thing happen). According to an announcement made yesterday, October 19th 2016, every single Tesla built will now have all the necessary hardware to make them entirely self-driving cars. Not just some of them; all of them. 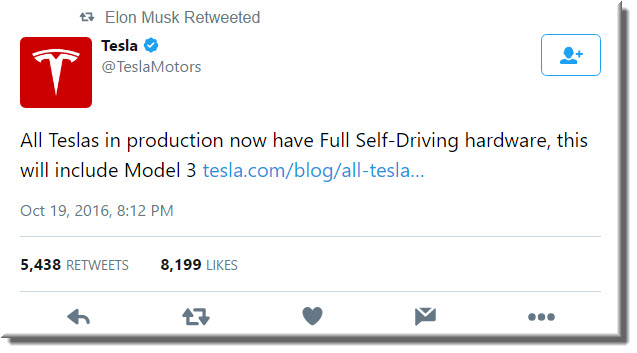 To be clear, not all the cars will hit the road with all the software enabled that is needed to leverage the hardware; features like automatic emergency braking, active cruise control, lane holding and collision warning will remain in testing cycles, being “robustly validated.” The absence will be temporary, however, as Tesla promises to make the software updates over the air as the releases become available over time.

Elon Musk said that his goal is to show the world a car that drives entirely on its own from Los Angeles to New York by the end of 2017. Below is a video the company released with the announcement; it is a cockpit view of a self-driving Tesla navigating a series of complex traffic scenarios.

What makes the decision so disruptive, and likely just as transformative, is that it comes at a time when the ubiquity of self-driving cars, as far as the general public is concerned, has been accepted largely in hypothetical discourse and casual pontification. The technology has yet to prove itself flawless or comforting in the hearts of many drivers.

It was only in May of this year that the first fatal crash occurred while a Model S was in Autopilot mode; Joshua Brown was killed instantly when his car crashed into / under a large truck that was simply making a left turn in front of the Tesla. According to the New York Times, “Tesla told Senate investigators that a ‘technical failure’ of the automatic braking system played a role but maintains that Autopilot was not at fault.” It appears as though the car was unable to detect the truck as an “obstacle” due to the truck’s white color and the reflection of a bright sun.

Another fatal accident in China involving a Tesla Model S—with similar circumstances of a failure to apply brakes in the midst of a large obstacle ahead—also brought into question the role and thus the ultimate safety of the autopilot feature. According to a statement from the company, however, “Because of the damage caused by the collision, the car was physically incapable of transmitting log data to our servers, and we therefore have no way of knowing whether or not Autopilot was engaged at the time of the crash.”

Google self-driving cars and a self-driving car from MIT spin-off, nuTonomy have also suffered well-covered crashes in autonomous driving modes, though neither company has yet faced a fatality.

That all said, it was also found that at the time of the fatal collision, the car was speeding. It’s also very worth noting that Tesla’s Autopilot feature has saved a life…at least twice now.

Surveys of the public have reflected lukewarm outlooks on adoption; one of them has only about 48% of Americans willing to try a fully automated vehicle, while another poll showed that 64% of people expressed the need to always be in full control of their vehicle. Still, Tesla will move ahead with the propagation of self-driving DNA into each and every one of their units. 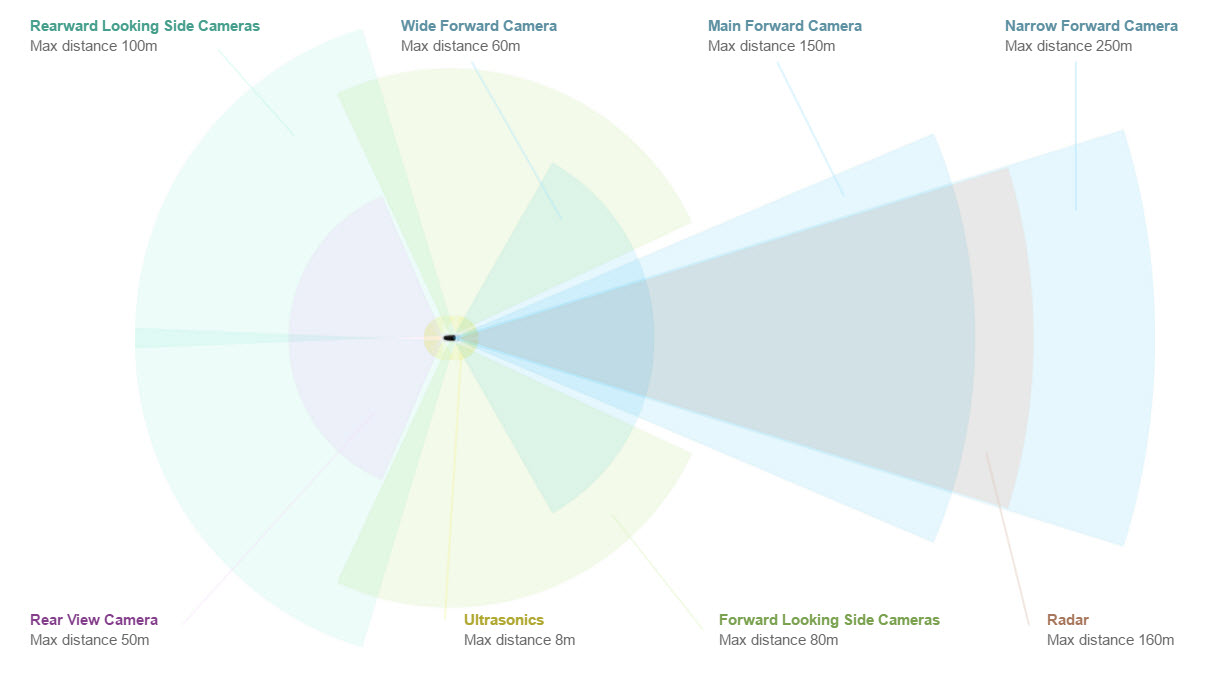 The hardware being implemented covers several components. According to the company,

Eight surround cameras provide 360 degree visibility around the car at up to 250 meters of range. Twelve updated ultrasonic sensors complement this vision, allowing for detection of both hard and soft objects at nearly twice the distance of the prior system. A forward-facing radar with enhanced processing provides additional data about the world on a redundant wavelength, capable of seeing through heavy rain, fog, dust and even the car ahead.

The Tesla Vision component uses deep neural networks to deconstruct the automobile’s surroundings with much greater precision and reliability than prior systems and techniques. With the hardware enabling enhanced autopilot features (the software is expected to be released in December), the cars are promised to better match traffic speed, automatically change lanes when appropriate, exit highways, and self-park, even accounting for prohibited locations–according to a tweet from Musk, “When searching for parking, the car reads the sign to see if it is allowed to park there, which is why it skipped the disabled spot.”

The cars will of course be able to come to you too; there will be a Smart Summon feature accessible from your smartphone that will prompt your Tesla to, according again to Musk on Twitter, “…eventually find you even if you are on the other side of the country.”

With companies like Lyft announcing that they plan to have fully autonomous fleets within 10 years, and cities like Helsinki and Singapore announcing trials of self-driving buses, this kind of initiative injects a whole new dosage of inevitability into a future full of email-immersed drivers and ghost-driven after-school pickups. For many, like the tech-intimate Chinese, this is very exciting stuff. For others, like more than half the population of the US, and the people currently shopping around a script for Dude, Where’s My Car? 2, this may be a little scary.