Tech CEOs have been making all sorts of headlines in these first long weeks of President Trump’s administration. At the forefront of it all is Trump’s so-called Muslim ban—a ban on immigrants from seven predominantly Muslim countries, which Trump swears isn’t intended to discriminate based on religion (previous statements suggest otherwise).

News of the instantly-imposed ban was immediately met with a downturn in tech company stock prices. More than 100 tech companies have joined in a court brief filed against the immigration ban, asserting that the new restrictions will make it hard for them to hire the talent they need. Anecdotal evidence about the importance of immigrants in driving innovation and entrepreneurship are making the rounds of the popular press.

Oracle and eBay were both founded by the sons of Iranian immigrants; we are reminded. Steve Jobs’ biological father was a Syrian immigrant. Alexander Graham Bell, who created one of the world’s most resilient monopolies from what was likely a stolen patent, was Scottish. These shining examples of technical ingenuity and corporate integrity are heralded as ample reason to deny Trump his ban and keep America’s borders open to the best workers from anywhere in the world.

Uber CEO Travis Kalanick’s association with Trump led to major backlash that saw #DeleteUber trending and ultimately forced Kalanick to step down from the president’s economic advisory council, and other companies quickly got savvy. Lyft donated $1 million to the ACLU and picked up plenty of Uber’s former customers, Airbnb offered free housing to refugees, and then there are the 100+ major companies trying to persuade a federal court to rule the ban unenforceable. From Silicon Valley to New York City, tech leaders are making sure they’re on the record decrying the discrimination.

I’m not saying that discrimination shouldn’t be decried. I’m not defending Trump’s executive order in any way, shape, or form. I think it’s motivated by overt prejudices held by the administration and the political base that administration is pandering to. I don’t think it serves our national security interests or any other legitimate purpose. But when companies and CEOs say this immigration ban will hinder their ability to maintain a globally competitive workforce, I regard those statements with as much cynicism and skepticism as I do anything else.

In other words, I’m highly skeptical and highly cynical.

A look at the numbers shows that despite the occasional Horatio Alger story of a Sergey Brin or an Andrew Carnegie, most immigrants aren’t going to find a whole lot of success in the tech sector. Most of them won’t even find jobs there at all. Their kids are slightly more likely to—second generation Americans are also far more likely to have a high school education, which makes getting a tech job a lot easier—but the US could close its borders to all immigrants tomorrow, and tech companies would barely feel a blip.

Who’s Employed in the US Tech Sector

Now, “tech sector” and “tech company” aren’t well-defined terms. The Bureau of Labor Statistics, for instance, includes companies engaged in oil and gas extraction, pharmaceuticals, forestry, and many others under the “High Tech” umbrella. With this broadest of all possible definitions, there were an estimated 17 million tech workers in 2014, with employment in the tech sector. Relatively stable overall but shifting heavily from manufacturing to services—more tech workers are engaged in providing support, system design, software development, etc. than are engaged in building rockets and manufacturing new drugs. 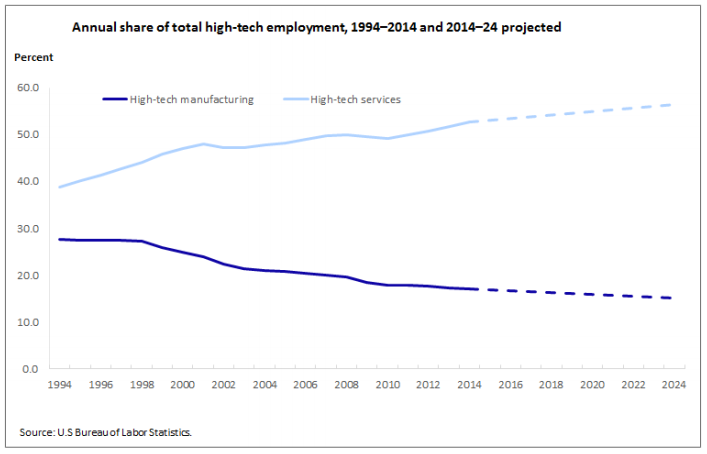 At the same time, tech service jobs are increasingly at risk of outsourcing and/or automation. Those moves have already happened in the tech manufacturing sector. Improved communication and ever-expanding tech expertise in economically advantageous countries are driving outsourcing for a wider range of tech jobs, and increasing AI capabilities are taking humans out of the equation at a faster pace. There isn’t a shortage of US tech workers on the horizon, immigrant or otherwise, because despite the tech sector’s growth as a part of the US economy it isn’t a growing part of the labor force.

Take a look at the number of immigrants employed in the US tech sector, and the assertion that an immigration ban makes hiring the right people impossible becomes even more ridiculous. The US Census Bureau estimates 37 million immigrants ages 25 and older live in the US, more than half of whom achieved only a high-school level education or less. Fewer than a third of adult immigrants hold bachelor’s degrees or higher, while the majority of tech jobs require college-level education, according to the BLS. 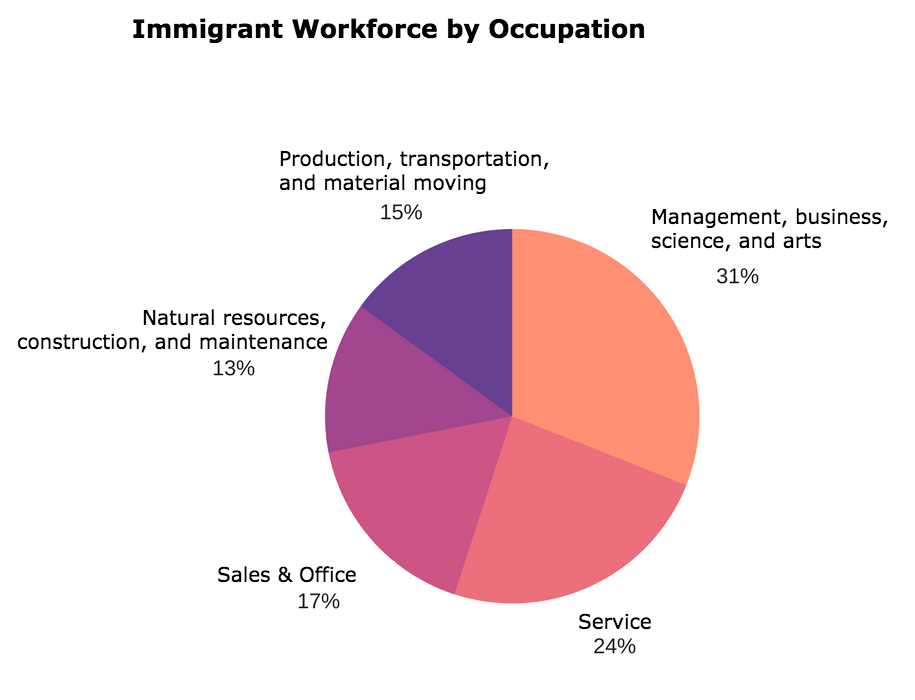 More detailed numbers aren’t available for scrutiny, but even being generous with the number tech of jobs in the “professional, scientific, management, and administrative and waste management services,” we’re only looking at a few million immigrants in tech sector jobs. To put it in another perspective, a grand total of 617,752 visas were issued by the US at foreign service posts in 2016, of which fewer than 13,000 were for employees with needed skills or knowledge and their families. Skilled employee immigrants are coming into the US in a trickle, and they’re going into the tech industry at even lower numbers.

The Pew Research Center puts it yet another way: a smaller proportion of immigrants work in professional, scientific, technical, and management services than do US-born employees, both nationwide and in California (home to more of the tech industry than any other state). Immigrant tech workers certainly exist, but not in any sort of substantial numbers, and given a roll of the dice a US-born worker is more likely than an immigrant to get the next open tech job. That’s been the way of things for years, and even if we open the floodgates to every immigrant who wants a chance it isn’t likely to change. 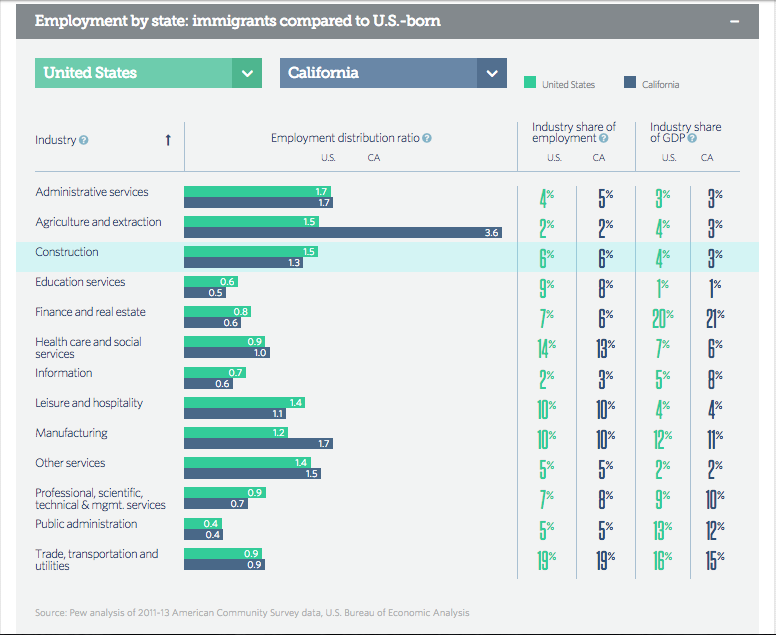 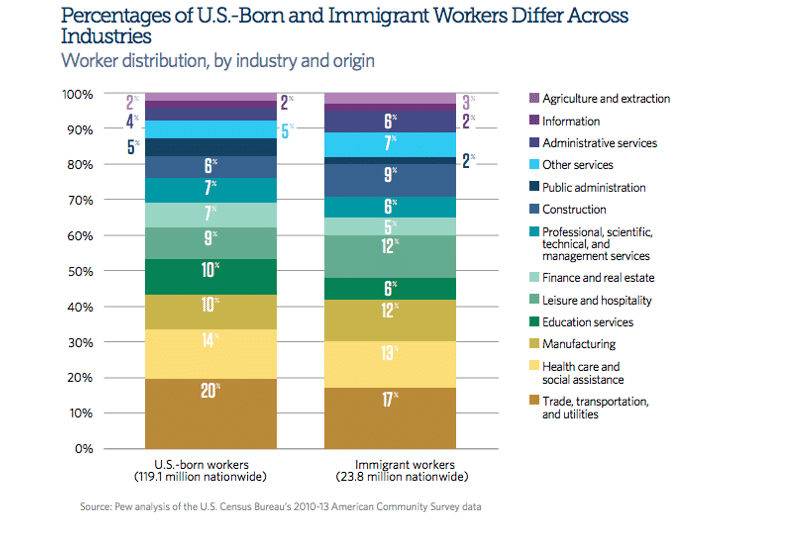 Does limiting immigration mean the next tech genius might go undiscovered? Sure, it’s possible. Same thing’s true of each aborted fetus if you want to get really controversial. But is the US tech industry going to suffer noticeably due to any limitations on immigration? Not likely.

It doesn’t mean Trump isn’t an asshole, or that his attempted Muslim ban wasn’t a racist/religionist policy, or those tech companies shouldn’t tell Trump he’s a racist/religionist asshole. If they’re going to do it, though, they shouldn’t need to justify their commentary with a made-up employment need. They should stand on principle rather than use pragmatism as a political fig leaf. They’ll seem a lot less hypocritical when they automate us all out of work.